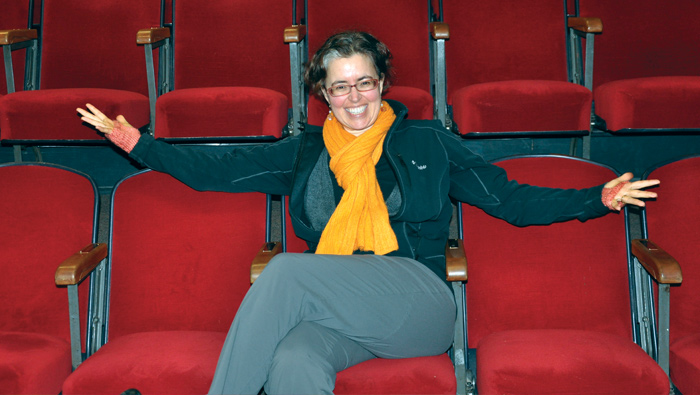 Jewish Theatre Collaborative is going out in a blaze of glory, capping an eight-year run of bringing both beloved and little-known stories of Jewish life to Portland audiences.

Passions were burning as the JTC launched its final season in November with “Aflame – an Album of Jewish Radicalism.” The season continues with a January concert and February Yeshiva learning session before culminating in the March-April mainstage production that inspired all of the programs – “Davita’s Harp,” a coming-of age story of a Jewish girl in 1930s New York City.

The staged reading that brought to life the voices of Jewish radicals (drawn from Dr. Tony Michel’s anthology Jewish Radicals: A Documentary History) was not the only thing that inspired passions; at the end of each of the two packed performances, the audience was deeply moved when JTC Founder and Executive Director Sacha Reich announced they were seeing the beginning of the theater’s final season.

She says many were dismayed and some approached a board member with tears in their eyes.

But Sacha reassures, “We are not in shut-down mode.” JTC has announced that this is its final performance season to provide transparency and to inspire people to participate and experience original Jewish theater this year.

“We are happening,” says Sacha. “We are adapting this incredible, beautiful, powerful, affirming novel written by one of our most beloved American Jewish authors, Chaim Potok.”

While other Potok novels have been adapted for stage, this is the first staging of Davita’s Harp. Potok’s wife, Adena, whose life served as source material for the novel, has been reading the adaptations and providing additional insight, says Sacha.

“We’ve been trying to seed stories and messages into the groundwater of the community,” says Sacha of JTC’s eight seasons.
This year’s production of “Davita’s Harp” explores increasingly relevant and important themes, she adds.

She describes the play as an exploration of American identity and “what happens when the melting pot feeds and nurtures the next generation. Rather than differences dividing, there is nourishing, and she (Davita) integrates and comes through and emerges as an independent, thinking, questioning, compassionate human being.”

Set against the Depression and the rise of international fascism, Sacha says the story stresses there is much we cannot control, “but we have to be responsible for what we do have control over.”

During the play, Sacha says the audience will see “the formation of this person before your eyes. It happens not in huge moments but in mundane actions.”

“The story is populated by sensitive, ethical adults taking responsibility for the choices they make and concerned about the world they live in,” she continues. “It’s so relevant. Our world is in upheaval and violence increasingly is part of our world. We should be conscious and responsive in our lives.  … The choices we make, make us.”

Last spring the JTC staff and board had the choice of stopping then or producing one final season. They chose to do one more season “to write the end of the story.” Sacha says that knowing this is the final season has provided clarity. Not having to begin building next year’s season gives JTC “the space to do art well … to create world-class theater.”

However, JTC will not go extinct; the nonprofit theater will maintain its 501(c)3 status and retain its assets, including traveling shows and original scripts by Sacha, some written in collaboration with other members of the company.

Following the conclusion of this year’s mainstage production in April, the board and other supporters will convene to determine how to manage JTC’s assets and “under what circumstances it might be used in the future.” For instance, JTC’s touring show “Life, Liberty and the Pursuit of Well-Being: The Story of Lillian Wald” has received foundation grants for performances in 37 schools across east Multnomah County this school year. The play about the social reformer and founder of community public health nursing has been used in the health and wellness curriculum of Portland Public Schools.

Five thousand students will get a dose of civic history to inform and inspire them to be agents of change in their community,” says Sacha.

Another touring production, “Hanukkah: The Power of Light,” has been a staple of the holiday celebrations at Cedar Sinai Park for several years.

“JTC was always part of our Hanukkah celebration,” says David Fuks, who last fall retired as CSP CEO. David, who knew Sacha even before she created JTC, says that CSP also has taken residents to many JTC productions through the years.

“Sacha is something of a genius,” says David. “From a cultural perspective, she is one of the best things to happen in the Portland Jewish community. She expresses her Jewish soul and feeds the spirit of the rest of the community.

“Her productions have introduced us to excellence in Israeli playwrights, brought to life unexpected works of Jewish literature and created a cultural experience that has been remarkable. We need to celebrate her marvelous contribution and to hope at some point she will find new ways to make theater available that speaks to the Jewish community.”

In a letter to supporters in September, Sacha and Interim Board President Layton Borkan wrote:

“At the conclusion of this season, we will have created 24 original works that have reached over 20,000 audience members with characters and stories that have taken up residence in their hearts and minds, shaping the way they view and understand the world.”

In 2008 JTC began with “Israel Onstage.” In 2011, Sacha created “Charlotte Salomon’s Life? Or Theatre?” which Jewish Review Editor Paul Haist called “profoundly stimulating theater … uncommonly sophisticated.” Two years later Sacha drew on a successful element of the previous five seasons to create JTC’s first season-long Page2Stage production. “A Pigeon & A Boy” introduced audiences to stories of love and loss from British-mandate Palestine of the 1940s through modern-day Israel. Last season the surreal era at the dawn of Argentina’s Dirty War came to life for audiences in a season-long exploration of “The Ministry of Special Cases.”

Sacha says she hopes parents will take advantage of this year’s production to both inspire intergenerational conversations and to introduce their children (ages 13 and older) to the works of Chaim Potok, whom Sacha describes as an important influence on those of her generation.

A Portland native, Sacha moved to Israel in 1990, graduating from Hebrew University before spending three years training as a director at Seminar Hakibbutzim in Tel Aviv. Her grad project involved a Hebrew version of Shakespeare’s “Twelfth Night.” She served as the dramaturge (providing context and history) for a

Hebrew production of “The Comedy of Errors.” “I had a background in Shakespeare, so I was involved in the development of the translation and understanding the nitty-gritty of what is embedded in the lines,” she says.

In 1997 she moved to New York and then to the Bay area, where she had a theater company. She and her husband, Aaron Pearlman, also a Portland native, returned to their hometown in 2002 “to re-root ourselves here and to contribute to the growth of community here.”
The family, which now includes Lev, 15, and Ravit, 11, are members of Havurah Shalom. Sacha says her next “production” will be Ravit’s bat mitzvah in the fall.

Initially Sacha taught Judaic studies at Portland Jewish Academy, and her theater work was outside the Jewish community. She directed two productions and served as the artistic associate for Miracle Theatre Group, aka Milagro Teatro, where JTC has been in residency for the past three years.

Sacha says the partnership with Milagro has given JTC the stability to accomplish what it has done over the past three years.

Milagro Founder and Executive Director José González says the two theaters share the goal of creating space for voices that are not being heard elsewhere. He is impressed by JTC’s

Page2Stage approach to that mission.

I marvel at the courage to take a hard path to adapt novels to the stage to expose people to different aspects of Jewish history and culture and tradition,” says José.

Finding a universal message and connecting the story to current reality has always been a focus for JTC. For instance, Aflame was created to provide historical context for “Davita’s Harp,” but then talkbacks brought the conversations into the present. “We took audiences back for a firsthand encounter with the voices of Jewish radicals of the teens, ‘20s and ‘30s in New York City. … The staged reading performances were followed by facilitated talkbacks.

What is the relevance of these ideas now? That is what we are always  trying to do – provide historical context and relevance to today.”

“People left Aflame really excited about the encounter with the history and the ideas,” says Sacha, noting this final season seems increasingly timely in today’s chaotic world, where for the first time in 60 years “people are able to talk about socialism on national TV. … How did we get from the 1930s to 2015 with a Democratic socialist running for president?”

Noting that people find connections in different modalities inspired the other programs leading up to the mainstage production.

“This novel is really oral,” says Sacha. “The girl grew up with sounds – conversations and the sounds of harp music was a constant with every coming and going.”

Since when reading a novel, “you don’t know what that might sound like,” Sacha says the JTC decided to create a concert. “Music touches and moves us in a way other art forms don’t.”

So JTC invited the musicians who have worked with the theater over the years to create music inspired by the novel, “music evoking these different influences in Davita’s life.” On two January evenings, Jack Falk, Cantor Ida Rae Cahana, Andrew Ehrlich, Courtney Von Drehle and Ralph Huntley will present a musical collage featuring Shabbat melodies, psalms, Yiddish music, communist and socialist tunes, and beautiful art songs – but no harp.

These musicians are music interpreters,” says Sacha. “They are in conversation with the music.”

For those seeking a different entry point to Davita’s world, JTC offers A Taste of Yeshiva. The first session in February is nearly full. But another class will be offered in early April for those whose curiosity is provoked by the play.

“I think only a small part of our audience has exposure to text study in that setting,” says Sacha. Rabbi Tzvi Fisher (of the Portland Kollel) has put together a text study class that gives that firsthand experience, but also is about content relevant to the novel – what is our responsibility for our brother, our neighbor.” The class uses texts from Rabbi Akiva, who is central to the novel as a source of inspiration and object of study by Davita.

Creating new programs and new theater is very resource intensive, says Sacha. JTC also faces the same challenges as many arts organizations in today’s economic climate. Philanthropic giving to the arts has not recovered to pre-recession levels, and public support for the arts in schools and other areas has fallen over the past decades. Funding has been an issue for JTC, even though the well-respected theater has received funding over the years from about 120 individual donors (including Portland theater benefactress Ronni LaCroute and Willakenzie Estates), as well from foundations and organizations including the Oregon Cultural Trust, The Oregon Community Foundation, Harold & Arlene Schnitzer Care Foundation, The Collins Foundation, the Jewish Federation of Greater Portland, Cedar Sinai Park and Milagro.

“As a country we don’t support the arts sufficiently to make them sustainable,” says Sacha. “The arts are sustained on the backs of artists.”

Those realities have prompted JTC to curtail its programming.

Yet, the organization and its assets will remain – and with those glowing embers, when conditions change, the fire may once again ignite, bringing warmth and new cultural landscapes to Oregon.