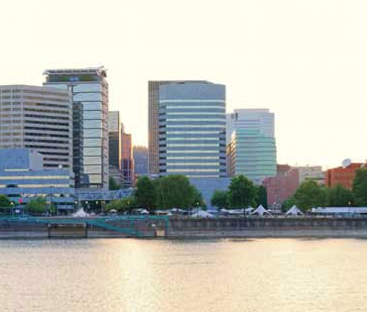 You’ve brought your camera to a Portland Timbers game and have so much to do. You scamper up the stadium for a panorama of Jeld-Wen field, hike for a closeup of your family in the stands, run to that fan with his giant balloon, and – here comes a goal. But, what if you could snap the panorama, the expression on your daughter’s face, the cartoon on the balloon and the team’s reaction to the goal – all at the same instant?

Enter GigaPan Systems, a company based right here in Portland. Using high-resolution panoramic photography technology developed for the Mars Rover, you’ll capture these images and more with just one snap. Mount your digital camera in the small vice-like device, set the top-left and bottom-right, then shoot. Hundreds or thousands of high-quality digital im- ages are created as the device repeatedly moves your camera and snaps. Accompanying software on your Mac or PC stitches the images together to create one interactive panorama. Now zoom in for the finest detail or zoom out for the big picture. Find that needle in the haystack or view the whole farm with the same digital photo.

“This is actually a robot, but it won’t talk to you,” said GigaPan CEO Josh Friedman during a recent interview. A Portland native, he grew up at Congregation Beth Israel, graduated from Oregon State University and started his marketing career at Intel. He launched strategic partnerships at Tripwire, founded the hotel software company Eleven Wireless, co-founded NedSpace, an entrepreneur’s office facility, and served as COO for the music licensing company Rumblefish. “My career has been this interesting path winding through technology,” he said. “I came to this opportunity because GigaPan was looking for a new CEO to grow the company to the next level.”

Friedman replaces Henry Hillman Jr., a Portland entrepreneur, who along with Carnegie Mellon robotics professor Illah Nourbakhsh and NASA scientist Randy Sargent, took technology developed for photographing Mars and turned it into a consumer product. That was in 2008. Today the GigaPan Robotic Camera Mount comes in three models, GigaPan EPIC ($299) and close up, too for compact digital cameras, the EPIC 100 ($449) for point- and-shoot cameras and small DSLRs, and the EPIC Pro ($895), which holds a camera and lens up to 10 pounds. Use GigaPan’s free software to upload your panorama, or try their new online print service and have a hard copy delivered to your door.

“We can print a 20-foot poster of Cape Town,” said Marketing Manager Alicia Hunt. A lifetime Congregation Beth Israel member, she played tennis during her years at Catlin Gabel and won the Oregon State Championship twice. Birthright Israel (birthrightisrael.com), a program that provides free educational trips to Israel for Jews between the ages of 18 and 26, comes up quickly when she talks about her memories. “It was life-changing, one of the best experiences I’ve ever had. Just to see the history, learn about my heritage and learn about Judaism and the culture.”

After majoring in business and marketing at Trinity University in Texas, Hunt returned to Portland and found a great opportunity at GigaPan. People can take cityscapes of Portland, she said. “Last summer, they (the Olympic Marketing Department) GigaPaned eight major Olympic events. So many people at- tended, and now they can visit the events again.”

GigaPan’s own website (GigaPan.com) includes gorgeous interactive photos of Oregon. Friedman and Hunt’s planned enhancements include 360-degree home tours and Portland scenes. “The company has a solid foundation,” Friedman said. “The challenge is to continue to build a system that consumer and professional photographers find valuable and turn this into a world-class company. I’d like to see GigaPan images all over the world.”

Polina Olsen is a Portland- based freelance writer and author.