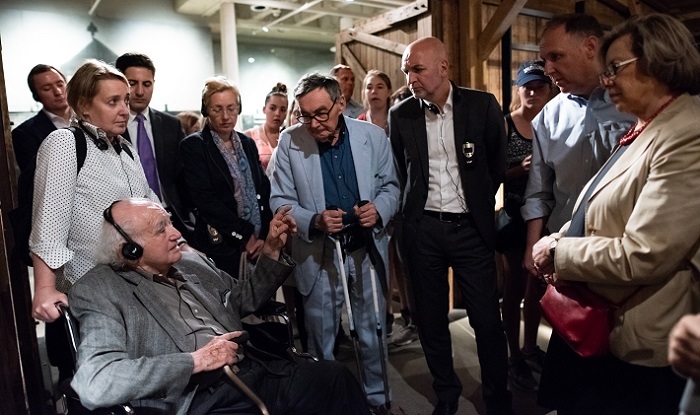 PHOTO: Holocaust survivor Roman Kent shared with the German representatives (including with German State Secretary Dr. Rolf Bösinger) and museum goers his personal experience of being deported to Auschwitz and the horrific conditions he endured.

A significant increase in funding for social welfare services for Holocaust survivors was announced on July 10 in a ceremony at the U.S. Holocaust Memorial Museum in Washington, D.C.

Julius Berman, president of the Conference on Jewish Material Claims Against Germany (Claims Conference), announced the outcomes from the organization’s negotiations on behalf of Jewish Holocaust survivors with the German government. “The significant increase for social welfare services secured by our negotiating team will lead to more home care, food support, medicine and transportation services for Jewish Holocaust survivors around the world,” said Claims Conference President Berman.

The negotiations resulted in a €75 million ($87.75 million) increase in funding for social welfare services for Holocaust survivors, bringing total global allocations for 2019 to €480 ($564 million).

With the U.S. Holocaust Memorial Museum in Washington, D.C., as a backdrop, the German delegation met with the Claims Conference negotiating delegation and heard first-hand testimony from survivors about the critical need for funding increases.

Claims Conference Special Negotiator Ambassador Stuart Eizenstat stated, “I am particularly pleased as we enter the last stage of a more than 70 year effort by the Jewish Claims Conference to work with the German government to provide a measure of justice for Holocaust survivors, that the recently formed new German government has shown that they share our sense of urgency to insure that in their declining years Holocaust survivors, who suffered so greatly in their youth, live their remaining years in dignity. We have been able to get a major increase of some $200 million in additional funding for critically important home care and in monthly pensions for survivors.  Over the last decade, we increased funding for home care from €30 million to €405 million in 2018, and, now, to €480 million in 2019.”

Of the negotiations, Claims Conference Executive Vice President Greg Schneider said, “Although no amount of money can ever compensate for the indescribable suffering and losses of Holocaust survivors, these elderly heroes deserve the recognition that increased payments and much-needed services will provide.  It’s been over 70 years since the war ended and time is running out for survivors.  We need to ask ourselves: if not now, when?”

Survivor representatives of the Claims Conference delegation, Roman Kent and Marian Turski, both survivors of the Lodz Ghetto and Auschwitz, accompanied German officials on a tour through the museum.  A cattle car in the museum’s permanent exhibition served as an impromptu setting where Roman Kent shared with the German representatives and museum goers alike, his personal experience of being deported to Auschwitz and the horrific conditions he endured.

Kent said, “When I am asked how long I was in Auschwitz, my answer is … I don’t know.  What I do know is that one minute in Auschwitz was like a day, a day was a year, and a week an eternity.  How many eternities can one have in a single lifetime?  I don’t know the answer to that either.”

The Claims Conference negotiating delegation is continuously advocating for Jewish Holocaust survivors with the German government throughout the year to address unmet needs and expand criteria for compensation.  In addition to the funding increase for social welfare services, negotiations this year achieved the following:

The Claims Conference currently funds in-home care for approximately 76,200 needy and frail survivors around the world, so they are able to remain in their own homes.  Additionally, the organization assists over 62,000 survivors with other vital services including food, medicine, transportation to doctors and programs to alleviate social isolation.