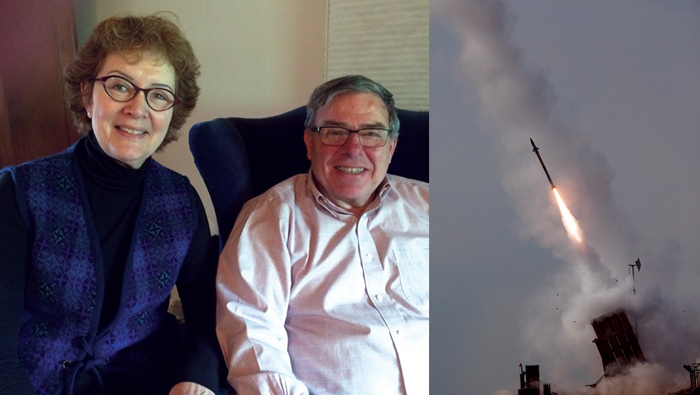 When Emanuel and Connie Ben-David retired, they wanted to move to an affordable place with good climate and a strong Jewish community. They researched the best places to retire in the United States and when Ashland popped up over and over, they decided to fly out here and check it out. It was a long flight, however, since Emanuel and Connie were in Israel retiring from careers as defense systems engineers.

Born and raised in Haifa, Emanuel had studied defense since he entered a high school naval academy at age 13. The Navy then sent him to Technion, a high-level engineering school, and when he entered Israel’s Navy as an officer with a degree in mechanical engineering four years later, he went right to work on weapons systems. He quickly became the person responsible for the high-level maintenance of things like fire-control radars, optical directors, missiles and hydraulics.

He enjoyed the independence as well as the range of subjects – everything from submarines to missiles. “My peers were electrical engineers and didn’t know what I was doing, so I was the authority in my field.” He says that having a 22-year-old in charge is not uncommon in Israel.

In 1982, at 27, Emanuel joined Rafael Advanced Defense Systems, which at that time was part of the Ministry of Defense. He entered at the lowest level of mechanical engineer, but he was working on some cool stuff, such as early versions of infrared night vision systems. In 1985 the Israeli Navy ordered new periscopes for its Gal-class submarines from a company called Kollmorgen in Massachusetts; Kollmorgen, in turn, was buying the infrared subsystems from Rafael. Emanuel was the program manager responsible for everything from initial design to manufacturing. Connie was the contract manager at Kollmorgen.

“My husband at the time was Jewish, a first-generation Russian, and he had that ethnic culture that said ‘we need to know this guy from Israel! Let’s have him over,’ ” Connie remembers. “Over the course of roughly four years, through multiple design reviews and as the production developed, Emanuel and I were in constant communication, and my husband and I became friends with Emanuel and his family. We’d visit each other, and even after the work was over, we stayed in contact.”

During the first Gulf War, for example, Emanuel was in the reserves when the first rocket attacks hit Israel from Iraq. He and his family were in a sealed room to protect them from chemical attacks when Connie called him from the States. “It’s dangerous! Send your kids to us!”

Emanuel eventually had the opportunity to work on some of the most exciting defense projects in Israel, arguably in the world. He was, for example, part of the design team that created “Litening,” a system with an infrared sensor, camera and laser equipment that enables aircraft to find, identify and target a threat, day or night, at any speed. Like many Israeli innovations, this system actually evolved from early designs that were focused on a specific problem.

“In 2002,” Emanuel explains, “around the Second Intifada, snipers were shooting into Jerusalem from houses in Bethlehem, and the Israelis could not figure out who was shooting. Our department quickly developed a system called Spotlight that would stare at Bethlehem and, when a shot was fired, it would put a cursor on the spot where it was fired. Once deployed, the sensor could detect the threat and eliminate it. We were able to make the time span between detecting the shot to responding to it very short, so the tank shell was at that guy within a minute.” Once they could do that, Emanuel says, “the shooting stopped completely, right away.”

The famous Iron Dome system built on this work. Emanuel was also a part of that team. “The problem is,” he explains, “you have a Kasam missile maybe 6” in diameter or even less, flying erratically, flight time (from launch to target) about 15 seconds. From the moment it is fired, one has to know that it was fired, determine where it is going to fall and then make a decision. If it’s going to a populated area, you want to intercept it, but you have to fire the interceptor, hit a small object and do it far out from the populated area so the shrapnel that falls won’t be too dangerous.” And, he adds, you have 6-8 seconds for the whole process.

When Rafael started working on this, nobody knew if it was even feasible. As a matter of fact, Emanuel says with a laugh, “Everybody said we were out of our minds.”

Three years later, it was operational. Over the years it has intercepted hundreds of missiles at unprecedented success rates.

Back in the States, Connie had moved to the space division at United Technologies. “I was working on the space shuttle, the space station, space suits. I was also going all over on tours with the space suits, teaching kids what it was like to be in space.” She loved her job. In 1999, though, she suffered multiple traumas in a short period of time, including the loss of her husband. Her rabbi and her boss at United Technologies arranged for her to take a six-month sabbatical in Israel so she could do a beit midrash, study at Hebrew Union College and regroup. Her friend Emanuel found her an apartment. He and his wife were separated, and as Connie and Emanuel spent more time together, she says, “One thing led to another!”

Today they are renovating – by themselves – a house they bought within five days of arriving on a Friday in 2013 to check out Ashland. They had gone to services at Temple Emek Shalom, and one of the congregants introduced herself and invited the newcomers over for dinner. Before long, it became a kabbalah Shabbat potluck with 16 people. “If this is the kind of community they have, that’s it for us,” they agreed. Today Connie is active on several temple committees, but she jokes that she is really a “temple widow” because Emanuel’s involvement includes the religious practice, human resources and search committees; adult education; teaching Torah from time to time; and often leading services when the rabbi isn’t there.

Emanuel has also prepared a series of lectures about Israel that he has delivered at their synagogue, at Havurah Shir Hadash in Ashland, in Coos Bay and at the Medford Church of Change. He gives context, statistics and concrete examples to counteract the negative information he says is too common in the media. The first series, for example, focuses on what Israelis are really like and why, and how these traits help explain why “the innovation and creativity of Israeli inventions is probably higher than the rest of the world.”

Emanuel and Connie believe that Americans have trouble rebutting the negative news they hear about Israel because they do not have enough accurate information. Emanuel cited a survey by Foreign Policy Magazine, which documented the number of times the U.S. State Department counted an act of state that was unacceptable. “Israel was the fourth-worst place in the world, behind Syria, Iran and North Korean, and just better than Pakistan. We are an ally. What’s wrong with this picture?”

Under-reported are the good stories, Emanuel says, like all the Syrians who are being treated in Israel. He also tells how Hamas leader Ismail Haniyeh called the Israelis for help when his daughter needed medical treatment. The Israelis took her to one of the best hospitals in Tel Aviv. “Can you imagine Saddam Hussein calling George Bush and asking for medical treatment for his son? Can you see Bush sending a helicopter to bring him in?”
“Emanuel is eager to engage in these activities, even as he is retired,” says Connie. “He is a patriot.”