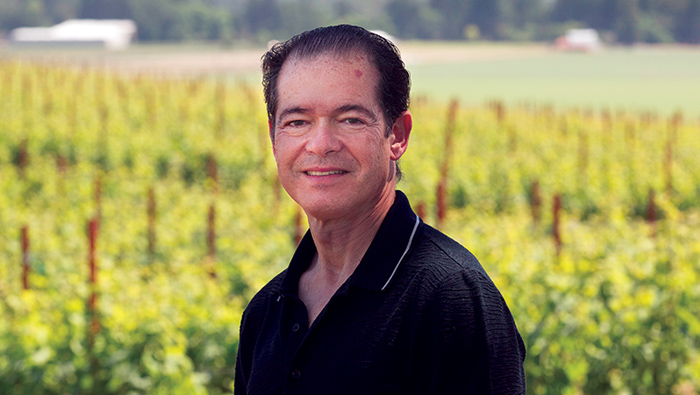 Last fall, our dear friends Joel and Mia stayed with us a few days en route from their home in Vancouver, B.C., to their winter digs in Arizona. Even with all that time in the car, they wanted us to join them for a side trip to her cousin Larry’s new vineyard just south of Salem.
“We grew up together in Seattle,” she told me. “He is like a brother to me.” That was enough for us. Off we went.

It turns out that Larry Stone is not just a nice Jewish boy who owns 66 acres of prime pinot noir and chardonnay land with a view of Mt. Hood. He was a child prodigy who made his own wine at 14 and his own whisky at 16. He majored in chemistry at the University of Washington and became a Fulbright Scholar, studying comparative literature in Germany. Then when he was teaching English, film studies and Spanish at the University of Washington, and writing about Nietzsche’s role in contemporary literary criticism for his Ph.D., a bartender friend dared him to apply for a job as a sommelier.

“You know more about wine than real sommeliers,” the friend said. The restaurant manager grilled Larry with questions from Alexis Lichine’s Encyclopedia of Wines & Spirits. It turns out a girlfriend had given Larry the 713-page book as a gift a few years earlier, and he had practically memorized the thing. Larry aced it. And the rest, evidently, is history.

Larry went on to manage the wine cellar at The Four Seasons in Seattle and at Charlie Trotter’s in Chicago, preside over Francis Ford Coppola’s winery, become a Michelin-starred restaurateur, an award-winning international wine consultant, an in-demand wine judge and sommelier educator, and a winery founder and CEO. Also – almost forgot! – he was named the best sommelier in America in 1986 … and the best sommelier of French wines in the world two years later. This is a partial list.

His vineyards were thriving and beautiful when we visited with Joel and Mia last fall, but I went back this spring when the winery itself was up and running to try to figure out how all this came to pass. The first piece of the puzzle – besides his broad curiosity about the world around him and his astonishing photographic memory – is that an understanding and appreciation for food and wine is in his blood.

“My grandmother’s father’s mother sold fruits and vegetables in Vienna,” Larry explained. “On the other side were bakers in Galicia or in Tarnow, Poland. My mom’s family were farmers in Bistrita, in Romania. Her maiden name was Weinberger, which is a person who has a vineyard and makes wine from the grapes they grow.”

Larry grew up in a household that was all about fresh, natural food. His father was a greengrocer at the Pike Place Market in Seattle, and Larry learned at his knee to tell when produce was at its peak. He also roamed the market and tasted anything put in front of him. Years later, one of the crucial questions put to Larry for the title of the world’s best sommelier of French wines was about an obscure French cheese. No problem.

In addition, Larry’s mother was fabulous in the kitchen. “I grew up cooking. My mom would make a stock and ask me how it was. I’d say, ‘delicious,’ but she’d say, ‘Taste it again. Too many carrots.’ She worked with my dad and my uncle, so when I was in second grade I started making dinner.” He cooked his way through Julia Child and, he says, he knew all the French sauces before he left grade school. The other kids would bring PBJs for lunch. Larry would pull out his salad greens, whisk up a vinaigrette and eat that.

His cousin Mia backs him up. “Our mothers were sisters and were incredibly close,” she remembers. “We were together every Friday for Shabbat, every holiday. His dad used to go to the market to get the best meats, fish, fruits. I don’t mean expensive, I mean good quality. His mom was an unbelievable cook. She peeled each mushroom. When she made a chocolate cake, the frosting was absolutely beautiful. And Larry learned all that.”

His parents also believed that children should know about how tastes work in harmony, so he was doing blind wine tastings with them – just tiny sips – by the time he was 7. He was pairing wine for his parents to go with dinner when he was 12. All that, coupled with his extensive study of languages, enables him now to taste the subtleties of flavors in wine and then articulate them clearly so his customers end up with a wine that suits their individual tastes and complements their food to perfection.

Today, as founder and CEO of Lingua Franca in Eola-Amity Hills, Larry is in a unique position to see his own vision for growing quality grapes and producing special wines come to fruition. Kimberly Abrahams, 30, is his assistant winemaker, and she is thrilled to be part of his team. “People say to me, ‘You work for Larry Stone? Wow!’ ” She is especially excited about the way they farm, all organic, all natural, based on “respect for the land. It is his commitment to say thank you to the land, to honor what the vineyard is capable of.”

While Larry still travels the world as a wine consultant, he is happy to be on this land, at this time, in Oregon. Larry, his family and their team put their hearts and souls into every vine, into every bottle. Kimberly notes how they sit down together to taste all the lots from the vineyards and create blends based on what the vineyards represent. They select local artists to design their labels. They put themselves into every carefully chosen wine name.

Larry is most proud of their “Sisters” chardonnay, named for his mother, Rachel, and Mia’s mother, Aida. The two sisters were imprisoned during the war; they managed to stay together even at Auschwitz. Rachel contracted typhus and barely survived the death march to Bergen-Belsen. When they were liberated, Mia says, “Stockholm was willing to take very sick people. My mom convinced the doctor to let her pretend to be sick so she could go with Rachel to Sweden.”

“My mom woke up in Sweden,” Larry told me. “She rehabilitated there and worked painting ceramics.”

Larry’s dad served in the Austrian army and, after several failed attempts and one refusal by the Swiss, had to walk through Switzerland to Belgium, where he was eventually evacuated to England. A Jewish organization helped him get to the United States, where he joined the U.S. Army and, through that, became a citizen. “He was stationed at Fort Lewis,” Larry says. “Seattle reminded him of Austria, so he moved there after the war.”

Meanwhile, Aida had married a Swedish citizen and moved with him to Seattle. Rachel visited Aida there, stayed for a while and met her future husband. And the rest is history.

Yes, of course I bought a beautiful bottle of the Sisters wine. Next time Mia and Joel come through Portland, we will clink our glasses and sip it together.