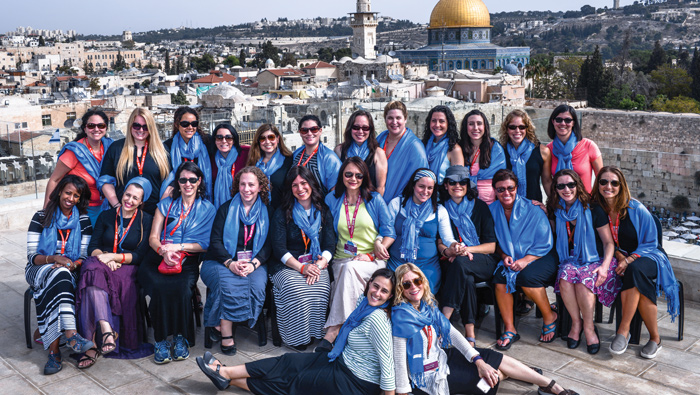 Last year 50 Oregon moms took advantage of free trips to Israel and returned full of enthusiasm for Judaism and the Jewish state – an enthusiasm they have shared with their families and community.

This year about 44 women are invited to take advantage of that same opportunity to discover the richness of their heritage courtesy of the Jewish Women’s Renaissance Project in collaboration with the Israeli government.

In 2008, eight Jewish women who wanted to empower and inspire women with the rich beauty of their Jewish heritage created JWRP and Momentum, an eight-day journey through Israel. Since then more than 6,500 women from 19 different countries have experienced this life-changing trip, paying for only their own airfare.

In addition, husbands of moms who participated last year or who sign up this year are eligible for a heavily subsidized men’s trip in June.

“Women who went on Momentum want to be on the same page as their husbands,” says Eve Levy, who led the Portland contingents on both of last year’s trips.

While Birthright shows young adults a Jewish nation, Momentum participant Sandy Nemer says Momentum shows moms “the soul of Israel.” Sandy was on both of last year’s Portland trips – the first as a participant and the second time as a madrikah (helper) for Eve. “This trip is not just a tour. The trip is designed for mothers to have a glimpse of what Israel is and how Judaism can influence their life.”

“The trip impacted my role as a Jewish mother,” says Sandy. “Now I can infuse the passion for being a Jewish American based on my trip to Israel.”

Sandy says women on the trip bring back experiences and passion that benefit the community in general as well as their own congregations. Women come back with an amazing sense of their Jewish heritage that they can share with both their families and other families in their synagogue.

“Momentum is a women’s retreat on steroids,” she says.

Portland women from last year’s trips created Shine, a women’s group that has sponsored a variety of programs designed to share their enthusiasm. In December the group hosted two programs featuring Paula Shoyer, author of The Kosher Baker.

This year Portland-area moms are invited to apply for a free trip May 15-24 (airfare and tips not included). A second trip in December will be available for another group of Oregon moms.