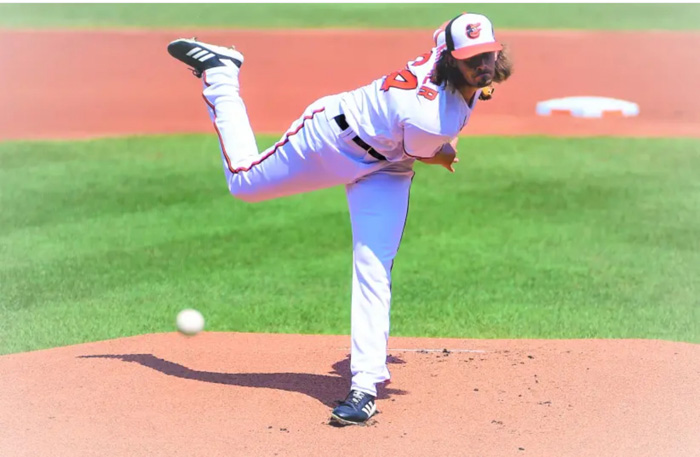 Dean Kremer, the first Israeli to be drafted by a Major League Baseball team, made a stunning debut on Sept. 6 for the Orioles by dominating the Yankees in Baltimore for the first win of his career. Kremer outdueled New York’s two-time All-Star Masahiro Tanaka for 6 innings, giving up only one hit and one run while recording 7 strikeouts.

On a day that the Orioles saluted Cal Ripken Jr. by having their Iron Man throw out the first pitch to mark the 25th anniversary of “2,131” (his incredible record for consecutive games played), Kremer rekindled the hopes Orioles nation with dazzling first pitches of his own. Kremer struck out the Yankees leading hitter DJ LeMahieu as well as their HR leader Luke Voit, and then retired veteran Brett Gardner for a perfect 1-2-3 opening frame against the Bronx Bombers. In the bottom of the first, DJ Stewart lined a two-run homer off Tanaka, giving Kremer all the support he would need.

The first inning may have seemed like a dream for Kremer who began his day at the Orioles alternate training site, before being promoted and given the ball the very same afternoon. However, his second inning provided a “Welcome to the Show” wake-up call for the 24-year-old rookie. Kremer fell behind hitters, sandwiching two walks around a sharp single to load the bases. This led him to perhaps his finest moment of the game. Maintaining his composure, Dean allowed only a run-scoring ground out and struck out the last batter, stranding the tying run 90 feet away.

Kremer and Tanaka continued to trade goose eggs, with Kremer showing off his biting curveball and mid 90s fastball over the next 4 innings, living up to the hype that the right-hander had generated for himself over the last two seasons in the Minors and justifying the deal that brought Dean to the O’s in a rebuilding gambit that sent Manny Machado to the Dodgers. Last year Kremer complied a 2.98 ERA in 15 starts with their Double-A  Bowie Baysox, and the previous year, 2018, he led all Minor Leaguers with 178 strikeouts.

As the game wore on, Kremer showed his talent, retiring 12 straight Yankees after allowing his only run. Then in the top of the sixth, with Kremer nearing his target pitch count, while clinging to a narrow 2-1 margin, something happened that proved his heart is as big as his arm. Slugger Luke Voight was awarded a walk, benefitting from not one but two called balls that looked like strikes. With the tying run on base and lead run at the plate, Dean hung tough and got the final outs of his stint to preserve his lead- his last two strikes were a 96 mph fastball and a nasty splitter that gave him his seventh strike out.

The Orioles then added 3 insurance runs and their bullpen shut down the Yanks, preserving Kremer’s precious first win. After the game, Orioles Manager Brandon Hyde remarked that he was most impressed by Kremer’s composure

On Sunday, as Kremer took the mound in Baltimore, the Yankees’ TV broadcaster welcomed him with a hearty “Mazel Tov” and the Orioles flashed a Team Israel Mazal Tov Tweet. It was a holiday for Kremer and all of Israel. Born in California to Israeli parents Adi and Sigal, Dean was drafted by the San Diego Padres in the 38th round of the 2015 MLB draft. He was the first Israeli to be selected in the draft, but he decided not to sign.

He was drafted again the following year by the Los Angeles Dodgers in the 14th round and this time, did sign a contract.

Kremer is the second Israeli citizen – and first pitcher – to reach the majors. Ryan Lavarnway has played for the Miami Marlins earlier this year, now as an Israeli citizen after making Aliyah last winter to be eligible to suit up for Israel in the Tokyo Olympic Games.

In international competition, Kremer pitched for Team USA in the 2013 Maccabiah Games, winning a gold medal. Since then, he has pitched for Israel national teams five times, starting with the 2013 Under-18 tournament in Cyprus and then in the 2014 and 2015 European Baseball Championship qualification campaigns. He won the Most Valuable Pitcher award in both tournaments. In September 2016, Kremer recorded the last out against Great Britain at the New York Mets’ AAA Coney Island Stadium to advance the Israeli team to the next stages of the World Baseball Classic in Korea and Japan in 2017, where it finished sixth (with Lavarnway the team’s MVP).

Kremer speaks fluent Hebrew and had his bar mitzvah in Israel while spending time every year in the Holy Land. His positive attitude has made him a favorite among his teammates, coaches, and especially the Israeli kids he coaches when he’s here. On Sunday, Team Israel general manager Peter Kurz and Israel Association of baseball President Jordy Alter sent Kremer congratulations.

Kurz hopes to see Dean pitch for the blue-and-white at next year’s Olympics in Japan.  Beyond that, Peter dreams of a one-two righty-lefty starting combination of Kremer and Atlanta’s Max Fried anchoring Israel’s next WBC team. Why not? As Dean Kremer proved today with his first win, “If you will it, it’s not a dream.”