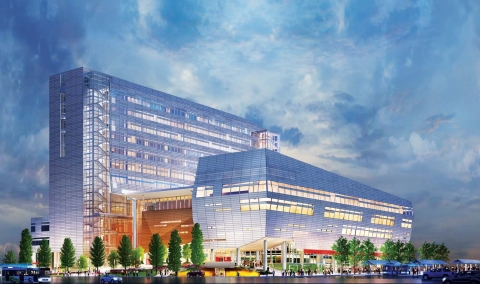 Wherever two mighty rivers come together, a human settlement is eventually established and in time evolves into a city. So it has been for Portland, which from its earliest days established a thriving maritime trade. As far back as the mid-19th century, merchant ships sailed to Liverpool, England, and to China from their moorings on the Willamette River, passing into the broad Columbia and out into the oceans of the world.

Both sides of Portland’s Willamette River saw businesses sprout up with grain terminals and shipbuilding facilities. Land on the west bank of the river became the center of industrial endeavors ranging from lumber mills to smelting plants.

Interestingly, the city had its bad old days when the name Portland was synonymous with shanghaiing, the American equivalent of the English practice of the press gang, when innocent individuals suddenly found themselves dragged off the streets and forced to become sailors – practically slaves forced to serve on board ship. Bunko Kelly and the tunnels of doom leading down to the “slave ships” on the waterfront of the old Willamette are now, fortunately, long gone.

Fast forward to the present – in the year 2000, the city of Portland realized its river frontage was not only the natural jewel in the city’s crown but an area with even more potential. Just as London celebrates its Thames, Paris has the Seine, Rome has its Tiber, and scores of cities around the world benefit from riparian tourism and the economic benefits it brings, Portland should boast about the immense benefits of the river flowing through its heart.

What eventually became known as the River Renaissance project evolved and, in May 2007, led to an exciting plan, an integral part of which was the development of the South Waterfront district. The plan called for “mixed use” urban development, high-rise apartments, office buildings, parks and greenways. The development was designed to convert some 6,500 feet of riverfront that was formerly industrial land.

A follow-up to the plan envisioned a 19-acre waterfront campus on centrally located land destined to become a new campus for the Oregon Health & Science University. Enabling the imaginative project to reach fruition was the 2004 donation of 20 acres of waterfront property to OHSU. This remarkable gift to both the university and to the City of Portland came from the Schnitzer Investment Corp.

At the time, OHSU President Joe Robertson said, “Rarely does a gift create an opportunity to physically transform an institution. The Schnitzer family’s gift was just such an opportunity.”

Not long afterwards, an anonymous donor pledged $40 million to further expand OHSU’s new campus, with special emphasis on helping to overcome the shortage of medical professionals in Oregon through training at the proposed South Waterfront campus. At the same time, it dramatically brought forward the timeline for construction of the campus.

The Schnitzer Campus Vision created in May 2007 and the subsequent Strategic Framework Plan for its implementation was the impetus for OHSU to expand its long-term facilities plan and create a transformative graduate school of health and science on the banks of the Willamette River, just a tram ride from its Marquam Hill facility.

Despite initial resistance, the Portland Tram, now an icon in 21st-century Portland, connects the OHSU campus on Marquam Hill with the riverside campus. According to OHSU, “The tram cabins travel 3,300 linear feet between the South Waterfront terminal adjacent to OHSU’s existing Center for Health & Healing, and the upper terminal at the Kohler Pavilion on OHSU’s main campus. Traveling at
22 miles per hour, the tram cabins rise 500 feet for the three-minute trip over I-5, the Lair Hill neighborhood and the Southwest Terwilliger Parkway.”

Supporters of the Schnitzer Campus hold that it is uniquely located relative to the rest of the city of Portland. Planners believe it provides a new and vibrant neighborhood on the northern part of the South Waterfront district, which will be easily accessible to downtown Portland and especially to Portland State University via TriMet. Critics are concerned whether TriMet will have enough capacity to carry the flow of students between PSU and the new campus. But the Oregon Legislature and media outlets across the state have praised the evolving collaborative project for its future impact.

“This innovative project, brimming with economic potential … should be a no-brainer,” stated an early editorial in The Oregonian. “It could be the cornerstone of a powerful new economic engine and educational dynamo for all of Oregon.”

In 2010, the OHSU Schnitzer Campus was the subject of a Blue Ribbon Panel of OHSU and community stakeholders who came together and decided that the new campus would be the ideal location to also construct educational and clinical facilities to replace Marquam Hill’s outdated School of Dentistry.

The panel determined that building a new dental school within the emerging complex in the same time frame could leverage the investments, including an additional $27 million in donations.

Much of OHSU’s future growth, particularly academic and outpatient facilities, will occur on the approximately 26 acres that the University owns along Portland’s South Waterfront District.
______________________________

On Oct. 13, 2011, three of Oregon’s top universities broke ground on a unique project that will combine the resources of these nationally respected institutions to benefit all 96,000 square miles of the state. The Oregon University System/OHSU Collaborative Life Sciences Building will place portions of Oregon Health & Science University, Oregon State University and Portland State University under one roof. The facility will extend partnerships between the universities, create new employment opportunities and expand the schools’ teaching facilities, class sizes and research activities.

The 480,000-square-foot building will include lecture halls, classrooms, labs, specialty research centers, offices and a state-of-the-art facility for the OHSU School of Dentistry. The Collaborative Life Sciences Building will foster collaboration in undergraduate and graduate education between students and instructors from multiple institutions.

The new facility is slated to open August 2013 for PSU’s Fall term with full completion by Spring 2014 for OHSU and OSU research and academic programs.

• A state-of-the-art simulation center where clinical teams (doctors, nurses, PAs, staff) train side by side

• Labs for research in basic and applied science and engineering