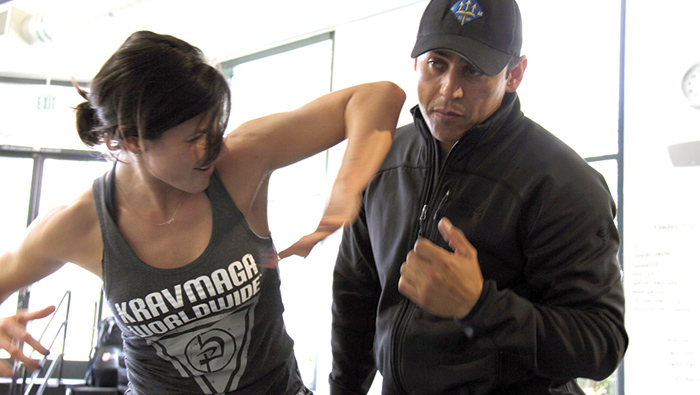 A couple of years ago, a now-retired Krav Maga instructor explained to me why the hand-to-hand combat techniques developed for the Israeli military are ideal skills for women’s self-defense.

“There are no rules when you’re fighting for your life, so we teach ‘dirty fighting,’ striking vulnerable targets such as the eyes, nose, throat, groin, and secondarily knees and shins to make the attacker fall,” Mark Blake told me.

The National Coalition Against Domestic Violence reports that one in three U.S. women have suffered physical violence from a partner, one in five women have been raped, and 1 in 7 women have been stalked and fear she or someone close to her will be harmed or killed.

Now women anywhere can learn the self-defense techniques of Krav Maga. A press release from Krav Maga Worldwide announces the first-ever online academy. Krav Maga Worldwide Academy members can learn life-saving self-defense tips anywhere they have an internet connection. The website (kravmaga.com/academy) offers links to local academies for learning in person, but if you live far away from one of the three Krav Maga centers in Oregon and Southwest Washington, you can still learn the techniques to defend yourself against larger, stronger attackers.

Krav Maga emphasizes neutralizing the threat, avoiding injury to yourself, going from defending to attacking as quickly as possible, and using any tool or object nearby as a weapon.

Founder Imi Lichtenfeld was a champion boxer and wrestler who adapted his formal skills to include street fighting as the Nazis rose to power in the 1930s bringing anti-Semitic attacks to Bratislava, Slovakia, where Lichtenfeld lived. He took those skills to pre-state Israel training local Jewish defense groups and paramilitary organizations such as Haganah. He then spent 30 years developing and teaching his close combat technique to Israel Defense Forces before retiring and sharing Krav Maga with civilians. Today, Krav Maga centers around the world teach his life-saving defense techniques.

With the new online academy, students can learn at their own pace wherever they live. Each lesson incorporates slides, printouts, forums, peer chat, bookmarks, notes and progress tracking. Classes available are designed for learning the basic techniques of Krav Maga, for teaching kids and anti-bullying, and for defenses to use against guns.

The self-defense lesson teaches the key pillars of self-protection. According to the website: “We instruct you on the most effective ways to get out of dangerous situations, such as choke holds and headlocks. … This lesson is integral to Krav Maga, as it will help to ensure your safety in a hostile situation.”

So in a center or online, self-defense options are readily accessible.