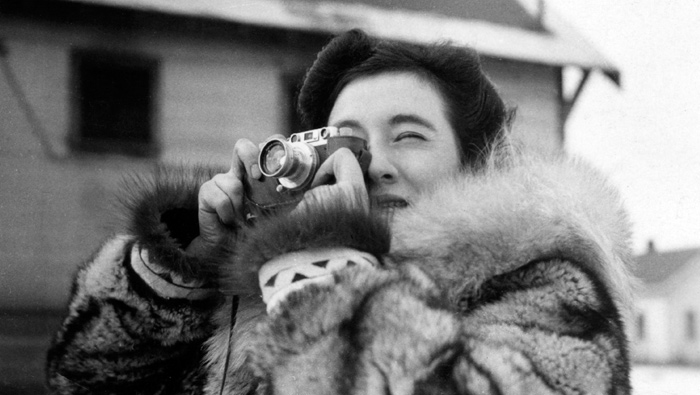 “Ruth Gruber, Photojournalist” will be on display at the Oregon Jewish Museum and Center for Holocaust Education March 13-June 13. The exhibit celebrates the remarkable life, vision and heroic tenacity of a 20th-century pioneer and trailblazer. Once the world’s youngest Ph.D., Ruth Gruber is now in her 104th year. The film “Ahead of Time: The Extraordinary Journey of Ruth Gruber” will screen at noon, March 13, before the 1-4 pm opening reception. Exhibit curator Maya Benton from the International Center for Photography and film executive producer Patti Kenner will be at the opening. The March 13 screening is free, however an RSVP is required (call 503-226-3600 or visit ojmche.org/experience/film-2016-03-13-ahead-of-time). The film will be shown throughout the exhibit once a week on Thursdays at noon.

“The Oregon Jewish Museum and Center for Holocaust Education is so pleased to be able to share the inspiring work and life story of Ruth Gruber, an extraordinary woman who is not just a photojournalist, but a social activist whose career spanned seven decades,” says OJMCHE Executive Director Judy Margles. “With her curiosity and powerful intellect, Ruth Gruber emerged in the 1940s as the eyes and conscience of the world in issues of rescue, sanctuary and liberation. Along with the exhibition, which spans 50 years of her work, OJMCHE has a robust series of programming planned throughout the run of the exhibition.”

The photographs in this exhibition stretch from her groundbreaking reportage of the Soviet Arctic in the 1930s and iconic images of Jewish refugees on the ship Exodus 1947 to her later photographs of Ethiopian Jews in the midst of civil war in the 1980s. A selection of Gruber’s vintage prints, never before exhibited, will be presented alongside contemporary prints made from her original negatives.

As the first correspondent granted permission to travel throughout the Soviet Arctic and Siberian gulag, 1934-35, Gruber documented frontier life in the Arctic and the unique role of women in the establishment of northern towns and ports. Vintage photographs represent her earliest use of the camera as a component of her reportage and trace the exploration and settlement of the northernmost frontier and the development of the Soviet Arctic.

Gruber was 30 years old and already a celebrated author, lecturer and intrepid reporter when, in 1941, U.S. Secretary of the Interior Harold L. Ickes appointed her field representative to the Alaska Territory. Gruber traveled throughout the Alaskan frontier, an enormous and largely unknown expanse, and established herself as a serious photographer. She sent reports to the Department of the Interior on Alaska’s vast natural resources, railway and air routes, opportunities for homesteading, lives and customs of the native people, and conditions and experiences of American soldiers stationed there, and suggested ways to open up the territory. “Ruth Gruber, Photojournalist” will include color prints made from her original Alaska slides, 1941-43, printed for the first time, as well as never-before-seen motion picture footage.

In 1944, Gruber was assigned a secret mission to bring nearly 1,000 Jewish refugees from Europe to the United States. Born in Brooklyn to Jewish immigrants, Gruber accepted the assignment despite the obvious danger it presented and stewarded the ship Henry Gibbins and its refugees to American shores. From that moment on, Gruber’s life and work have been inextricably bound to the lives of refugees and dedicated to rescue, sanctuary and liberation. Her tools have been her boundless tenacity, empathy, razor-sharp intellect, a Hermes typewriter and a camera.

Gruber covered the activities of the Anglo-American Committee of Inquiry on Palestine and photographed the displaced persons’ camps of Europe and the desolate internment camps of Cyprus, witnessing the desperate plight of Jewish refugees. In 1947, she documented the harrowing voyage of Exodus 1947, a ship carrying Jewish refugees attempting to break the blockade on Jewish immigration to Palestine. It was intercepted by the British near Haifa Port, and its 4,500 Jewish passengers, most of them Holocaust survivors, were forced onto three prison ships and sent back to Europe. Gruber smuggled a camera onboard one of the three prison ships, Runnymede Park, and was the only photographer to document the horrible conditions on the ship. Her photographs, taken surreptitiously in only a few short hours, were sent out to wire services throughout the world, and they radically transformed international attitudes toward the plight of Jewish refugees after the war.

In the following decades, Gruber documented successive waves of migrants from Yemen, Iraq, Romania, Morocco, Tunisia and Ethiopia, photographing small Jewish communities and remote villages in North Africa, perilous journeys of emigration and the struggle to establish new lives in Israel. Gruber is the author of 20 books and is the recipient of the International Center of Photography’s 2011 Infinity Award: Cornell Capa Lifetime Achievement Award. Her reportage and photojournalism have acted as advocate and witness for her subjects throughout her long career.

This exhibition is organized by International Center for Photography Curator Maya Benton. It was made possible by friends of Ruth Gruber and with public funds from the New York City Department of Cultural Affairs in partnership with the City Council.