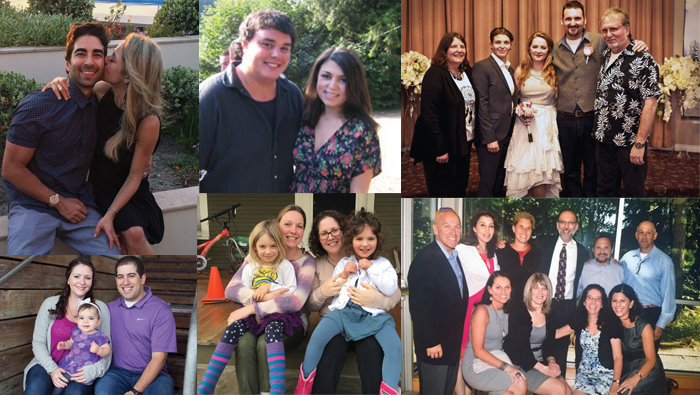 The air may still have a winter’s chill, but working parents are already thinking of summer – and how they will keep their children entertained during the months off from school.

But summer camp is about so much more than keeping children safe and happy. It is an opportunity for them to grow in so many ways – not the least of which is creating and nourishing their own friendships. The friends children make at camp often become lifetime pals, confidantes and even spouses.

What makes those ties so precious? We interviewed an assortment of adults in quest of the answer.

Overnight Jewish camps have inspired their fair share of weddings. For decades most camps had separate boys and girls sessions, so couples who found wedded bliss at camp in those years had to wait till they were on staff for their first introduction.

Linda and Larry Veltman have been married for 51 years. Both Portland natives, their paths had crossed when they were young children, but they hadn’t seen each other for years. In June 1962 they met again as teens at B’nai B’rith Camp, where Linda was a counselor for the girls’ session, and Larry spent the entire summer as a lifeguard for boys’ and girls’ sessions.

“We met again at the old JCC on Southwest 13th, waiting for the bus to take us to camp for counselor training,” says Linda. “We both had just completed our freshman year in college, and I think we both were ‘interested’ upon meeting again.

Immediately we seemed to have so much in common, laughed a lot and enjoyed our time together every day.  … When I returned to Portland after three weeks, we had already decided we would marry – and we never doubted our decision. That was 54 years ago; we have been married for 51 years, have two daughters who attended BB Camp and now have two granddaughters who have attended BB.”

A Portland native, Barb started working at camp in 1973. Randy was drawn from St. Louis to Oregon in 1975 when the director of Missouri’s Camp Sabra became director of BB Camp and recruited some of his former staff.

“I was 17 and he was 19,” says Barb. “He was funny and we both admired the camp director, Mike Lainoff. … We became great friends and wrote letters (after camp was over for the summer).We both had things going on – he was in college in Missouri, and I was living in Israel for a while.”

They developed an enduring relationship, says Barb, because of “our friendship, our love for camp and working with kids and being part of a team.”

Barb is executive assistant at BB Camp, and Randy is a mental health therapist. Both of their children went to BB Camp as campers and staff.

Hailey (Stern) and Evan Bernstein met as counselors at Camp Solomon Schechter in 1999; they have now been married for more than seven years and have a toddler named Jory.

“Each summer was a highlight of my childhood,” says Hailey. “I attended public schools growing up and had just a few Jewish friends. One of the incredibly special things about camp was being surrounded with Jews and the special relationships made.”

“We dated that summer, then took a six-year break before meeting up again in 2005,” says Evan. “We fell in love (again) on that first night and have been together ever since.”

Hailey says that in 1999, Evan was her first boyfriend.

“After camp, he served as the benchmark to which I compared every other guy I ever dated,” she says.

“Obviously, no one came close to measuring up.”

“After our success, we are DEFINITELY sending our kids to summer camp,” says Evan.

Sam and Rachel Rubens met as junior counselors at Solomon Schechter, where Rachel had been a camper for several years. Sam was going in to his junior year of high school and Rachel her senior year. They married in May 2010 and have a daughter, Sydney.

Though the couple had a lot in common and were friends with many of the same people, they lost contact after their first summer together.

“We got back together during the following summer and have been together ever since – going on 16 years, six of which married,” says Rachel, adding they will definitely send their children to Jewish camp.

Matthew and Melissa Korch met at Solomon Schechter as campers. They started dating in 2008 during their second summer as girls’ and boys’ side supervisors and married in 2014. They agree that being in a Jewish space surrounded by Jewish friends is a defining experience.

The couple believe that camp is built on the ideas of building lasting relationships and making memories within a Jewish context.

Both grew up having strong Jewish identities and value Jewish community. After years at camp together, the two feel they know they are a good team and balance each other well.

“We will absolutely send our kids to Camp Solomon Schechter,” says Melissa.

Mac Weinstock and four of his friends from Camp Solomon Schechter now all attend Colorado State University, where Mac and Jack Hirsch are both part of the Jewish fraternity AEPi. Mac and Aviva Lessnick had known each other two years before she persuaded her synagogue friends Savannah Pessin and Jack to join her at Schechter before eighth grade.

“Camp enhances our friendship in that we’ve been a part of each other’s lives for so long because of camp that it is almost implied we are all here for each other wherever we are,” says Mac. “We’ve all seen each other go through braces, boyfriends/girlfriends and adolescence, which is something shared from camp, that creates a connection (in which) no one else can say they play a part. I think we will stay in touch after college; seeing as we have such an extensive history, it would be a shame if we didn’t.”

At age 8 Irving Potter met six lifelong friends sharing a cabin at BB Camp in 1956. Most of the boys remained cabin mates for several years. After meeting at camp, they would see each other at the JCC and Hebrew school before heading off to different colleges. But they stayed connected.

“Their families became my extended family,” says Irv. “We just have always had much in common. Plus, life cycle events always brought us back together – some good, like weddings and b’nai mitzvot, some not so good, like family deaths. We’re always there to support each other.”

He still spends camp time with two of those friends at the end of every summer when they return to BB Camp for Men’s Camp.

“The core of my adult social circle is comprised of my original camp friends and their other friends and relatives – mostly friends with one or two degrees of separation at most,” he adds.

Karen Twain, who met her first camp friends at Camp Solomon Schechter at age 9, likewise has joined her friends at life cycle events from bar/bat mitzvahs to funerals.

“We have been there for each other during every life event (weddings, bar mitzvahs), battles with cancer, etcetera,” she explains. “The bottom line is we still laugh about things we did at camp all those years ago. It’s a bond you can’t break.”

Growing up in Beaverton with “hardly any” Jewish classmates, she enjoyed the Jewish community she found at Schechter. “You play, pray and sing Jewish songs together,” she says. “Even when you play basketball, they tie it back to Judaism.”

It’s a close friendship that has extended to the next generation, as well. Her children Marian, 18, and Oliver, 16, both followed their mom as Schechter campers and have formed their own close friendships.

Marian and Oliver Twain “both went up and down the I-5 corridor to all their friends b’nai mitzvot and had large contingents at theirs,” says Karen, adding they have continued the same friendships and stayed in touch as they get older.

Last year Marian spent a semester in Israel at the Alexander Muss High School. Since Solomon Schechter recruits campers and staff members from Israel, she had a group of friends to visit while she was there. She was excited to see them in person outside of camp, because they are the friends she turns to when she has a decision to make or when something is bugging her.

“Four of my closest friends from camp live in Israel,” says Marian, noting that they stay in touch almost daily with FaceTime and Snapchat. “They are my go-to people. I talk to them before school friends.”

While overnight camps are often called the source of lifelong friendships, returning to the same day camp year after year also can create close friendships, some of which also extend across generations.

Brooke Marquardt and Damaris Cowgill, both now 36, met at Willowbrook Arts Camp when they were 4 and 5, respectively. Initially they would spend the whole summer together but not see each other much during the school year; Damaris attended schools in Tualatin, and Brooke was at Catlin Gable from kindergarten through high school

Damaris says that changed “as soon as we were old enough to drive our own social engagements.” When Brooke headed to college in Boston, the two drove across country together and Damaris stayed for a week while they explored the city; Damaris calls it “one of my fondest young adult experiences.” Brooke visited Damaris in Arizona twice during college, and the two were still fast friends when both returned to the Portland area after graduation.

“We have similar interests, and Brooke brings a great balance to my personality,” says Damaris. “We were raised with a lot of the same values” on the environment, conservation, education and global issues.

Brooke says she believes friendships thrive at Willowbrook, because unlike many day camps, campers have a lot of freedom to choose how they want to spend their time. Campers can focus on pottery, stained glass, nature or a wide variety of other art forms.

“I have a handful of friends I went to high school and college with,” says Damaris, “but hands down I have more lasting friendships from my years growing up at Willowbrook than all the others combined.”

Last summer the two friends took their 4-year-old daughters to Willowbrook, and the cycle seems destined to repeat itself. Everly and Stella are already fast friends, and the girls and their mothers are looking forward to the return to Willowbrook this summer.