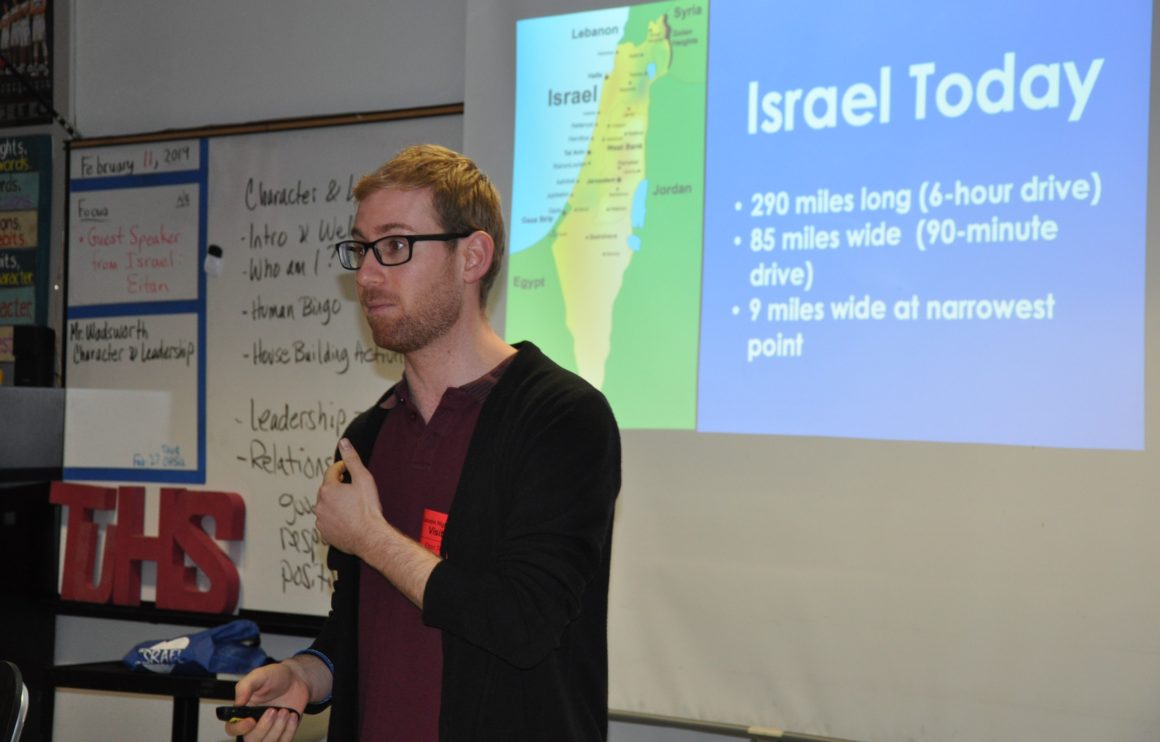 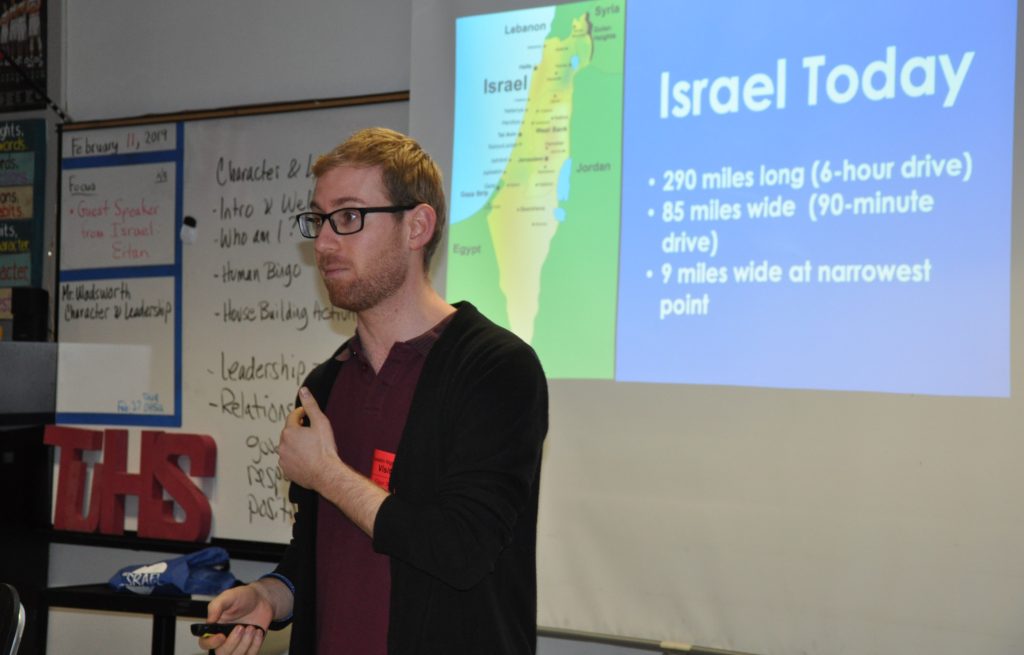 Eitan Teiger, this year’s Israeli shaliach (emissary/educator) for the Jewish Federation of Greater Portland and StandWithUs Northwest, spoke to Matt’s freshman current world studies classes at Tualatin High School Feb. 11 and 12. Matt says the program is a great fit for his classes during this quarter’s study of the modern Middle East.

Eitan spends one week a month in Oregon and is available to speak to classes and other groups about a variety of topics related to Israeli society, culture and history. For Matt’s classes, Eitan, 26, shared his personal experiences growing up in Israel, his family’s story and some history to provide context. He spoke about the people, culture and challenges of the modern nation.

He traced Israel’s 3,000-year age to Bible stories about the Jewish people thousands of years ago. Eitan explained that after the Roman Empire forced the Jews to leave their homeland came the 1,900-year Diaspora, during which Jews were often an oppressed minority culminating in the Holocaust.

“Nearly a third of my people were murdered just because they were Jewish, just because of hatred,” he said, adding society today needs to eliminate hate. “Hate is a bad thing.”

When he asked if the students had studied the Holocaust, most raised their hands, nodded or murmured “a little.”

“Israel is 70 years young because we got to return to our homeland and build the thriving democracy we know today,” said Eitan, who then asked what the word “homeland” meant to the students. One teen, who had moved from Hawaii to Oregon at age 14, said with a smile that he felt a sense of belonging in Hawaii.

“I cherish my homeland,” Eitan replied.

“Israel and the U.S. are close allies … we are very similar,” he said. “There’s a long list of values we share” – liberal economy, liberal values, cherishing democracy.

He spoke briefly of the five large Arab nations that declared war “on our tiny Jewish country” in 1948 after Israel accepted and the Palestinians rejected the United Nations plan to partition the land into two states.

Eitan shared his personal experiences during the Intifada, which resulted in more than 1,000 casualties in bombings in restaurants, buses, malls and other public places. The Intifada ended in 2005 – but not before it touched Eitan’s family. As family members returned to their homes after a bat mitzvah, Eitan’s oldest cousin was killed in a bus bombing – one of the last terror attacks of the Intifada.

As he promised at the beginning of his talk, Eitan ended on a positive note, saying that peace agreements with Egypt in 1979 and Jordan in 1994 have been followed recently by shifts in other Arab countries.

“Now we are starting to see a change from other Arab countries … that Israel has the right to stay and exist,” he said. “It’s baby steps, but in the right direction.”

When they weren’t asking or answering questions, the students sat quietly and attentively for the entire hour and a half class.

When the bell rang, some students lingered to thank Eitan.

As they left, Matt told Eitan, “If I gave the same presentation, they would fall asleep. When I bring somebody from outside, they’re more engaged. People remember personal stories. These kids will remember your story of your cousin.”

Eitan has limited availability to speak in Oregon and Southwest Washington through the end of May. Teachers can request a free visit by emailing oregon@standwithus.com or calling 206-801-0902.