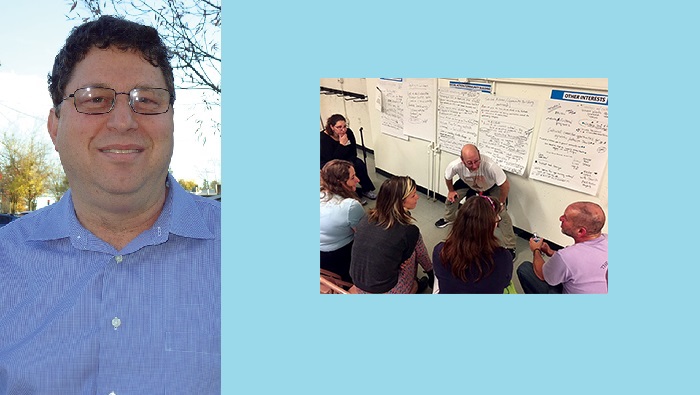 Community conversations this fall have given a broad-based coalition the focus to move forward on efforts to develop a large, multi-purpose program space on Portland’s East Side.
The Eastside Jewish Commons is distinct from the Alberta Shul project (see story). Started independently, the two projects mutually support the goal of building Jewish community infrastructure serving Portland’s East Side. EJC and Alberta Shul leaders have compiled a fact sheet (see below) to provide clarity regarding Jewish Eastside projects.
Leaders from both projects mutually endorse the success of both efforts.
The EJC Steering Committee facilitated three conversations in October and November to explore what the estimated 10,800 Jews who live east of the Willamette River (based on a 2011 demographic study) would like to see on their side of town. Planners had hoped
to attract 200 people to the conversations, but more than 300 turned out.
“The goal of the conversations is to hear what people on the East Side say they want,” says consultant Mark Sherman who is guiding the EJC Steering Committee. “We started with blank sheets of paper on the walls, and within 20 minutes they were full of ideas.” He
added that people were “excited and appreciative they were being heard and listened to.”
Area Eastsiders indicated interest in including education from early childhood to adult ed, social action, recreation and fun, and religious programming. “We saw a full spectrum of Jewish community wanting to have space where programming could occur.”
“We are not in capital campaign mode, we are in project development mode,” says Mark, a 30-year veteran of successful nonprofit capital campaigns, which began with the Japanese-American Historical Plaza build in Waterfront Park in 1989. He is also a longtime
member of Portland’s Jewish community and active at Congregation Neveh Shalom; he and his wife sent their children (now ages 21 to 38) to Portland Jewish Academy for 20 consecutive years.
Following the listening phase of EJC, the steering committee will begin conceptual planning and then identify potential spaces.
Only then will fundraising begin, says Mark. “I am confident this project can be achieved in three to five years,” he says.
“The process of doing this project will have a transformative effect by promoting collaborations and engaging new Jewish leadership
in combination with the Jewish community champions who have been leaders for many years,” says Mark. “The blend of core Jewish
community leaders and new emerging leaders is very exciting to see develop.”
Several organizations have expressed interest in the project, including PJA, Neveh Shalom, B’nai B’rith Camp, the Jewish Federation of Greater Portland, Mittleman Jewish Community Center and Congregation Shir Tikvah, which is already based on the
East Side.
Wanting to find a more permanent facility, Shir Tikvah had asked Mark about the feasibility of that. “My reply was ‘yes,’ if we truly to do it collaboratively,” he says.
In early 2017 the broad-based EJC Steering Committee was formed.
“Shir Tikvah called the question, but the response has been a collaborative process,” says Mark. “It is not under the
auspices of any one organization.”
To report progress and share information, the EJC Steering Committee created a Facebook page: facebook.com/pdxeastsidejewishcommons.

Size Approx. 1,000-sf size supports one program at a time.

Time sensitive due to availability of property for purchase.

The EJC Steering Committee is developing the project, hosting community discussions, building partnerships and collaborations.
Fundraising for property and construction will not begin until specific property plan has been developed.