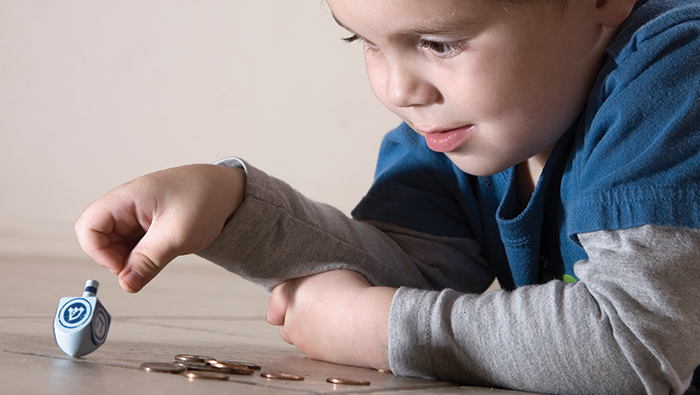 The Hebrew word for dreidel is sevivon, which means “thing that turns.” The classic dreidel is a four-sided spinning top made of wood, plastic or clay. Dreidels have Hebrew letters on all four sides. These letters are nun, gimel, hay and shin and stand for the saying “Nes gadol hayah sham, which means “A great miracle happened there,” referring to the miracle that occurred in the land of Israel. In Israel, dreidels are specifically inscribed nun, gimel, hay and pey for “Nes gadol hayah poh,” meaning “A great miracle happened here.”

The dreidel is used to play a traditional Hanukkah game in Jewish homes all over the world, but rules may vary. Here’s how to play the basic dreidel game:

1. Any number of people can play.

2. Each player begins the game with a large but equal number of small items, such as pennies, nuts, chocolate chips, raisins, etc.

3. To start, each participant antes in with one or two game pieces. Players take turns spinning the dreidel and following the rules, depending on which side is facing up when the dreidel stops spinning.

5. When players have no game pieces left, they are either “out” or may ask a fellow player for a “loan.”

6. When one person has won everything in the pot, the game is over!

A game similar to the one played with the dreidel dates back to ancient times, when Jews were not able to freely practice their religion. They would meet in secret to study the Torah, which had been outlawed. If the Greek soldiers approached, they would hide their Torah scrolls and pretend to be playing a gambling game with a spinning top to avoid attracting further attention.