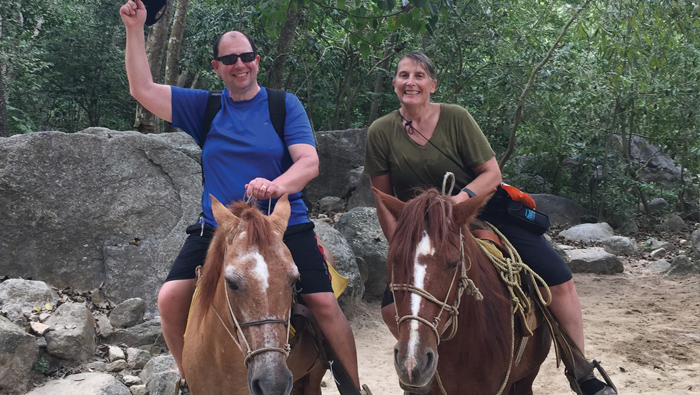 When David Fuks retired from his job as CEO at Cedar Sinai Park in October 2016, he promised his wife, Deanne, that he would just play during his first year in retirement. Chill out. Have fun. He would not, I repeat NOT, chair a committee, join a board or take on any other commitments that weren’t just for fun.

So they rented an apartment in Puerto Vallarta for a month and had some quality time together. They took the bus to charming towns. They ate interesting food and drank beer with a lime wedge sticking out of the top of the bottle. Deanne led them on adventures: deep sea fishing, snorkeling, horseback riding. He wrote short stories and a novella; she edited his work. And, of course, some of the time they were also your basic beach bums.

Tanned, rested and ready – but still in Retirement Year One – David came home to Portland and resumed the creative life he had pretty much kept on hold during the 40 years of 60-hour workweeks that characterized his career in social services and health care. He had always done some writing, but now he could focus. He wrote numerous stories and three novellas; one play was produced and one story published with, he hopes, many more to come. A stand-up and improv comic in his former life, David signed up for acting classes, and in October he appeared in the WilsonvilleSTAGE production of “The Cemetery Club.” He played Sam the kosher butcher, the romantic interest of three widows and the only man in the cast. He had a blast. Today he has a new acting coach and is excited about the stage adventures that lie ahead.

The year flew by, and when it was over, David was more than ready to resume his involvement in the community he loves and the causes he cares about. He decided, though, to choose carefully and limit himself to commitments that would allow him to continue the leisure time with his wife and the creative time with his art. Today David volunteers with the Jewish Federation of Greater Portland, serving on the legislative committee and volunteering with the Pathways mentorship program. He also sits on the board of the Oregon Jewish Museum and Center for Holocaust Education.
“It’s an exciting time for this organization, with the new building and the new direction,” David says. It also feels it is the right fit for him, as the child of Holocaust survivors. “The Hebrew International Aid Society helped my parents get to America; federation helped them get settled,” he explains. His father ended up owning a furniture store, but he did not expect David to go into business with him. “My father told me, ‘I’m doing this so you can do something for the community. Now go figure out how to do that.’ ”

David has also joined the board and the marketing committee of Project Access NOW, whose mission is to improve the health of the community by creating access to care and services for those most in need.

“PANOW represents excellence in what it does and has a moral basis in terms of advocacy,” David says.  “It’s consistent with Jewish values: tzedakah means justice and righteousness, and that’s what this is about. PANOW helps the people who are the least capable of standing up for themselves. These are not the people who will be able to create a health savings account. They are the ones who have to choose between getting health care and buying food or paying the rent.”

PANOW was created 10 years ago to connect low-income, uninsured patients who needed the care of specialists with doctors willing to donate that care. When President Obama signed the Affordable Care Act, says Executive Director Linda Nilsen, “PANOW made a conscious decision to support community-wide solutions to the new and different challenges facing the newly and under insured populations, in addition to continuing the free care for the remaining uninsured.”

The evolution continues. One primary focus in health care today, Linda says, is understanding the role played by the social determinants of health: housing, education, child care and so many more. Curing someone’s cancer doesn’t make him healthy if he must return to living on the street.

Again, a perfect fit for David. “David brings an incredible range of social service experience to our table, and he sees the intersections and opportunities for us to bring together and leverage multiple efforts, strategies and resources,” says Linda.

David believes Oregon is a state where communal cooperation is common; people are willing to work together and think creatively. “We need to advocate for things to happen and belong to organizations that can make things happen. It gets done when someone has clear values and is willing to show up and do the work.”

“What excites me about PANOW,” says David, “is that for 10 years they have helped motivate the health-care system to be responsive to low-income people to make sure that health care is easily available. As the health-care landscape has changed, they have changed with it. Given the challenges of the transitions at the national level, it’s enormously important that those of us who understand the health-care system and the social determinants of health stand up and say, ‘You can’t balance a budget on the poor and do it in good conscience.’ ”

“I can’t stand idly by. I have retired from my work but not from my values, not as a Jew, not as a member of the greater community and not as an American.”