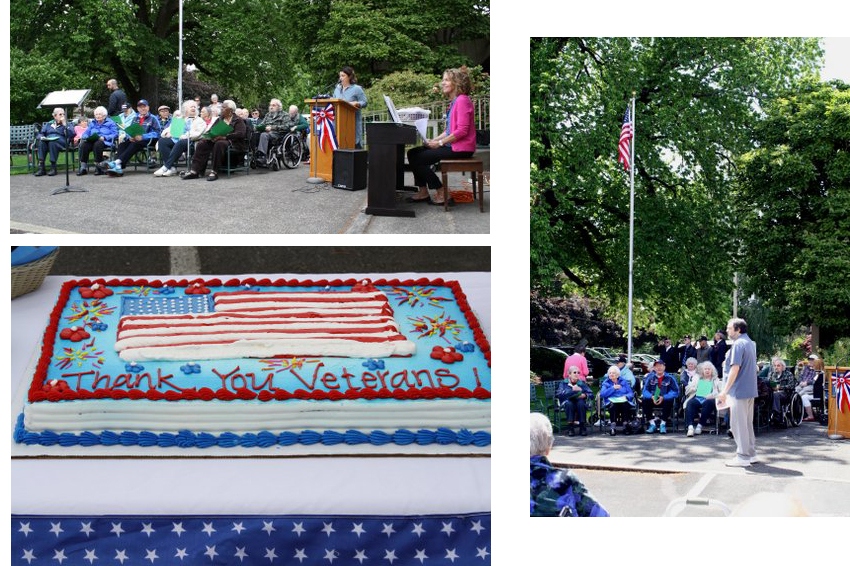 MEMORIAL DAY AT CEDAR SINAI PARK– Cedar Sinai Park held its annual Memorial Day Veterans Recognition on Tuesday, May 26th in front of the flagpole at Robison Jewish Health Center. This yearly event recognizes Robison and Rose Schnitzer Manor residents, CSP Adult Day Services participants, and Robison and Rose Schnitzer Manor staff who have served their country in the military. Sandra Simon, CSP COO, thanked those who were present for serving and for their dedication. She asked for a moment of silence to remember those who served and gave their lives for their country. She reminded the audience that Winston Churchill once said of us “The United States is like a gigantic boiler. Once the fire is lit under it, there is no limit to the power it can generate.”

The audience was led in patriotic songs by the CSP Adult Day Services choir,  “The 4 Leaf Clovers.” The color guard raised the flag followed by the Pledge of Alliance led by Robison resident, Mark Padgett. Following the ceremony, a cake decorated like an American flag was served and residents shared memories of their time in service.