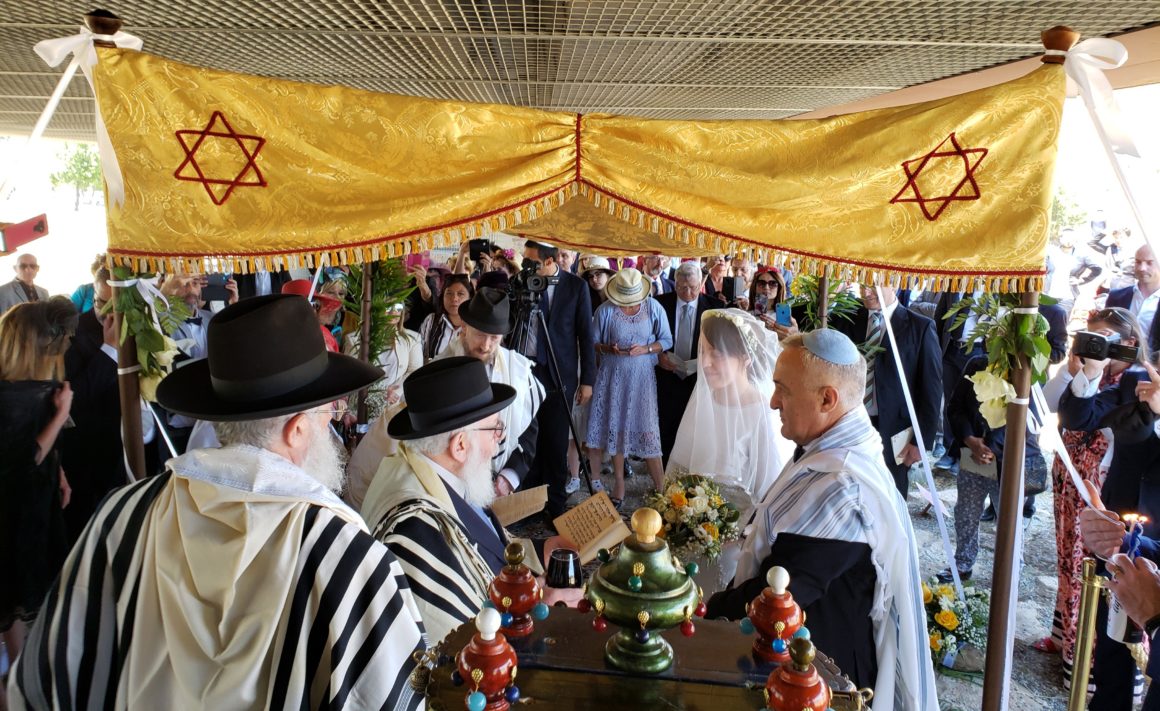 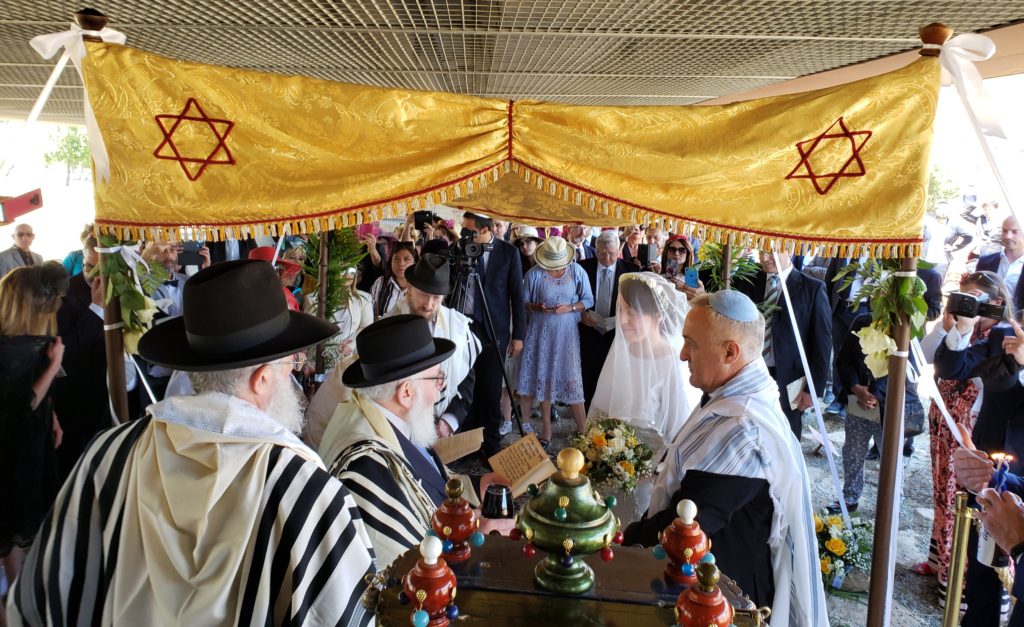 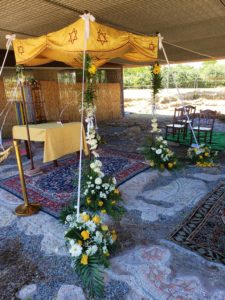 PHOTOS: Above, Drs. Roque Pugliese and Ivana Pezzoli, wed June 4 in Calabria, Italy. At right, the chuppah under which they exchanged vows sits on an ancient synagogue’s  mosaic floor with colorful tiles portraying images of a menorah, a shofar, and a lulav and etrog. Photos courtesy of Shavei Israel

For the first time in over 1,500 years, the ruins of a synagogue dating back to the 4th century in the Calabria area of southern Italy played host to a Jewish wedding this month. Dr. Roque Pugliese and Dr. Ivana Pezzoli, both of whom are Bnei Anousim (descendants of Iberian Jews forcibly converted during the 14th and 15th centuries), were married earlier this week under the Chuppah in an emotional and historic ceremony at the site of the synagogue, the second-oldest ever found in Europe.

Pugliese’s parents hid their Jewish roots while he grew up in Calabria and Argentina. Upon discovering his heritage, Pugliese decided to formally return to Judaism with assistance from the Shavei Israel organization. While Pezzoli was raised with certain Jewish traditions in her family, she was never told why. Upon researching her family history, she found that she had Jewish roots and embarked on an extensive study of Judaism for more than eight years before undergoing formal conversion. Pugliese and Pezzoli, both of whom are medics and met while working at a local hospital, are now living religiously observant Jewish lives.

The wedding took place Tuesday, June 4, in the archaeological park adjacent to the southern Italian seaside village of Bova Marina, where the remains of a synagogue were unearthed in 1983 during the construction of a road. Among the items discovered were a mosaic floor with colorful tiles portraying images of a Menorah, a shofar, and a lulav and etrog, as well as a walled niche where the Aron Kodesh, or Holy Ark which contained Torah scrolls, once stood. The ruins face directly towards Jerusalem. Pugliese and Pezzoli chose the site for their traditional Jewish wedding as a tribute to their ancestors.

“It was a remarkably moving experience to watch Roque and Ivana get married under the Chuppah amid the ruins of Bova Marina’s ancient synagogue,” said Shavei Israel Founder and Chairman Michael Freund, who assisted the couple with their return to their Jewish roots and was invited as a special guest.

“Their wedding symbolizes the eternity of the Jewish people and we hope it will inspire other descendants of Jews in southern Italy to return to their roots,” he noted, adding that, “Against all the odds, the Jewish spark in southern Italy and Sicily continues to glimmer after so many centuries. We must intensify our outreach efforts to the Bnei Anousim of southern Italy and help them to reconnect with their heritage.”

In addition to Freund, among those attending the wedding were Rabbi Giuseppe Momigliano, chief rabbi of Genova; Rabbi Elia Richetti of Milan and Naples; Rabbi Gad Fernando Piperno, the chief rabbi of Florence; and Mrs. Noemi Di Segni, president of the Union of Italian Jewish Communities. The wedding was presided over by Rabbi Umberto Piperno, former chief rabbi of Naples. Dozens of Bnei Anousim from throughout southern Italy and Sicily came to Bova Marina to participate in the festivities.

Beginning in 1391, a century before the expulsion of Spain’s Jews, widespread anti-Semitic pogroms swept across the country, leaving thousands dead and many communities devastated. In the decades that followed, there were waves of forced conversions as part of an increasingly hostile and dangerous environment for Jews. This reached a climax in 1492 when King Ferdinand and Queen Isabella gave Spain’s remaining Jews a dire choice: convert or leave forever. Large numbers chose exile. But untold numbers of forcibly converted Jews, as well as those who voluntarily underwent baptism, remained to
. Many of these Bnei Anousim (Hebrew for “offspring of those who were coerced”) bravely continued to cling to Jewish practice, covertly passing down their heritage from generation to generation.

In 1497, the King of Portugal presented the Jews living in his realm, who numbered as many as 20% of the population, with the choice: convert or die. Some chose death, but most of Portuguese Jewry was dragged to the baptismal font and compelled to accept Catholicism against their will. Many of these “New Christians,” however, did their utmost to remain loyal to their Jewish roots, passing down the faith and practices of their ancestors across the generations. And while many were made to pay a heavy price by the Inquisition for their continued fidelity to Judaism, many others somehow succeeded in preserving their Jewish identity.

About the Jewish presence in Calabria

Legend has it that the first Jews arrived in Calabria possibly as slaves after the Romans sacked Jerusalem and burned the Second Temple in the year 70 CE, but the first historical evidence points to a Jewish presence in the region in the 4th century. The 12th-century Jewish traveler Benjamin of Tudela mentions the existence of a Jewish community in Calabria. After the expulsion of Spain’s Jews in 1492, many fled east and sought refuge in Calabria. But the Inquisition followed shortly thereafter, and a series of expulsions and forced conversions took place in the region in the 16th century, culminating in 1541 with a decree that all Jews must either leave Calabria or convert to Catholicism. A number of the area’s synagogues were seized and turned into churches, but many of the forcibly converted Calabrian Jews continued to practice Judaism in secret to
. Today, Calabria is best known among Jews for its etrogim (citrons), which have been used for over 1,000 years in Europe and Israel on the holiday of Sukkot.