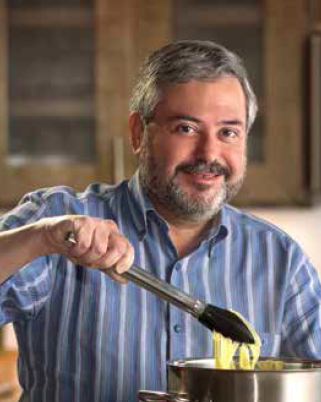 For world-renowned chef Giuliano Hazan, family and food are as inextricably linked as home and hearth. “For me, food is the fabric that holds family together.” Having been raised in a family of chefs, young Giuliano enjoyed homecooked meals almost exclusively during his childhood. As he explains in the introduction to his latest cookbook, Hazan Family Favorites: Beloved Italian Recipes, “I was very fortunate to eat well when I was growing up.”

Now that he has a family of his own, Giuliano continues this tradition. As he told a crowd gathered to hear him speak this April at Powell’s City of Books, “We always try to make eating together a priority.” In Hazan Family Favorites he remarks that “Eating individually and on the run is just not part of our family’s lifestyle. Sharing meals allows our family to reconnect and enjoy each other’s company.”

Giuliano is a chef, author, educator, Today Show regular, James Beard Award nominee, World Cookbook Award winner and one of the world’s leading authorities on Italian cooking. He and his wife, Lael Hazan, run a highly acclaimed cooking school in Northern Italy. If that weren’t enough, he is also the son of the legendary Marcella Hazan, who is credited with introducing traditional Italian cooking to the United States via her own cookbooks such as The Classic Italian Cookbook. Having her son follow in her footsteps has been a source of great joy for Marcella. As she told The New York Times, “In Giuliano, I feel I am born again.”

This focus on family has certainly rubbed off on Giuliano’s daughters, Gabriella, 12, and Michela, 7, who frequently help prepare family meals. Both girls are accomplished pasta makers, and Gabriella has displayed quite a knack for baking, for which her father is eternally grateful. While giving a cooking demonstration in Portland at Sur La Table as part of the Jewish Federation of Greater Portland’s Food for Thought Festival, Giuliano explained to the crowd, “The world is divided into cooks and bakers. I am in the reluctant baker camp.”

His “Cook. Eat. Love.” demo was part of The Food for Thought Festival, a benefit for the Oregon Food Bank. Giuliano was introduced by Michelle Gradow, who took a moment to explain the origin of Food for Thought. “The festival grew from the seed of an idea about how to engage and empower community and at the same time tackle the critical issue of hunger in Oregon.”

Giuliano made three recipes from his new cookbook: risotto with eggplant, zucchini with rice and meat, and a dessert, la sbrisolona. As he cooked, Giuliano emphasized the need for freshness and simplicity in his ingredients. He also expressed his preference for seasonally available ingredients. “When peas are in season, I’ll make a lot of dishes with peas.”

The zucchini filled with rice and meat was reminiscent of prachas or stuffed cabbage served on Rosh Hashanah. Giuliano is the son of Ladino-speaking Sephardic Jews on his father’s side (he fondly recalls Shabbat dinners at his grandmother’s) and Italian expats who settled in Syria and Egypt on his mother’s side. This rich heritage is reflected in his book’s recipes, which reflect both backgrounds. Giuliano shared his tip for prepping the zucchini. “First snip the two ends off and then use an apple corer to make the cavity for the filling. When it comes to choosing your zucchini, smaller is usually better, but they should be big enough to use the apple corer.” As he demonstrated his technique, Giuliano reminded us of an aphorism favored by his father: “Good cooking is efficient cooking.”

Giuliano has had some previous literary luck in Portland. In the early’ 90s he was offered the position of executive chef at Perlina, an Italian restaurant on NW Glisan and 14th Street. During the downtime between designing the new restaurant’s menu and the restaurant’s opening, h
e penned what was to become his first best-selling cookbook, The Classic Pasta Cookbook, which went on to sell over 500,000 copies. “I loved Portland,” Giuliano says, “but I had a hard time with the lack of sunshine.

That’s how I ended up in Florida.” In Hazan Family Favorites the author explains to the reader that, “…my goal in writing this book is to share the ways in which we sustain our family with flavor and joy.” Speaking at Powell’s, Giuliano continued to explore this theme by examining the family of man, when he asked, “Why does cooking matter?” He then explained, “It’s not just about filling a biological need to feed ourselves. Cooking and eating has united humanity ever since man first gathered around the fire to share the spoils of the hunt. Cooking is an act of love and nurturing.”