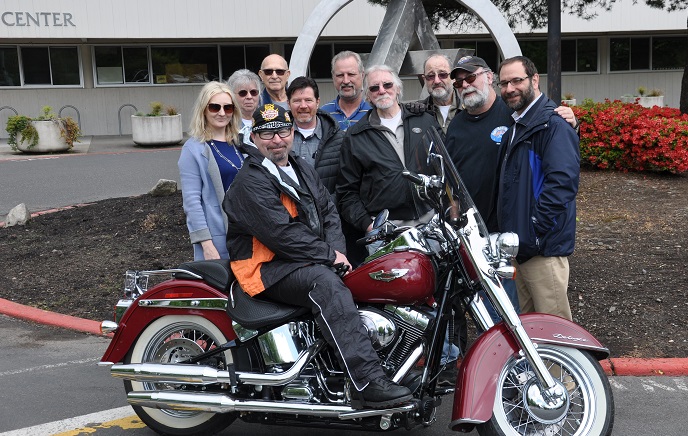 PHOTO: Portland’s Star Cruisers motorcycle club meets one Sunday a month at the Mittleman Jewish Community Center for a nosh followed by a ride, weather permitting. Photo by Deborah Moon

Portland’s Star Cruisers are joining the rolls of an international alliance of clubs such as Chai Riders, Hillel’s Angels, Yids on Bikes, Mazel Tuffs, Star of David Bikers and Shul Boys Motorcycle Club.

In late April, Portland’s Jewish motorcycle club reached the mythical 10 members to be eligible to join the 36 clubs on the international Jewish Motorcyclists Alliance website (jewishmotorcyclistsalliance.org). JMA’s site notes, “As individuals, we share the fundamental passion to ride motorcycles, but we are also drawn to our clubs by our common faith and heritage.”

Now with a minyan, the club voted on a name – Star Cruisers – and created a mission statement. Finalizing their logo, which the club expected to do by the end of May, is the final requirement to apply for membership in the group.

The club has been a long time coming. Barry NewDelman was a cofounder and president of the Chaiway Riders in Chicago when he and his wife decided to move to Oregon to be closer to their two daughters. Barry spent three weeks riding his Victory Vision from Lake Michigan to the Pacific Ocean. When he arrived, he realized, “Oregon roads are phenomenal.”

With open roads stretching across diverse geographies ranging from beaches and lush valleys to mountains and the high desert, Oregon offers a dream setting for motorcyclists.

Barry posted a flyer at the Mittleman Jewish Community Center encouraging other Jewish bikers to contact him. But response was light, and he joined another local riding club.

Two years ago (after a short detour to Salem), Frank Seiden moved to Portland from Seattle, where he had belonged to The Tribe. A mutual friend in The Tribe introduced him to Barry, and the quest to form a Jewish club gained momentum.

About eight months ago, the effort bloomed when Frank went to morning minyan at Neveh Shalom wearing his leather jacket with a logo for The Tribe. Rabbi David Kosak asked him, “What do you ride?”

That conversation spurred the rabbi to action. He shared news of the new club with Neveh Shalom members, and he went out and bought his first motorcycle in many years. The rabbi had started riding while in college and did three cross country trips before getting married. Then he made a verbal agreement with his wife, Laura, that he would only ride a motorcycle with a sidecar. With a Jewish club in the offing, he bought a 2006 Ural, the motorcycle/sidecar widely used by the Soviets as they defeated the Nazis.

Now Frank is the president of the Star Cruisers with members’ ages ranging from 40s to 80s, including one father/son duo. Several are affiliated with Neveh Shalom, but they have unaffiliated members and members from other congregations, as well. Some started riding in high school or college, others discovered motorcycles much later in life. Some of the women ride behind their husbands.

Barry, who serves as the club’s representative to JMA, didn’t start riding until he was 50.

“I needed a diversion,” he says. “I’m not a golfer, but I needed to get into the country. I’m more comfortable on a motorcycle. A friend made me take a motorcycle riding course before he would recommend a bike.”

Joel Gilbert, 77, also started riding later in life.
“I got the bug to ride when I was 60,” says Joel. “We were on a trip, and a family member gave me a ride on his Harley. The clanking of gears and wind got me excited.”

Now Joel has his own Harley. He got his son, Robb Gilbert, 48, hooked, too.

Perry Welch, 57, started riding in high school and has been riding ever since. His wife, Julie, comes along riding on the back of the bike.

Sergey Sizmin, 56, and his wife Elena, 49, have been married 32 years and moved here from the former Soviet Union in 1991. Sergey started riding a moped when he was 16. As soon as they immigrated, he bought a bike. Now he and Elena ride a 2008 Harley Road King.

Ric Zittenfield, 81, says he started riding in 1952. A friend had a Doodle Bug mini bike and “the concept of being on two wheels I didn’t have to pedal was overwhelming.”

“Many people like to ride for the freedom,” says Ric. “I ride because of a sense of adventure.”

He and his wife, Carol, have ridden more than 200,000 miles together including trips through the Alps.

While Barry and Frank still enjoy rides with other clubs, they say a Jewish motorcycle club is special.

“A Jewish club has a major difference in attitude and approach to life,” says Barry. “We have a desire to do something for the Jewish community, similar to Ride 2 Remember.”

Barry had participated in six or seven R2Rs. Each year JMA clubs vie to host the ride to benefit a local organization or program that helps recall and honor victims of the Holocaust. The first R2R raised funds for the Paper Clips Project, started by Tennessee middle school students who collected 6 million paper clips to represent the 6 million Jewish victims of Nazi Germany.

Frank has already organized club members to participate in Good Deeds Day and joined Chabad at Reed College for a project. More events, in addition to the monthly rides, are in the works.

“We don’t have exact dates, but events are coming soon,” says Frank. “We are planning, along with Rabbi Kosak, a community Blessing of the Bikes along with other wheeled transportation in late June or July, and a barbecue with Rabbi Bialo and Chabad at Reed College probably in June. We also are participating in Big Truck Day on Labor Day at the MJCC.”

For more information on the club or coming events, email Frank at f4114@aol.com.

The members of our organization share the passion of motorcycles and the love of the Jewish people. We are not promoting ourselves as a religious organization. It does not matter if you are Orthodox, Conservative, Reform or not practicing. The only preaching you may hear is safety on two wheels. We love to ride and we ride responsibly.

BENEFITING: Maltz Museum of Jewish Heritage, which has served as a resource for Holocaust education for nearly 95,000 students and educators in Ohio.