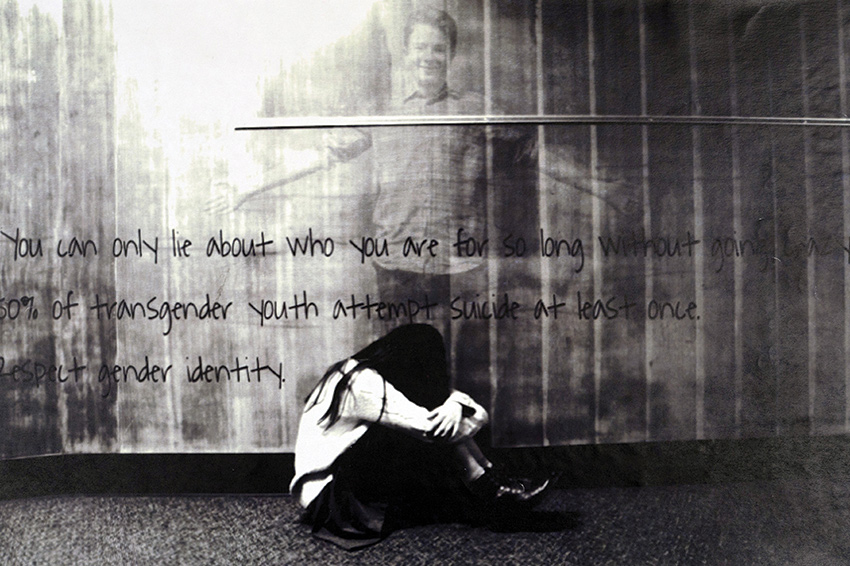 Since 1998 St. Clare School eighth-graders have studied the Holocaust in a collaborative unit designed by the Catholic school’s art teacher and language arts teacher. The unit has had an impact far beyond the school walls. The entries St. Clare students have created for the Sala Krysek Holocaust Art and Writing contests are incredibly powerful.

“They’ve won loads of times in both writing and art,” says Evelyn Banko, who has been involved in judging both contests since the mid-90s. “They do a wonderful job of teaching about the Holocaust … all the Catholic schools do. They’ve placed every year they entered.”

Funded by the Jakob Kryszek family, the contest honors Holocaust survivor Sala Kryszek, who after liberation moved to Portland, where she lived until her death in 1986. Now run by the Oregon Jewish Museum and Center for Holocaust Education, the contest encourages students “to evaluate history, foster an awareness of the Holocaust and broaden their minds in the areas of art, history, civics, sociology and literature.” Top entries are displayed at the museum so, “communities that extend beyond the classroom can celebrate” and reflect on students’ projects.

This year St. Clare eighth-grader Chip Richman won the grand prize overall for art for his depiction of a suffering transgender teen.

St. Clare art teacher Marie Acurso says she is very proud of Chip for picking such a controversial topic. “He really took a chance at standing up for something that some of his peers would not be so comfortable discussing, let alone making an art piece,” she says.

Chip was inspired to create his piece after reading about several transgender kids who committed suicide due to bullying from their families and friends.

“It made me want to bring awareness to the situation and make a statement,” says Chip. “Everyone deserves to be loved, especially by their own parents. When parents don’t support their children, there is a problem. My piece was meant to make people think about how they can make a change, simply by supporting their own family and friends through whatever situation might be happening.”

That was exactly the point of this year’s contest prompt: “Through your writing or art, show ways in which an individual, no matter what the person’s age, can make a difference in the lives of those around them.”

Marie says this year students were encouraged to “see the importance of the bystander feeling called to action against bullying.”

“Art is a powerful tool,” says Marie. “I teach that it is communication and many artists choose to use it for the good to promote discussion towards social change.”
Chip has clearly taken that lesson to heart.

Winners of both the art and writing contests receive a trip to Washington, D.C., and the U.S. Holocaust Museum accompanied by a teacher and parent. Marie says she has accompanied several past winners to the museum.

Chip is looking forward to the trip. “I am very excited to go to the Holocaust Museum in D.C.,” he says. “I have never been to D.C. before and think that it will be a great experience and I will learn a lot. I am very grateful to have this opportunity.”

Language arts teacher Marty Karlin has encouraged her students to enter the contest for many years, and several of her students have won awards. This year she required all 18 students in her advanced placement English class to submit entries; but first they read The Book Thief by Markus Zusak, Maus I and Maus II by Art Spiegelman, and Slaughterhouse Five by Kurt Vonnegut.

“What happened to the Jews, the gypsies, the homosexuals, the Catholics, at the hands of the Nazis during World War II should never happen to anyone, anywhere, anytime,” says Marty on why she teaches students about the Holocaust. “The tragedy is that it does happen, it has happened, it will happen again because of the inherent nature of humans. We remember. We teach the Holocaust in hopes that other holocausts might be thwarted.”

Foya says her teacher’s knowledge of oppressed people, including the Baha’i in Iran, helped her choose her topic for the contest. “Mrs. Karlin happened to know that the VCHS library actually has a book that includes an excerpt about my grandmother’s life,” says Foya.

“The date we started writing this project in English class happened to be the same date as the anniversary of my grandmother’s passing – March 17,” says Foya, whose middle name is Sarafros, her grandmother’s first name. “I knew that I wanted to honor her memory. Mrs. Karlin suggested that I should talk about my grandmother’s legacy and teach others her story, her life, the struggles she went through for the cause of religious freedom.”

In Loving Memory of My Grandmother
By Foya Tavangary of Valley Catholic High School
Sarafros Jiveh,
Have you ever heard of her?
She experienced severe persecution for her religious beliefs.
She spent part of her life in an Iranian prison for being Baha’i,
A religion that is not acceptable to believe in under the Islamic Regime.
Discrimination against Baha’is is rampant in Iran,
Innocent people are punished for their Faith.
My grandmother was one of those people.
Stripped of her belongings,
She had to flee the only country she had ever known.
My grandmother was an incredibly brave woman.
She taught others patience and understanding,
She remained positive in times of hardship,
She was a light in the lives in many.
How can I do anything remotely comparable to what she did?
How can I muster up the courage to make the sacrifices that she made?
Although we don’t hear her name as often as we may hear Gandhi, Anne Frank or Rosa Parks,
She made a difference in the lives of many.
She is my role model.
She is my inspiration.
Although I never got to meet her,
I strive to emulate her selfless character.
All it takes is a single spark to ignite a fire in me,
A fire that will surge through the ends of the earth and change the world.
I hope to shine as bright as my grandmother did and keep her legacy alive.
I don’t know how powerful I truly am.
I have the capability to stand up against what is unjust.
I am able to improve society if I work hard enough.
I can teach others kindness and understanding.
To be courageous enough to stand up for what they believe in.
I know that I can do it.
A part of my grandmother lives in within me,
She made a difference, so can I.