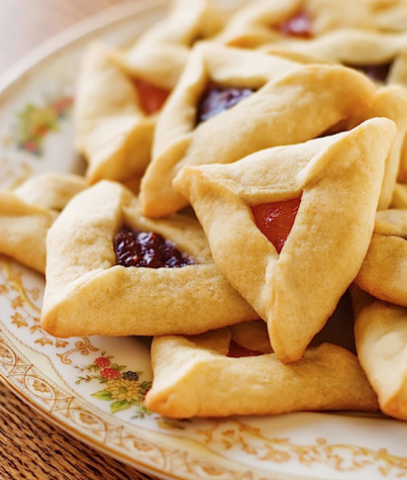 Each Jewish festival has its own kind of joy. On Purim it’s unbridled joy. “Everything is permitted on Purim,” goes the Yiddish saying.

Elaborate costumes, buffoonery, theatrical farces, parodies of texts and personages, singing, feasting and drinking even make their way into the synagogue, creating scenes that wouldn’t be countenanced at any other time of year. The hushed sanctuary fills with suppressed excitement as masquerading children and adults arrive to hear the Megillah (Scroll of Esther) chanted aloud. With noisemakers and stamping they drown out the name of evil Haman every time it is mentioned. After the service, more than one husband, having fulfilled the obligation to drink, is ushered home by his wife.

The traditional feast seems to mirror a recurrent theme in the Book of Esther. Six banquets are mentioned, beginning with King Ahasuerus’ feast “for the nations and ministers,” during which “he displayed the glorious wealth of his kingdom and the splendorous beauty of his majesty” for 180 days. It is before these guests that the king orders Queen Vashti to flaunt her beauty, clothed in a crown.

Purim in Eastern Europe was a time for fulfilling the holiday’s mitzvah of tzedakah and gifts of food. Moshe Z. of Tucson, formerly of Portland, recalls going from house to house in his native town in Czechoslovakia, delivering gifts of food according to the Purim tradition of mishloach manos (sending of portions). “It started out initially as shalach mones for the poor, and then it became a general custom among families to bring food, fruit and sweets,” he said. “We dressed up in costumes and all kinds of masks. I wondered – why the masks? There was always this tendency to give anonymously. We put on masks because you didn’t want to know who was giving, to shame the receiver. … There were all kinds of customs to lighten the danger that was always present. In Eastern Europe the Jews were cognizant of the fact that life was hanging by a thread.”

The story of Esther is believed to have taken place in Persia during the Babylonian exile at the time of Xerxes (485-465 B.C.E.). One would venture to say the joyousness of the holiday is commensurate with the story’s happy ending. Haman’s plot to annihilate the Jews is chillingly familiar. “It is the same solution proposed by a latter-day Haman whose name also began with the letter H and who was all too successful in carrying it out,” Reuven Hammer wrote in the Jerusalem Post (March 11, 2011).

The story of Esther might be viewed as turning the tables on history. Jeffrey Rubenstein, author of Purim, Liminality and Communitas, points out that reversals of power and status permeate the story, and Purim merrymaking, with its “reversals of everyday conduct,” mimics a world overturned.

For example, the king gives his signet ring to Haman, granting him authority to carry out the massacre. After Queen Esther pleads with the king to save her people, he takes the ring from Haman and gives it to Mordecai, who replaces Haman as grand vizier. The king issues the edict to kill all Jews by sending letters throughout the kingdom. When Esther intercedes, the king orders Mordecai to send letters allowing Jews to kill their attackers. Haman is hanged on the gallows he had built for Mordecai’s execution.

Mordecai’s plea to Esther is one of the most thrilling paternal speeches in literature: “Do not think that you will escape [the fate of all the Jews] by being in the king’s palace. For if you will remain silent at this time, relief and salvation will come to the Jews from another source, and you and the house of your father will be lost. And who knows if it is not for just such a time that you reached this royal position.”

You don’t have to wait until Purim (the 14th of Adar, Feb. 24) to become lighthearted. In fact, the rabbis say in the Babylonian Talmud, “When Adar enters, we increase joyfulness.” Beginning Feb. 3, the fragrance of hamantaschen (“Haman’s hats”) will waft from Congregation Shaarie Torah, which bakes 2,500 dozen of the filled pastries each year.

For details on local Purim parties, check our Happenings section page 69-70 or call your local synagogue.

Amy R. Kaufman is a Portland writer, editor and publisher.