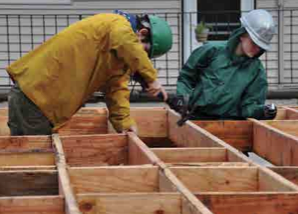 Participants in the only domestic Jewish gap year program for recent high school graduates are working to alleviate homelessness while they gain social and hands-on skills that will benefit them in college and beyond.

The eight teens in the first cohort of Tivnu: Building Justice gap year spend four days a week on a Habitat for Humanity building project and one day a week interning with a service or advocacy group. Recognizing not all Jewish teens seeking a gap year program want to go abroad, Tivnu founder and Executive Director Steve Eisenbach-Budner created this gap year program to give teens the opportunity to work, study and live together as they explore the connections between Judaism and social justice.
The teens are helping build two duplexes and one three-plex in southwest Portland as they learn construction skills from Tivnu construction trainer John Kott. The finished homes will allow seven families to become Habitat homeowners as “partner families.” Partner families are selected based on their level of need, ability to pay and willingness to partner.

“I felt burned out around junior year,” says Judah Drelich, from Washington, D.C., who will attend Case Western Reserve next fall. “I felt if I went straight to college, it would be wasted. A gap year is an opportunity to get skills. I wanted to learn construction.”That plus a program that follows the Jewish calendar and offers kosher food made Tivnu a good fit for Judah, who attended Jewish day school through 12th grade.

“I knew I didn’t want to go to college right away,” says Shoshana Sefia from Las Vegas, where she attended an Orthodox Jewish day school through eighth grade. Having helped build sets for theater in high school, she says the con- struction aspect of Tivnu appealed to her. “Working with my hands and learning new skills – I really like that.”

Nomi Small, from Boston, attended Jewish day school from kindergarten through 12th grade. Next year she plans to attend Dickenson College, but she wanted an alternative gap year first. She has enjoyed past volunteer work on community farms, so she was attracted to the hands-on aspect of Tivnu. “Every day you see progress; it’s very rewarding,” says Nomi of the construction work. Nomi also enjoys her internship at a homeless shelter for families. “I talk with the parents about trying to get into a home. These are good people, who I would never have interacted with in Boston,” she says. “Meanwhile I’m here helping build a house. … I see their needs, and I help people with similar needs.”

While the needs are similar, the internships and construction project work within a full spectrum of needs. Richard Patrych, from New York City, interacts with the homeless clients at JOIN, but he notes, “We are building houses for people with more stable lives. But at any point if something goes wrong, they could become homeless. If they get a Habitat home, they will be more stable.”

Another NYC participant, Reuben Dreiblatt, adds, “Many of the homeless have countless other issues before they can get to housing. But I enjoy working with different levels of need.” Baye Miller gets to work with people in the middle of the jour- ney out of homelessness. At her internship with REACH, she plans activities for previously homeless residents who now live in the affordable housing project, but who are not yet ready to buy a Habitat home. “From being homeless to living with a roof over your head is a big transition, and some stability is important,” says Baye, who attended a Solomon Schechter day school and a small Jewish high school in Chicago.
“I like the idea of seeing my potential to make change and see tangible proof of the change – of making a physical impact,” she says, adding she also likes to make non-tangible change.

“I wanted to do a gap year, but a lot are very expensive,” says Baye, who plans to attend the University of Vermont next fall. Learning to use tools is a skill that several of the students say will benefit them throughout life. Baye says the skills she has learned will help her be self-sufficient in making repairs when she has a home someday.
Richard, who plans to attend Boston University in the fall, says that it has also been nice to live with a group of young people from different backgrounds. “In our household, we are two modern Orthodox, four Conservative and the rest Reform. That’s really helpful. It lets you learn about what other have to say.” Social skills gained living with a group of people the same age are another benefit of the program.

“Group living is definitely an experience; we’ll all grow and mature, and it will be good for all of us,” says Baye. “Going to college I will already have a grasp on issues and situations that will come up.” Even working outside on rainy Pacific Northwest days, Baye says it’s all worthwhile. “My feet may be wet. But I know I’m doing something that will help me grow and that will benefit the people who will be living in these homes.”