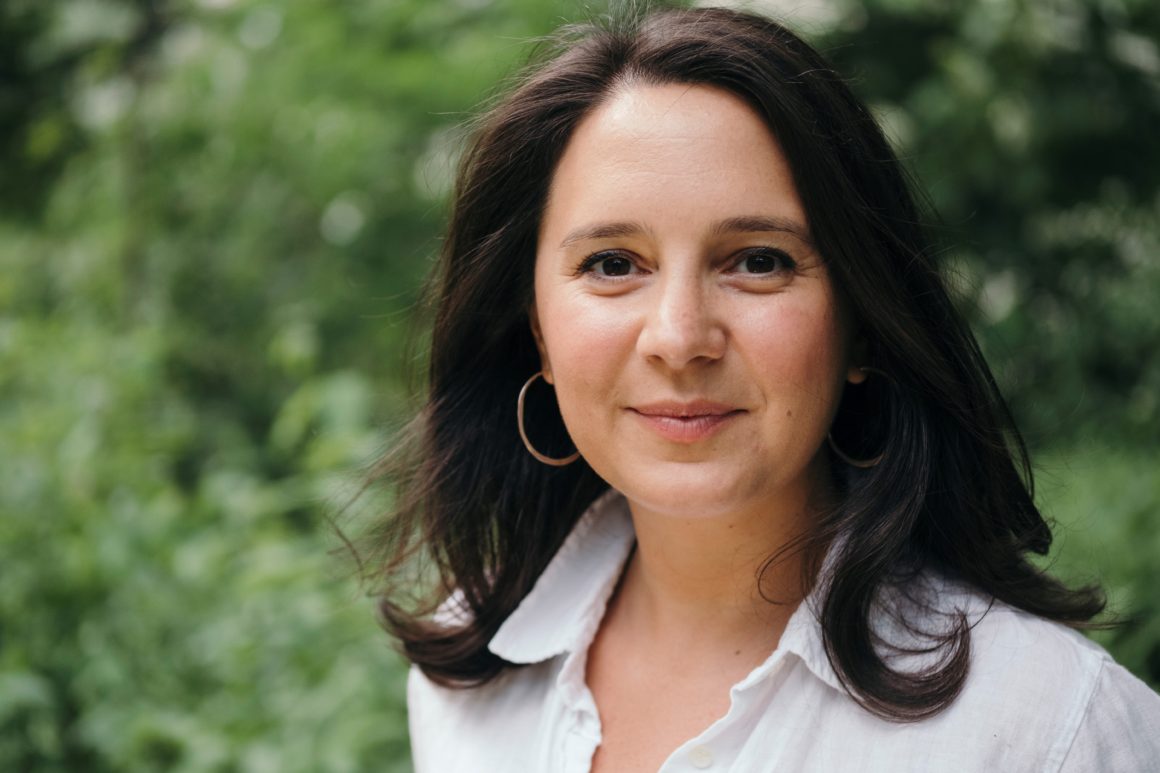 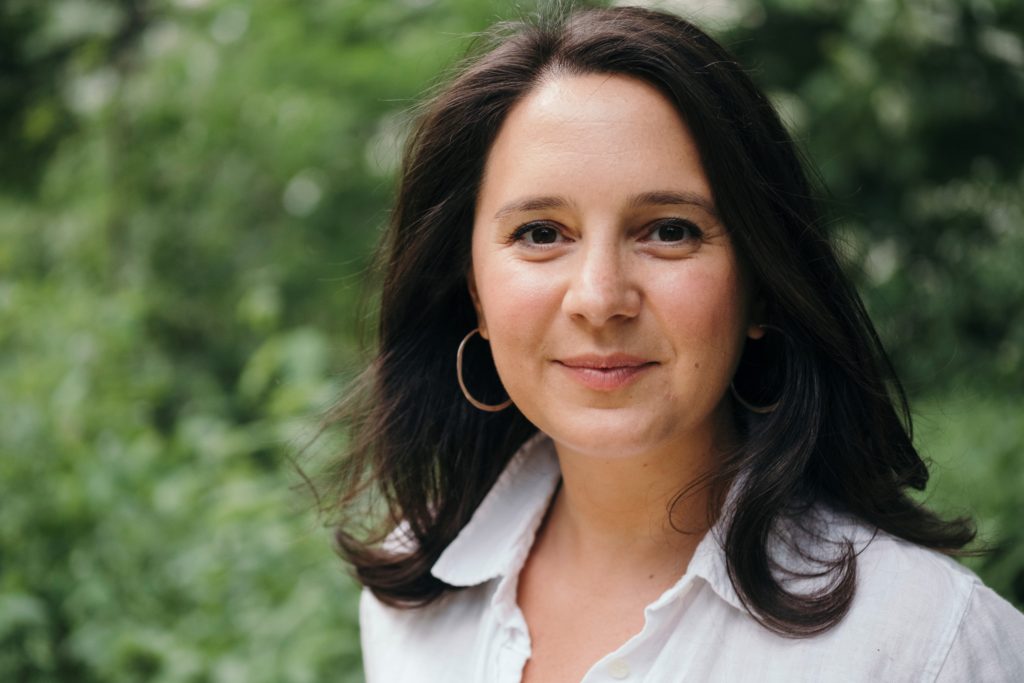 In the face of a radicalized right and left, Bari attributes her outspoken centrism to “stubbornness and the deep belief that for healthy politics, we need a robust center.”

“My fate at the moment is to get criticized from both sides – as I am daily,” she said in a telephone interview in late January. “I think there are very many more people in the center, but because things are so amped up politically, they are keeping their heads down.”

In May Bari will be in Portland (see below) to speak at the women’s Impact event. Originally scheduled for March, the event moved to avoid a conflict with a reporting assignment.

Ilene Safyan, who is on the Impact committee bringing Bari to Portland, shared a conversation she had with her 24-year-old niece in Pittsburgh that reflected that increased visibility: “She told me that Bari had just been on Joe Rogan’s podcast, ‘The Joe Rogan Experience’; it was a three-hour interview. And then she said, ‘Being interviewed on Joe Rogan’s podcast really means that Bari Weiss is truly becoming a real voice of our generation.’ ”

Between this interview in late January and the March Portland event, Bari had dozens of talks to Jewish and non-Jewish groups scheduled around the country, with some European talks in the works for late spring.

“I’ve done some speaking to Jewish groups over the years, but this year the demand is really unlike other years,” she says.

She attributes the rise to a few things: the shooting in Pittsburgh that killed 11 people in the synagogue where she grew up and where family and friends still attend; her recent writing about anti-Semitism and Israel; and her increased visibility with multiple appearances on “Real Time with Bill Maher,” “Morning Joe” and other media. 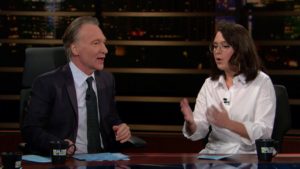 Her first appearance on Bill Maher in February 2018 unleashed a viral social media attack when she said the #MeToo movement went too far when it equated Aziz Ansari with Harvey Weinstein. In her Jan. 15, 2018, NYT column Bari shared a text message from the woman who wrote an expose of her date with Ansari: “You ignored clear nonverbal cues; you kept going with advances. You had to have noticed I was uncomfortable.” He replied with an apology. In her column, Bari wrote: “It transforms what ought to be a movement for women’s empowerment into an emblem for female helplessness.”

A Twitter storm erupted after her column and her Bill Maher appearance. But Bari thinks public opinion (and Twitter) have shifted closer to her view.

“If it (the Ansari column) was published today, it would not have gone viral,” says Bari. “Most people have woken up to the reasonableness of that position.”

Public speaking and television appearances are part of Bari’s job description at the New York Times. An op-ed and book review editor at the Wall Street Journal from 2013-17, Bari was hired by the Times to help diversify the paper’s op-eds. She says she works to “bring people into the Times who wouldn’t think of this as their natural home.”

“I’ve brought a lot of young women, libertarians and center-right writers … to bring more diversity to our op-eds,” she says.

Bari is no stranger to diverse viewpoints and political debates.

She grew up as the oldest sister in a family of four girls. “My dad is conservative, my mom liberal,” she says. “We were always debating politics in our home.”

The family also belonged to three synagogues – Reform, Conservative and Orthodox. She says that was a reflection of the beauty of Pittsburgh’s Squirrel Hill Jewish neighborhood, where people don’t stay in their own lanes.

“My sisters and I were among the youngest Torah readers at our Conservative synagogue,” she says. She became a bat mitzvah at the Tree of Life synagogue, where an active shooter massacred 11 people during Shabbat services October 27, 2018.

“The Pittsburgh the world saw after the massacre was maybe a surprise to (many in) the country, but not surprising to me – this is how the neighborhood is,” says Bari. She adds that Ahavat Israel, loving fellow Jews, is truly practiced in Squirrel Hill, which was Mr. Rogers’ real neighborhood. (His home was three blocks from Tree of Life, she wrote in one of two columns she wrote after the massacre.)

“I’m really proud to be from Pittsburgh,” she says. 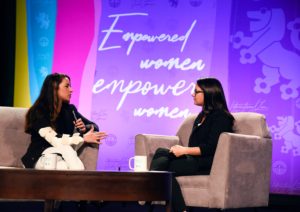 Bari Weiss interviewed 2012 gold medal- gymnast Aly Raisman, left, at International Lion of Judah Conference in Florida in January. Last year Aly rose to a different kind of prominence – this time as part of  the #MeToo movement – after she testified in the sexual abuse trial against the former U.S. Olympics gymnastics team physician Larry Nassar. At the Lion’s conference, Aly told Bari and the audience that she was shaken by the anti-Semitic attacks on social media after her testimony. “A lot of people don’t realize the pressure I feel all the time, and I’ve learned to take a step back and learn that I can’t fix everything,” she said. “I had never experienced anti-Semitism until the past year, which is really devastating.”

During her appearances since then, Bari says she has focused her comments about the shooting on the anti-Semitism that inspired the shooter.

“It seems there are two strains of anti-Semitism in the United States and across the West,” she says. “Anti-Semitism of the far right comes from blood and soil nativism and focuses on our globalist sympathies,” she says, noting that was the motivation of the Pittsburgh shooter, who railed against HIAS (Hebrew Immigrant Aid Society) helping refugees of all faiths come to America.

On the other end of the spectrum, she says, “Anti-Semitism from the left demonizes Jews for … our relationship with the Jewish state.”

At the Times, Bari’s columns about Israel have raised the ire of both ardent Zionists and Palestinian supporters – yet another area where her centrist opinions are attacked in this polarized climate.

“People take my criticism seriously because they know the criticism is coming from a place of love,” she adds.

While legitimate criticism is essential, our polarized climate has taken criticism to extremes on many topics. That has been a challenge for the media, which has been under attack from the White House for “fake news.”

“Having a strong, independent press is essential for democracy,” says Bari. “The fact that the President of the United States is demonizing that independence is really disturbing to me.”

The 2016 election offers an important lesson for journalists.

“In every newsroom, people thought Hillary Clinton would win,” says Bari. “It was a lesson for journalists. We need to get out of our political ideological bubble.”

Social media has created a third challenge for journalists in today’s divisive world.

“I see a lot of columnists become a brand unto themselves … chasing applause,” she says. “It is important to think independently and not be captured by your audience, even if that means sometimes pissing them off.”

Social media such as Twitter is deepening the divide between people. Bari reflected on that trend in an article she co-authored with her “Twitter enemy,” Eve Peyser – “Can You Like the Person You Love to Hate?”

Bari writes she cut back on her Twitter use after reading Jaron Lanier’s book Ten Arguments for Deleting Your Social Media Accounts Right Now.

“Was social media, as Mr. Lanier’s book suggested, creating a sense of intense conflict where there might be intense conversation?”

When the two women met in person at a conference, they connected, as Eve writes, “over our Jewish upbringings, being women writers and finding common ground over the absurd aspects of internet outrage culture.”

The two women also agreed on the importance of engaging with those with whom you disagree. 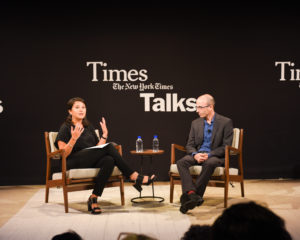 Bari engages with many people through Times Talks including philosopher Yuval Noah Harari and University of Chicago President Robert Zimmer. Times Talks are among many public events that the Times hosts in the event space of the Times Building.

Bari edited the news and politics section of the online Jewish magazine Tablet from 2011 to 2013. She continued contributing to Tablet while working as associate book review editor and opinion writer and editor at the Wall Street Journal from 2013 to 2017.

She moderated the Jewish Book Council’s “Unpacking the Book: Jewish Writers in Conversation” series from its debut Feb. 24, 2015, through season three’s first two conversations in 2017. “Unpacking the Book” brings together noted writers for conversations on a specific Jewish theme at each program. For a 2016 talk “Gefilte Fish on Fleek: The New Jewish Cuisine,” Bari interviewed Chef Rossi, Michael Solomonov, Michael W. Twitty and Niki Russ Federman.

Bari is also the winner of the Reason Foundation’s 2018 Bastiat Prize, which annually honors writing that “best demonstrates the importance of freedom with originality, wit and eloquence.”

The prize is named after Frédéric Bastiat, whose brilliant, witty essays explained, “The solution to the problems of human relationships is to be found in liberty.”

Julian Morris, a senior fellow at Reason Foundation and founder of the Bastiat Prize, said, “Bari Weiss’s brilliant, incisive journalism defends that cornerstone of individual liberty and civil society: freedom of speech. Against a maelstrom of politically motivated activists seeking to silence opponents with absurd accusations, Weiss reminds us, again and again, that ‘the battle against genuine authoritarian threats needs to be waged consistently, credibly and persuasively.’ ”

Bari graduated from Columbia University in 2007. She was a Bartley Fellow at the Wall Street Journal in 2007 and a Dorot Fellow from 2007 to 2008 in Jerusalem.

While a student at Columbia, she cofounded two student groups: The Columbia Coalition for Sudan, in response to the genocide in Darfur, and Columbians for Academic Freedom. When the latter group was founded in 2005, Bari was quoted in the Village Voice: “We are doing this because we believe in the right of all Columbia students to dissent without fear of abuse. Yes this means for conservative students as well as left-wingers, for Zionists as well as anti-Zionists … Criticism of professors does not violate their academic freedom or stifle debate. It only adds to it.”

During her junior year at Columbia, she also founded The Current, a journal of contemporary politics, culture and Jewish affairs. Of the things she launched as a student, she is proudest of The Current, which is still publishing.

“Many talented journalists have come out of there,” she says.

Bari Weiss herself was the first.

PRESENTED BY: Women’s Philanthropy of the Jewish Federation of Greater Portland

TICKETS: $54; $36 for 30 and under; includes cocktail hour and dinner
jewishportland.org/IMPACT