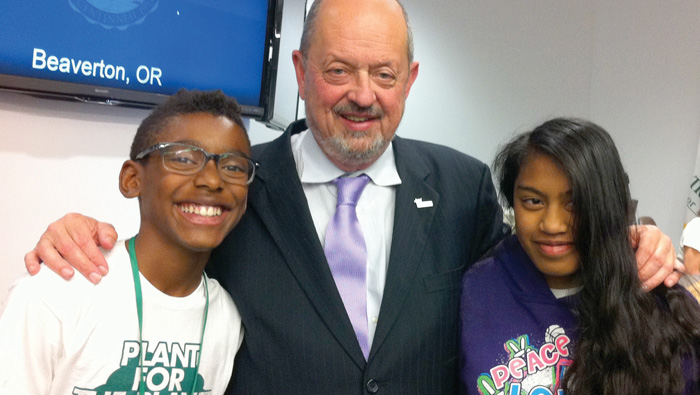 Isaac Vergun knew about climate change before meeting Bill McKibben – co-founder of 350.org and author of Oil and Honey: The Education of an Unlikely Activist – in front of 400 people in Vancouver, WA. When Isaac asked Bill, “Do you think that an 11-year-old like me with a supportive family could get a local city like Beaverton, OR, to join your divestment campaign?” Isaac’s bar mitzvah project was born. That day he took a huge step toward becoming a young leader in the struggle to stop climate change. Isaac had already surveyed and used statistics to see whether figuring out your carbon footprint might increase your knowledge of climate change – all for his 5th-grade science project. (Miko, his sister, has also been working on climate change and was featured in an OJL article in April 2014.)

Isaac, a member of Congregation P’nai Or Jewish Renewal of Portland and Kol Ami of Vancouver, celebrated his bar mitzvah this past May 8 and 9. He studied the melodies of both congregations, added clarinet and drumming, wove in prayer songs from his African-American heritage, and studied with Rabbi David Zaslow, Rabbi Elizabeth Dunsker and others. He also prepared and rehearsed with his family. Isaac’s dad, Rob, with his guitar co-led with Isaac and Rabbi David. As his mom and a maggidah, I helped him prepare and joined him on the bimah. Miko added her lovely voice and served as the gabbai for Isaac’s beautiful, awesome Shabbaton. It marked the culmination of more than two years of mitzvah work on climate change and the beginning of his work on climate recovery.

Since meeting Bill McKibben, Isaac has jumped at opportunities to protect his own – and our – future. Through 350’s Fossil Free Divestment Campaign, he began working with the city of Beaverton to fully divest from the fossil fuel and nuclear power industries. In preparation, he analyzed the current climate situation and prepared a petition as part of his environmental innovation science project. After meeting with financial advisors, gathering more than 400 signatures from as far away as the U.K. and Japan, and meeting with Beaverton’s Finance Department, on June 2 Isaac spoke before Mayor Denny Doyle and the Beaverton City Council. Isaac planned to return with more friends on Sept. 8 and will continue to help Beaverton and other local cities to act.

Isaac and Miko have been working to build their leadership skills to do this work. In March 2014, the siblings heard about an international training program, Plant for the Planet, sponsored by the United Nations Environmental Program to help children to talk about climate change with governmental officials and others. In Seattle they became Climate Justice Ambassadors and have testified at a rally at Pioneer Square, before the Oregon Transportation Commission, and in many other secular and sacred settings. At the interfaith camp Abraham’s Tent sponsored by P’nai Or, together with Michael Foster, founder of Climate Change for Families, they led the first-ever Plant for the Planet Academy in the U.S. outside of Washington state. They and their parents are working to bring academies to more locations in Oregon and beyond. They are also part of YouCAN, having gone through Youth Climate Leadership Training, and they are starting a local Earth Guardian Crew. They have felt very supported by being part of P’nai Or, especially by its book group on Naomi Klein’s book This Changes Everything: Capitalism v. the Climate. These strong spiritual and community ties have supported Isaac, Miko and me in the “Kayaktivist” training in Seattle to paddle against Shell Oil and to join the Portland protests with Greenpeace. This also nurtured Isaac as he created a powerful d’var Torah linking holiness with fairness and human and planetary rights.

And, on top of all this truly outstanding mitzvah work to celebrate, this summer they got the opportunity to join 19 other youths across the country in bringing a federal suit: Kelsey Juliana & Xiuhtezcatl Tonatiuh M., et al. v. United States & President Barack Obama, et al. The federal case addresses the rights of youth and future generations to life, liberty, property, the protection of public resources and perhaps even the pursuit of happiness – rights that depend on a healthy atmosphere and stable climate system.

Isaac’s d’var Torah has been a source of quotes as he begins speaking to a wider audience through this case, with the help of the nonprofit Our Children’s Trust (ourchildrenstrust.org).

The family’s website will have information about the lawsuit, upcoming academies and related activities for children and adults (climatechangerecovery.wordpress.com). We urge you to join us in this work with whatever time and resources you can spare.

Pam Vergun is not only a maggidah, she is also a sociologist, policy analyst and mom to Isaac and Miko.