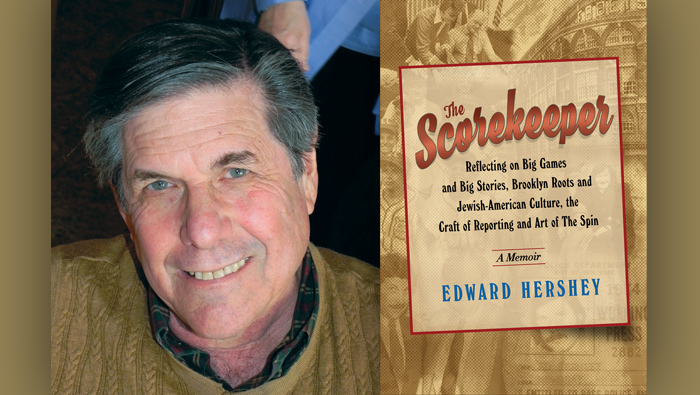 Edward Hershey will speak about “Post-War Jewish-America: Hiding in Plain Sight” at the Mittleman Jewish Community Center Oct. 19. The 6 pm talk is based on his memoir, The Scorekeeper. He will reflect on the lofty aspiration and sobering reality of Jewish-American life in the 1950s and ’60s New York neighborhood.

The program is designed to give context to a bygone era that shaped future generations. Edward will read passages and share recollections that range from humorous to sobering.

One such passage notes: “The city may have been diverse as a whole, but it was less a melting pot than a collection of ethnic neighborhoods, and few were more homogenous than those housing the two million Jews who comprised a quarter of its populace in 1950 (before many started migrating to Long Island, Westchester and New Jersey to form suburban Jewish enclaves). This Jewish-American circumspection about how – and where – to live reflected a perceived need to stick together for support and even protection.”

He goes on to reflect on how anti-Semitism gave rise to community unity and the Jewish humor of the Borscht Belt: “Banding together was one way to counter – or at least circumvent – the limitations and indignities of bias in employment, housing, education and social access. ‘They would not let us in so we bought the place’ became a laugh line in the Catskill Mountains ‘Borscht Belt’ and on the Miami Beach ‘Gold Coast’ where Jewish resorts emerged in areas previously ‘restricted’ to gentiles.”

Edward and his wife, Leah, now reside in the Mount Tabor section of Portland. A former sportswriter, reporter, elected official, university administrator, theater president and basketball announcer, Edward now operates the communications firm Edward Hershey & Associates. Leah is retired from Portland State University and has turned a prior vocation – weaving – into an avid avocation in her studio, Jersey Girl.

“I have been heartened by the response to The Scorekeeper, which is on sale here in Portland at Broadway Books and Annie Bloom’s Books,” says Edward.

Responses include Author Gabrielle Glaser’s comment, “So maybe Edward Hershey couldn’t hit a baseball, but The Scorekeeper is a home run from start to finish.” Author George Haber calls The Scorekeeper, “a fast-moving, colorful, well-written narrative that will resonate with sports fans, Brooklynites, anyone who’s been to high school or college, and all those readers who enjoy a compelling story by an extraordinary storyteller.”

The MJCC talk should inform some, evoke nostalgia in others and delight all who are proud of their Jewish-American heritage.

Tickets are $5 at oregonjcc.org/arts-culture/arts-culture-events/edward-hershey. The cost can be applied to the purchase of a book that evening.