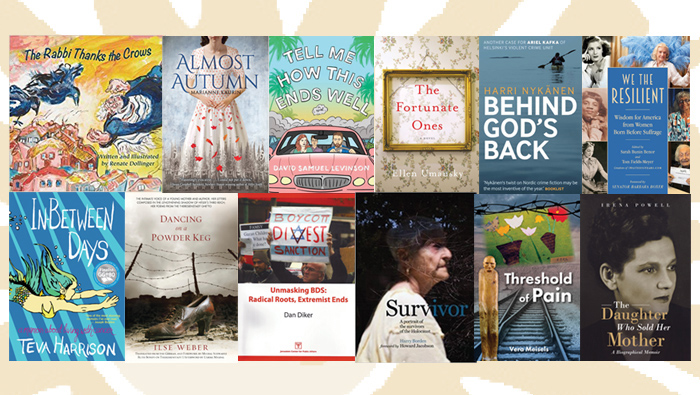 For me, a good book is an integral part of a great vacation, whether that vacation is to an exotic locale or just a short break from my normal routine. If I have a book that carries me off to new experiences, reminds me of the best and worst humans are capable of, or makes me think deeply about important issues, my time away is enriched.

Every year new books arrive on my desk from publishers, publicists and authors. Following are brief snapshots of some of those books so you can join me in this journey to escape the daily routine or gain the knowledge to navigate reality better.

The Rabbi Thanks the Crows, written and illustrated by Renate Dollinger, French Press Travel Books, paperback, $15.99.

Renate Dollinger has been painting shtetl scenes for decades. Her new children’s book uses her art to tell the story of 7-year-old Sheindel, who lives in a shtetl and can talk to the animals. One day while picking mushrooms in the forest, Sheindel falls asleep and doesn’t return home. With the help of a friendly crow and the village rabbi, Sheindel finds her way home.

This novel brings the secrecy and uncertainty in World War II Norway to life for young readers with a tale of first love. Ilse Stern, 15, is disappointed when her longtime crush Hermann fails to turn up for their first date. But Hermann is busy secretly working with the resistance to help Jews flee the country to escape the Nazis, and he finds he must lie to his parents and to Ilse, the girl he loves. Under German occupation, Jewish families such as the Sterns worry every day if they should stay or flee.

This Nordic crime novel featuring Jewish policeman Ariel Kafka came out in 2015. But as a mystery lover, I had to share this quirky tale set in Helsinki’s Jewish community with Israel connections featured prominently. Kafka knows the murder victim, having dated the Jewish businessman’s daughter 20 years earlier. A second murder victim draws the interest of both the Finnish Security Police and Mossad, pulling Kafka into a world of international intrigue and high-level corruption.

This darkly comic novel is set in 2022; anti-Semitism in the United States is soaring after Israeli refugees flood the country. America’s isolationist president refuses to come to the Jewish state’s aid, which allows it to be overrun by its Arab neighbors. Levinson uses the dysfunctional Jacobson family’s Passover gathering to explore the mechanics of generating hate, how easily xenophobia and fear can spread in a frustrated nation, and how seemingly harmless events can lead to unthinkable terror.

The Fortunate Ones, by Ellen Umansky, William Morrow/Harper Collins, hardcover, $26.99.

Two women suffer the loss of the same painting decades apart on two continents. Unable to escape the Nazi wave darkening Europe, Rose’s parents send her from Austria to England on the Kindertransport. With her family dead, Rose tries to start a new life while searching for the painting her mother had cherished. In modern Los Angeles, Lizzie carries the guilt of that same painting being stolen years earlier from her father’s home when she threw a party. The painting draws the two women together and ignites an unexpected friendship.

We the Resilient: Wisdom for America from Women Born Before Suffrage, edited by Sarah Benor and Tom Fields-Meyer, Luminare Press, paperback, $24.95.

The book stems from the website IWaited96Years.com, which made international headlines in the weeks before the election. The site featured stories of women born before women could vote who were casting ballots for Hillary Clinton. After the election, the authors spoke to the women about their disappointment and how the nation could move forward. The book features reflections from 78 women from across the country, all born before the 19th Amendment gave women the right to vote in 1920. The women’s narratives describe how the United States has survived challenges from the Great Depression to World War II and the McCarthy Era. The women also offer advice about how the country can face the future.

The Place I Live, The People I Know: Profiles from the Eastern Mediterranean, by Lori Mendel, Archway Publishing, paperback, $23.99.

Mendel taught in California and Paris before making Aliyah. Her book shares the stories of people she knows from Eilat north to the Syrian border. Jews, Arabs, Christians and Druze full of passions and contradictions pepper the pages, providing a flavor of Israel’s diversity.

In-Between Days: A Memoir about Living with Breast Cancer, by Teva Harrison, Anansi, paperback, $15.95.
Teva Harrison shares her journey of surviving breast cancer through short personal essays and comic illustrations in this graphic memoir. Diagnosed at age 37, she deftly balances the sadness of cancer and an uncertain future with everyday acts of hope and wonder.

Before the Nazi annexation of Czechoslovakia, Ilse Weber was known in the German-speaking world for her songs, theater pieces and books for children. She and her husband, Willi, were able to get their older son, Hanus, on the Kindertransport to England, where he was cared for by Ilse’s friend, Lilian Von Lowenadler. The book features letters between Ilse and Lilian from 1933 to 1944, when Ilse and her younger son were killed at Auschwitz, as well as poems hidden in Theresenstadt and recovered by Willi.

The Daughter Who Sold Her Mother: A biographical memoir, by Irena Powell, AuthorHouse, paperback, $34.79.

Powell shares the story of her mother’s life during the turbulent decades of the 20th century including the Holocaust, communism, Zionism, fascism and anti-Semitism. She weaves together fragments of her mother’s memories shared over the years. As a young Jewish mother, she fought to save the life of her newborn infant (the author) in Nazi-occupied Poland. The book explores the complex legacy of “the second generation” – those whose parents were Holocaust survivors.

Born in Czechoslovakia in 1936, Meisels’ happy childhood ended when her family fled to the forest to escape the Nazis. After two years surviving in that harsh climate, soldiers caught the family. With her mother and sister, she was sent to the Terezin ghetto. The stories constitute a dialogue between Vera the child and Vera the woman. Her stories show a longing for the pre-war period but also for wartime experiences such as her stay at the children’s home in the ghetto, where she painted and acted in the ghetto’s production of the play “Firefly.”

Survivor: A portrait of survivors of the Holocaust, by Harry Boden, Cassell Illustrated, hardcover, $39.99.

Portrait photographer Harry Boden spent five years traveling the world to photograph survivors of the Holocaust. The 110 images each face a short handwritten reflection from the subject, creating a moving portrait of those who survived the darkest era and now live with those memories. A section at the end of the book provides more information on each survivor’s experiences.

This report has been published by the Jerusalem Center for Public Affairs as the Boycott, Divest and Sanction movement and anti-Semitism have been on the rise internationally. The book addresses the perception by some in the West that BDS is a progressive, nonviolent boycott movement to establish a Palestinian state. The book’s forward describes BDS as the rejection of Zionism and discusses the BDS connection to terror-supporting groups in the United States and Europe.

'At home or on the road, a good book enhances summer' has no comments