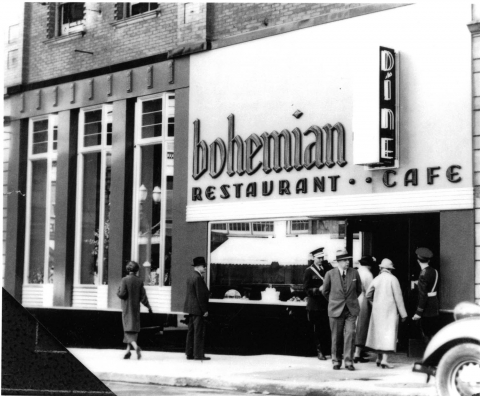 Some were kosher, some weren’t. But all made their mark on the community, and have become part of the rich tapestry that is Oregon Jewish life.

Food – and the community that it builds – is not just a part of the past. It’s very much a part of the present, as groups like Tuv Ha’Aretz look to foster sustainable agriculture, people gather at the Café at the J for coffee, pizza or the weekly kosher meat meal, or stop by Albertson’s kosher deli for takeout.

Today Jewish chefs make their mark in a range of establishments, from Paley’s Place to Mother’s Bistro and Kenny & Zuke’s. And dozens of Jewish teens converge weekly on Portland-area Starbucks for “Latte and Learning” through NCSY, while some 200 gather around lunch tables in seven area high schools for a nosh and schmoozing at Jewish Student Union clubs.

But let’s go back, at least to Old South Portland, where there are great stories and treasured memories.

Bakeries? There were three “major” ones – Mosler’s, Gordon’s and the Star Bakery, run by the Rosumny and Rotenberg families. They tried a merger at one time, but soon split up. And eventually Harry Mosler’s bakery became preeminent.

Each week, Mr. Mosler and a couple of assistants would bake about 500 loaves of rye bread – both Bohemian and Russian rye, 150 dozen bagels, 125 dozen rolls, and other rolls and breads. Customers sent cards and letters of appreciation from around the world – Japan, Holland, South America.

He mixed all his own dough, and never had a written formula. “It’s all in my head,” he said, explaining that he couldn’t pass on his recipes.

He had come to the United States at the age of 15, living in Seattle before moving to Portland in 1925. His first Portland bakery was in the old Yamhill Street Market downtown, but he soon moved to Southwest First Avenue, in the heart of Old South Portland. When he was displaced by urban renewal in the early 1960s, he reopened his bakery a few blocks away, on Southwest Fourth Avenue.

He worked at the store until a year before he died in 1969 at the age of 88. One customer spoke for many when she told a reporter, “So say already that he’s the best baker that ever lived. Say that, and you’ve said it all. He is the best.”
______________________________
Sarah Neusihin, the sister of longtime Shaarie Torah Rabbi Joseph Fain, went into the pickle business to supplement the family income. She operated out of her home, first up near Southwest 10th Avenue, and then in her longtime home – still standing – at 420 SW College St.

“Mrs. Neusihin’s Pickles” did not use vinegar in the brine. Just salt water, spices and lots of garlic.

“I took some to the fancy grocery store and said they should taste,” she told a reporter for The Oregonian in 1966. “They took all I had, showed me how to do billing, and I’m making pickles from that day.”

In the 1960s and ’70s, the pickle operation was just around the corner from where Mosler’s Bakery relocated after urban renewal. Walking on those streets was culinary bliss.

“The fragrance,” the Oregonian reporter noted, “has been known to make grown men swoon.”

Mrs. Neuishin died in 1970, and the business is no longer in family hands. The label still exists, though the recipe and the sourcing of supplies has changed.
____________________________________
Runi (Roze) Hyman, another South Portlander, began catering after her husband died in 1936. For decades, she cooked and baked in her home at 1950 SW Third Ave., sometimes catering for up to a thousand guests. Although she did most of the cooking for congregations Neveh Zedek and Ahavai Sholom (now combined as Neveh Shalom), Beth Israel and the Jewish Community Center, she called herself a “part-time” caterer.

She got her start when a woman called to ask if she could make food for a citywide “brotherhood” dinner. Her next catered dinner was for more than 600 – at an event featuring a daughter of President Franklin D. Roosevelt.

“Since then,” she told an interviewer, “I was not afraid.”

In 1961, she cooked a dinner for 400 at the Jewish Community Center – only to find out that she was the guest of honor – “in recognition for her service to humanity.”

That year, she also was the sole remaining resident on her block – and eventually moved to the East Side, as many others did, because of urban renewal. “Just give me a kitchen,” she said at the time, “and I’ll have a home.”

Mrs. Hyman died in 1972, within a day of the passing of Dora Levine, the fish market owner. Along with Mrs. Neusihin, The Oregonian noted, “these women made a noble contribution.”
___________________________
Rose Naftalin, born in what is now the Ukraine, came to Portland in 1955 by way of Chicago and Toledo, Ohio, where she and her late husband operated a small deli. Her son and daughter had moved here, and she wanted to be near them.

“Whatever we served, it had to be the best – the best!” she said.

Mrs. Naftalin sold the restaurant in 1966 – she was, after all, 68 years old then, and explained, “I worked 20 hours a day to keep up, doing all the baking and most of the cooking.” But then she wrote two cookbooks, both very well received, to share some of her famous recipes and her baking tips.

“Anybody can learn to do anything if you are really in earnest and make an honest effort,” she said in the introduction to Grandma Rose’s Book of Sinfully Delicious Cakes, Cookies, Pies, Cheese Cakes, Cake Rolls and Pastries. “There is no satisfaction,” she said, “like trying something new and having it work out wonderfully well.”

Once described as “Portland’s most famous food personality since James Beard,” Mrs. Naftalin died in 1998 at age 100. In a tribute, The Oregonian’s food writer, Barbara Durbin, called her “The Rose City’s most famous Rose.”

Shortly after Rose’s opened, another deli, more of a workaday place, opened in the heart of downtown: Dave’s Delicatessen, operated by Shirley and Abe Saltman and named for Shirley’s father.

For nearly 30 years, Dave’s was a downtown institution. Judges, lawyers, politicians, movers and shakers made it a regular lunchtime stop, and found the banter with Shirley Saltman and crew at least as much of a draw as the kosher-style soups, sandwiches and other menu items.

Originally at Southwest Third and Morrison, the deli was twice displaced by downtown development, finally finding a home in the downtown Justice Center.

Abe was a lifelong Portlander; Shirley came to Portland to visit a friend, met Abe when she was 17, and married him.

Shirley, described as “Mrs. Personality with the customers,” had a phenomenal memory, both for complicated orders and for people. “She usually knows what a customer is going to order as soon as he steps inside the door,” her husband once said.

“I like the action, I like the work,” Abe Saltman told a reporter. “The only problem is there aren’t enough hours in the day sometimes.”

But the Saltmans, Mrs. Neusihin, Mr. Mosler and countless others who gave us foods to savor and celebrate, made the most of the hours and days they had. And in doing so, they left a precious – and appetizing– legacy.