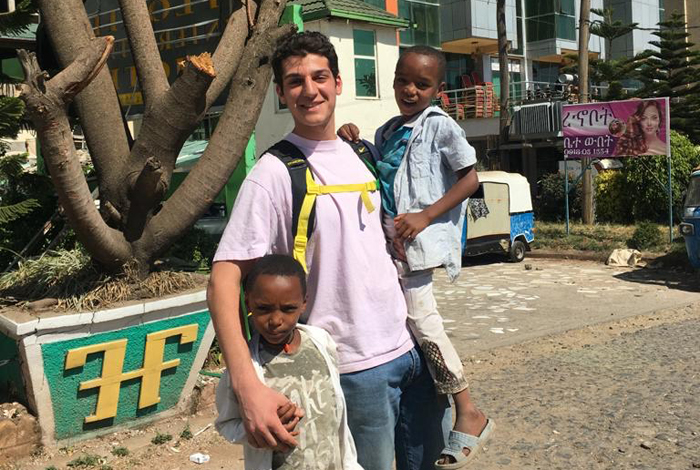 Phot: Ben Wahba with some of the friends he met while visiting Ethiopia

My name is Ben Wahba, I’m from Portland, OR and I’m living in Tel Aviv for the semester. I will be attending the University of Oregon next year, Home of the Ducks! I heard about Aardvark Israel from my parents who found it on the internet and it seemed interesting. From the one conversation I had with Shani before registering, I knew this was going to be the program of a lifetime and would make my gap year unforgettable.

I saw just how ridiculous I was being within 30 minutes of arriving on Aardvark when I spoke to Daniel Judkowicz and he welcomed me with open arms as his brother.

As a young Jewish man who naturally disconnected with the community after my bar mitzvah, it was shocking to think I could’ve ever considered another program. Coming on Aardvark, I made lifelong friends from South Africa, Brazil, Australia, etc. I’ve learned more about my friends’ backgrounds, history and slang than in any geography class. I knew I’d be learning a lot this year on Aardvark, but didn’t think that it would also include all the different cultures my friends come from.

If I had to pick one defining moment of my life on Aardvark, I would say the most fascinating thing would be going to Ethiopia with my friends. I had always been educated on the third world in an academic sense, however, I had never seen the true meaning of undeveloped and how fortunate everyone on Aardvark is compared to the Ethiopians. It was undeniably one of the saddest, yet most powerful places I have witnessed, from the children sleeping on the side of the road in the scorching sun to the outdoor synagogues made out of thin metal walls. All that mattered to the Ethiopian Jews was praying together. It didn’t matter whether they were inside a building with cover, or on the side of the road. As long as they had someone to pray with. As our tour bus drove through small townships, no matter what their opinion of us being there was, they always smiled back and said “Salaam.” The Ethiopians are a good people, to say the least.

The most surprising thing for me on Aardvark has been the coronavirus. I didn’t think that a global pandemic was going to overtake my gap year and while it has, I’ve come to see it as a blessing in disguise. Yes, we can’t go to the Moadon anymore or take Tiyuls around this beautiful country, or go to our internships; however, quarantine has allowed everyone to be closer than they are with their own siblings. Not only that, but Aardvark has now given us the opportunity to be here for another two and a half months this summer! I don’t know about anybody else, but that sounds like a much better option than being smothered by mom and annoyed by my dad at home.

Since quarantine began, my former internship at a refugee elementary school closed, which was a real bummer as I was working at a daycare for babies before Aardvark and I wanted to continue my passion of working with children in the Promised Land. Fortunately, I got a new internship during Covid-19! Charlee (the social media manager) has taken me under her wing in the world of creating content for the different social media platforms of Aardvark, like TikTok and Instagram. As a teenager who enjoys technology maybe a little too much, it’s the perfect fit!

Every other Student of the Week has ended with advice to prospective Aardvarkians, so I’ll just say this. We all have expectations in life; Lord knows I did with my gap year. All you have to remember is while you’ll be happy no matter what program you do because you’re in Israel, it seems to me that the best kind of people migrate to Aardvark and I don’t think I’ve ever come across a more beautiful family of Jewish youth than Aardvark Israel, and if you’re thinking of coming, sign up before it’s too late.

Ben Wahba is participating in the Aardvark Israel Immersion Program. Aardvark Israel’s mission is to bring together a diverse group of students from all over the world for meaningful, life-changing experiences in Israel that strengthen their Jewish identity, deepen their commitment to Israel, and foster their personal growth.

Aardvark spotlights students each week on their website aardvarkisrael.com. This is Ben’s story he shared when he was featured as “Student of the Week.”