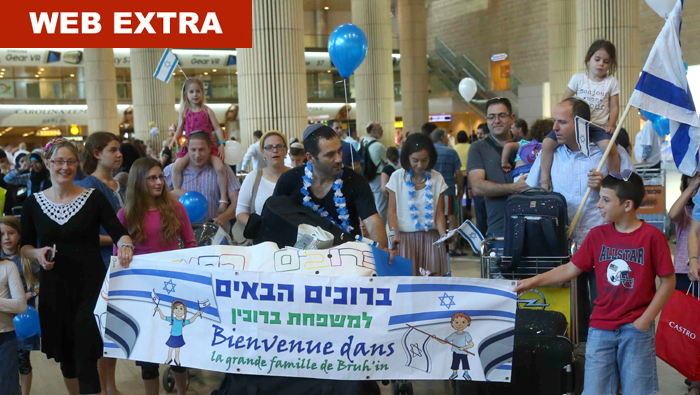 PHOTO: French Jews from Lyon, Nice, Paris, and Toulouse fleeing anti-Semitism and terror in France arrive in Israel. Photo courtesy of The Fellowship.

“The Fellowship and millions of Christian supporters of Israel stand shoulder to shoulder with the Jews of France, and we will do whatever we can to help any French Jew who seeks to build a new life in the Jewish homeland,” said Rabbi Yechiel Eckstein, The Fellowship’s president and founder.

The July 20 flight, with 147 passengers, is one of a series of missions The Fellowship has launched in France, where it has been actively working to help French Jews. Over the past three months, The Fellowship has been flooded by more than 5,100 inquiries from French Jews about immigrating to Israel (making aliyah), and following the horrific truck massacre in Nice last week, demand is only expected to rise. Several families from Nice were aboard the flight, while others came from Lyon, Paris and Toulouse. In June The Fellowship brought 82 Jews from across France to Israel, and is working on a third flight scheduled to leave in August.

The French-Jewish aliyah is part of The Fellowship’s global efforts to bring Jews experiencing economic and security threats to Israel. The Fellowship has helped more than 2,000 Jews worldwide immigrate to Israel this year from Bolivia, Brazil, France, Uruguay, Venezuela, Turkey and Ukraine.

Many of the Jews leaving France with The Fellowship say they are escaping what has become an intolerable situation for the Jewish community in general and for their families specifically; in fact, more than half the passengers are children. Many of the French Jews describe being afraid to wear kippot outdoors or to display any other visible signs of their Jewish identity, while others say they are growing increasingly concerned about radical Islamic anti-Semitism and terrorism. The Fellowship has also been funding security upgrades in French-Jewish communal institutions, including schools and synagogues in the wake of terror attacks over the past year.

For those French Jews who wish to move to Israel, The Fellowship provides information fairs and preparatory seminars in France, guidance for six months once the immigrants arrive in Israel, employment counseling, one-time financial aid or six months of rental support, tuition assistance for job training, financial assistance to help immigrants learn Hebrew, material aid such as furniture, appliances and medical treatment, and private tutors and informal education for children.

“The Jews of France know we are united with them and will do whatever is necessary to support their community at this critical time,” Eckstein said.

The Fellowship was founded in 1983 to promote better understanding and cooperation between Christians and Jews, and build broad support for Israel. Today it is one of the leading forces in helping Israel and Jews in need worldwide – and is the largest channel of Christian support for Israel.