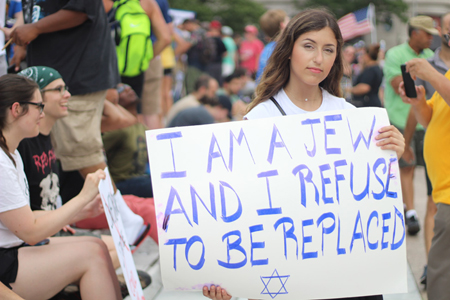 The pseudo-scientific term, coined by a German racist, obscures the rising tide of hatred. We need to use the J word.

With the disturbing increase of attacks on Jewish sites and on Jews in the US, Europe, and elsewhere, the term “anti-Semitism” is much in use. What to call the phenomenon that causes Jews to fear appearing in public in identifying garb, or sending their children out in such? Fifteen years ago, I told my then-young son, whom I normally encouraged to wear a kippa, not to think of doing so while he was in France to visit relatives, and things have worsened considerably since.

Jewish speech now also endangers, as we learned from a recent assault on Hebrew speakers in Berlin, not long after a shooting attack on a synagogue in Halle on Yom Kippur. Previously unimaginable acts of shootings and murder at synagogues in several US states and now, at a kosher deli in yet another state, have ripped away a basic sense of security that US Jews have enjoyed, at least in the post-World War II era.

What to term these incidents, and the people and forces behind them? In discussion of all this, the term “anti-Semitism” is ubiquitous but the term is terribly problematic; indeed, part of the problem, and should be dropped from use.

“Anti-Semitism” posits the falsehood that Jews are “Semites.” Jews are – Jews. The term “Semites” implies race. Jews are not a race. In fact, no one is. “Race” is a notion invented by racists who wished (and wish) to distinguish and above all, to establish hierarchies among groups, with themselves invariably in the uppermost one. While the term “race” was used, historically, for what the Greeks termed an “ethnos” and what we now call a “people” – that is, a group identifiable by such characteristics as common history, language, culture, and religion – since the invention of modern racism, the term has an entirely different meaning. It has no scientific validity. No group on earth is entirely inbred; humans are not a species like certain plants or bred animals. Jews include people from every ethnic and religious origin on the planet. What makes us a group in common, whether we are born or become Jews, is adoption of the Jewish narrative of self, and living and transmitting it in some meaningful way.

The word “Jew” took on severely negative connotations in various historical settings for reasons beyond the scope of this essay. As Jews in modern European states that were debating or offering Jews whole or partial civic equality struggled to attain those rights, many eschewed the word and adopted religiously-infused euphemisms like “Israelites,” used in France; or, in German states, “Germans of the Mosaic persuasion” (meaning, people who worship tile?). Giving “Jews” citizenship might be problematic, but the sanitized kind, called something else, were worthy at least of consideration.

It was a sorry and, as it turns out, useless evasion. Jew-hatred did not subside in modern Europe, including and even especially in rapidly modernizing, industrializing, liberal states. On the contrary, it morphed into new forms and took on new, vigorous life, something that perplexed many, Jews and non-Jews alike, who assumed that Jew-hatred derived from something Jews were doing or not doing – that is, that it was rational; and that if Jews changed their behavior, they could control and end the phenomenon. Such belief embodied an optimistic determinism that typified modernity: as people, Jews and non-Jews alike, became more enlightened, more rational, things would inevitably improve.

Theodor Herzl gave the lie to all that with his deliberately titled essay, Der Judenstaat, the translation of which is not, as is commonly conveyed, “the Jewish state,” but the in-your-face, “the Jew-State.” Herzl was saying, “We are Jews. We know it; they know it. Let’s cut the crap.”

The term “anti-Semitism” was introduced into the lexicon by a Jew-hater, Wilhelm Marr, when he founded the “League of Anti-Semites” in Germany, in 1879. Marr was a racialist. He divided groups into racial entities and, in particular, posited a deathly struggle between “Judentum” and “Deutschtum;” between an essential “Jewishness,” which posed a lethal threat to an essential “Germanness,” to Germany, and indeed, to the entire western world, and all that world represented. “Jewishness” inhered in Jews – Semites; “Germanness” in Germans.

What, Marr asked, explained not just the otherwise inexplicable survival of the Jews in their millennial exile, but their alleged triumph in modernity? The answer: semitism, a biological, inherited characteristic that no economic, linguistic, cultural, or even religious change – conversion – could erase.

Marr’s paranoid vision, with the core common to all Jew-hatred – that Jews are not weak, disadvantaged, or victimized but on the contrary, demonically strong and threatening – continues to this day, expressed in a baffling range of positions, including contradictory ones on the right and left. That individuals and groups that otherwise share nothing, indeed, are even anathema to one another, can share Jew-hatred, is nothing new, as historians of this phenomenon know, to our distress.

Marr and others across the map of Europe and Great Britain who shared his racialist, Jew-hating vision – Karl Eugen Duering, Ernest Renan, Alphonse Toussenel, Fyodor Dostoyevsky, Eduard Drumont, Karl Lueger (elected mayor of Vienna in 1897), Adolf Stoecker (Court chaplain to Kaiser Wilhelm I), Houston Stewart Chamberlain, and a long list of others – including, in the US, Henry Ford, Father Charles Coughlin, and Cordell Hull, President Roosevelt’s Secretary of State – elaborated theories of nefarious characteristics that “Semites” were alleged to bear and argued that opposing this was entirely reasonable, indeed, imperative, in self-defense. Hence, “anti-Semitism.” Unlike pre-modern, irrational, religiously based Jew-hatred, “anti-Semitism” was scientific. Hence, the “ism.

Should we perpetuate this profoundly prejudiced – racist – term in discussions of, and approaches to address, contemporary Jew-hatred?

Jew-haters hate Jews. They propagate ancient stereotypes and allegations that all, one way or the other, left or right, attribute the most malicious, malevolent, demonic evil to Jews.

“Anti-Semitism” is a euphemism, at best. A dressed-up term to avoid saying “Jews,” when this is about hatred of Jews. It is as if, back to that, there is something embarrassing or uncouth about the word, “Jew,” and this term makes the phenomenon – and Jews – fit for polite discussion. The people assailed and beaten on the streets and subways, whether in London, Paris, or Brooklyn; murdered in Toulouse and Montauban and Paris; in Buenos Aires, Pittsburgh, Poway, or Jersey City, were Jews, attacked for being Jews.

The term “anti-Semitism” has become ubiquitous, unfortunately, with people having no notion of its origins or meaning repeating it, giving it respectability and, however unwittingly for some, propagating its racist underpinnings. Ceasing to hyphenate it and capitalize the “s” is some improvement but the term should be removed from use.

Wilhelm Marr and his kind, then or now, do not deserve perpetuation and respectability. The victims deserve honesty, at least.

People who hate Jews are Jew-haters. Speech or other acts that target Jews are anti-Jewish. The phenomenon is Jew-hatred.

Shulamit S. Magnus is a professor of Jewish history and an award-winning author of books on Jewish modernity and Jewish women’s history.