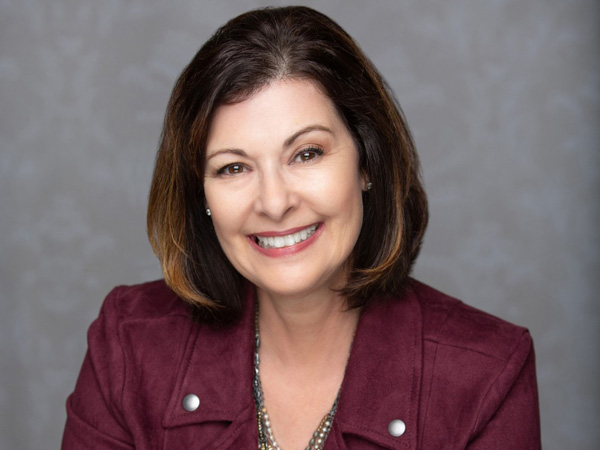 Julie Diamond, who has been at the helm of the Oregon Jewish Community Foundation as its executive director since 2010, is retiring and will begin serving the foundation as a consultant starting July 1. (Effective May 1, Chief Financial Officer Chris Vitron began serving as interim CEO and OJCF has begun the search for a new CEO.)

She has been fighting a rare cancer since 2018, and after two hospital stays earlier this year, Julie decided that it was time to put her health first.

Julie initially started at the OJCF in 2007. Prior to that, she had a professional career in marketing, public relations, communications, branding and sales. But she was also spending a good amount of her free time volunteering.

“I got up one day and thought, ‘What if I can get paid for doing these things and not have the burden of the regular job – the day job. Wouldn’t that be fabulous?’” says Julie.

She was selling advertising for the various performing arts programs in Portland – the ballet, opera and symphony – and one of the things she used to do was offer free ad space to OJCF.

“I started volunteering for OJCF and getting to know the people there, and I volunteered on the youth foundation,” says Julie. “I had been a development director at Jewish Family Service in California, and OJCF was only three people at that time. So I was the fourth hire, as the development director, to help grow the foundation, and in 2010, I became executive director.”

Julie was determined to bring to Portland what she had seen in other foundations across the country. This included more innovative programs, more leadership opportunities and more engagement with a broader audience.

“At that time, in the mid-2000s, the foundation was viewed as that place where people with a lot of money go and not everyone else,” says Julie. “I worked hard to change that perception and engage a broad audience in lots of ways to be a philanthropist.”

Part of that work was building the Oregon Jewish Community Youth Foundation. The OJCYF empowers Jewish teenagers to take action and fundraise and grant money to Jewish and secular nonprofit organizations. This program is going strong and just celebrated its 18th anniversary.

Being able to serve the most sophisticated donors was also part of the objective for the OJCF moving forward. These included gifts like artwork, business shares and real estate.

One of the most significant real estate donations was the Park Tower Apartments, gifted to OJCF by Harold, z”l,  Arlene, z”l, and Jordan Schnitzer. OJCF then sold the building to Cedar Sinai Park and created the Harold and Arlene Schnitzer Family Fund, a major philanthropic source of funding for Jewish life in Oregon.

Julie says she is most proud of spearheading the LIFE & LEGACY program for Oregon and Southwest Washington. There were earlier iterations of the program through the Jewish Federations of North America. But the current program was born from a meeting Julie had with  Gail Littman, z”l, who had created a successful LIFE & LEGACY program at San Diego’s Jewish Community Foundation.

“I practically took notes on a napkin and she said, ‘You can do this. Here are the main ingredients – get going,’” Julie remembers. “She was my inspiration and mentor. I think that program and the strength of our relationship with the  Harold Grinspoon Foundation are among the things I’m most proud of.”

Another component of the LIFE & LEGACY program is the Endowment Book of Life. The Book of Life gives a concrete way of celebrating and archiving the legacy donor’s life experiences and personal thoughts.

Pre-pandemic, there would be signing ceremonies a couple of times a year where a small group of donors and their families would gather. Each donor would then be called upon to read their page aloud, and a copy would be placed in the physical book and then they would get to take a copy home.

Those events were some of Julie’s favorite days. “It wasn’t about raising money; it wasn’t about a specific organization; it was about celebrating our community and legacy donors in their giving and their family histories. Their personal comments were so moving,” she says. “The Endowment Book of Life is intended both to honor people and inspire the next generation in a really beautiful way.”

Although Julie may not be as busy in her retirement, she has plenty of plans. This includes spending more time with her daughters Melissa, 24, and Rachael, 22, and traveling with her husband, Tom. She’s also excited to return to live theater performances and return to taking adult ballet classes. Julie says she may also do some freelance writing and would like to get more involved at her synagogue,  Congregation Neveh Shalom.

Julie shares, “It’s been very exciting and wonderful to be a part of OJCF and work with so many terrific people among leadership here, on the board and all different sides of the community.”

We at Oregon Jewish Life want to wish Julie a long and enjoyable retirement and hope that she invites us to her adult ballet class recital.