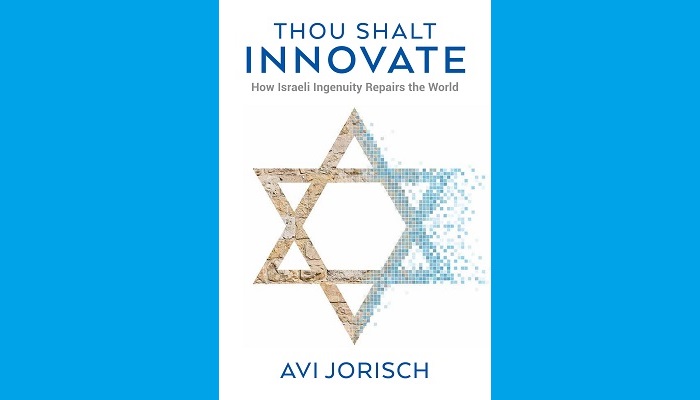 For a relatively young and small country – only 70 years old and less populated than North Carolina – with few natural resources, Israel is playing a disproportionate role in helping solve some of the world’s biggest challenges. In a new book, Avi Jorisch, Middle East expert and senior fellow at the American Foreign Policy Council, explores how the essence of Israeli culture drives innovation and improves the world as billions benefit from their developments.

Through extensive research and more than 100 interviews Jorisch explains in Thou Shalt Innovate: How Israeli Ingenuity Repairs the World (Gefen Publishing House; March 5, 2018) how and why Israelis view solving the world’s gravest problems as a historic privilege and duty.

Jorisch writes, “This is the story of how Israelis are helping to feed the hungry, cure the sick, protect the defenseless and make the desert bloom by tapping into the nation’s soul: the spirit of tikkun olam – the Jewish concept of repairing the world.”

Out of the conflict and chaos that arises from Israel’s geopolitical strife, the idea of making the world a better place drives its development. They are dedicated problem solvers at heart and are uniquely positioned to repair historic darkness with light and healing.

Israeli advances in tech, medicine, agriculture, water independence and conservation and more have had a massive global impact.

In Thou Shalt Innovate, Jorisch interviews Israeli pioneers and details their extraordinarily inspiring stories of ingenuity including:

How a quadriplegic man developed an exoskeleton walking device that allows paraplegics to walk again.

How an Israeli innovator created the uber of ambulances through a crowdsourcing smartphone application that alerts first responders to emergencies getting them there in a matter of minutes.

How a large tree out of place inspired a water expert to invent modern drip irrigation – the system that revolutionized farming with water conservation and increased crop yields. Today water poor areas around the globe use drip irrigation.

How the first solar panel water heater was invented and is now used in most homes in Israel and Palestine, increasing the country’s energy independence.

How a food storage expert developed a bag – the Grain Cocoon – that has saved villages throughout Africa from famine and is now used worldwide.

How a doctor developed one of today’s most popular drugs to treat multiple sclerosis by extracting a precious protein from discarded infant foreskin.

How with little time and even less financial support, a general with a dual PhD in electrical engineering and business dedicated his life to protect the defenseless and developed the Iron Dome Missile System – advanced radar and software that predicts an incoming rocket’s trajectory and shoots it out of the sky.

Jorisch writes, “Thou Shalt Innovate is a tale about Israelis who have chosen hope and healing over death and destruction. In a part of the world that has more than its share of darkness, these stories are a ray of light.”

Jorisch is a seasoned entrepreneur and Middle East expert. He is a senior fellow at the American Foreign Policy Council and founder of IMS, a merchant processing company that services clients nationwide. A thought leader in exploring global trends in the Arab world, radical Islam, counterterrorism and illicit finance, Jorisch previously served in the US Departments of Treasury and Defense.

“The inspiring story of its inventors and entrepreneurs and their discoveries, devices and services that have benefited the Jewish state and people around the globe has not been fully told. Nor have the cultural, religious and political roots of Israeli exceptionalism been sufficiently explored. … It is not Judaism’s prophetic tradition alone to which Jorisch attributes the amazing outpouring of innovation in Israel. He recognizes as well the lingering effects of the Talmudic tradition – which cherishes education, authorizes dissent and celebrates mastery of opposing viewpoints – on a ‘culture that encourages its citizens to challenge authority, ask the next question, and defy the obvious.’ Charity and service to the community, he notes, have been long-standing Jewish teachings. And he credits Israel’s mandatory military service, which simultaneously imposes discipline and encourages young officers with big responsibilities to improvise, and well-designed government programs that fund inventions and entrepreneurship.” ~ Peter Berkowitz, on Avi Jorisch and Thou Shalt Innovate in Real Clear Politics

“Thou Shalt Innovate is full of inspiring stories revealing the ancient roots of Israel’s innovative spirit, and how that drive to improve the world continues to play out on a global stage. It’s a great read for entrepreneurs, business leaders, and anyone who wants to understand where innovation comes from and how it’s done.” ~ Dan Senor and Saul Singer, co-authors, Start-Up Nation: The Story of Israel’s Economic Miracle.