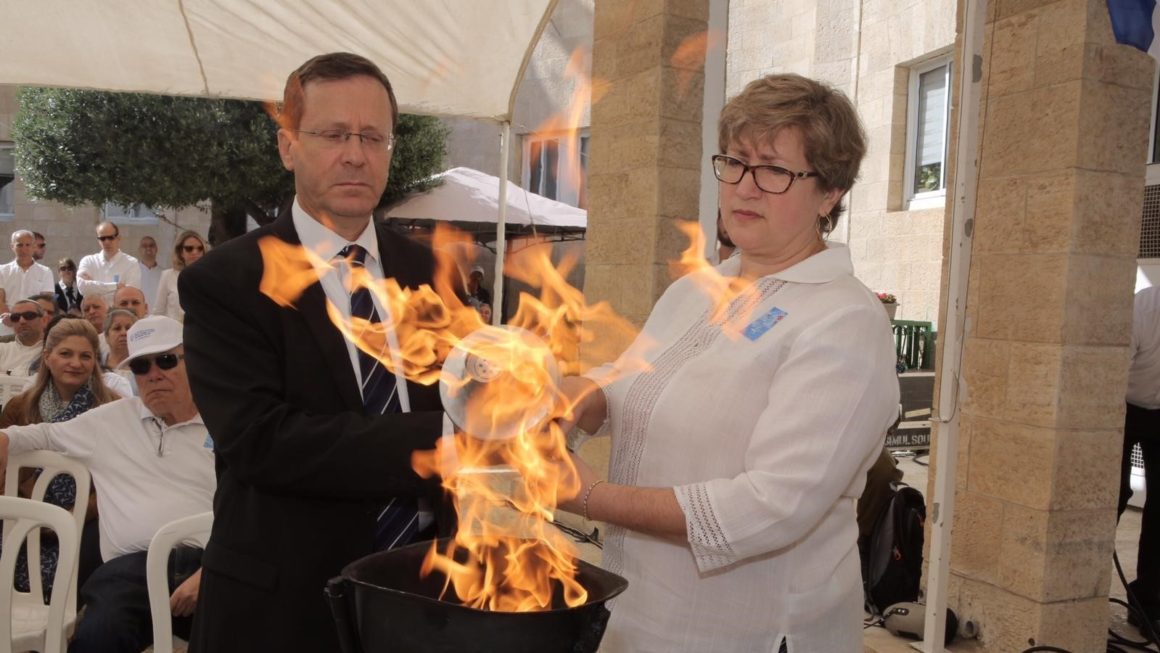 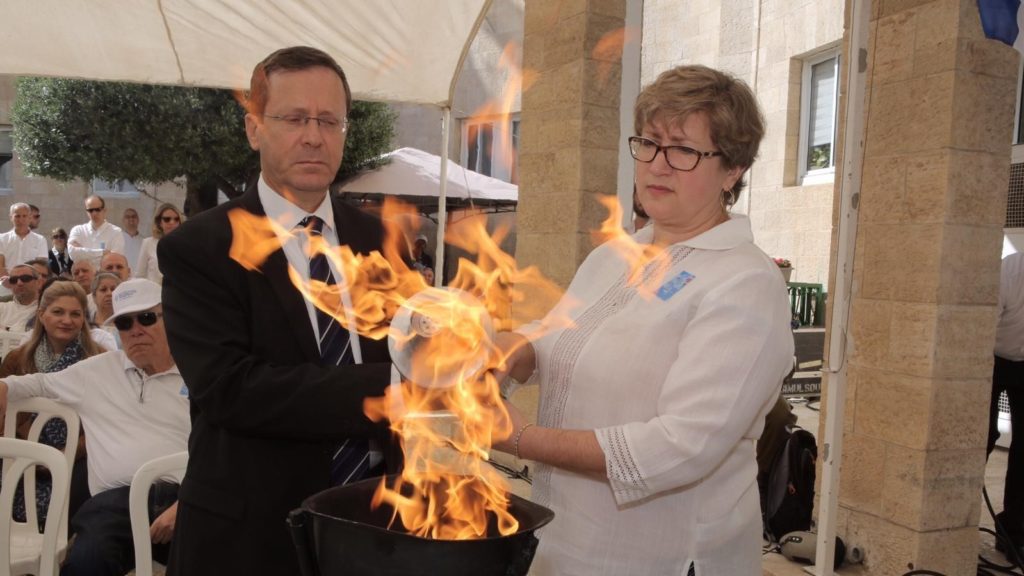 Photo: Marnie Fienberg, the daughter-in-law of Joyce Fienberg, who was murdered in the Pittsburgh synagogue attack, lights a memorial torch together with Chairman of The Jewish Agency for Israel Isaac Herzog (Credit: Noam Sharon)

On Israel’s Remembrance Day for fallen soldiers and victims of terror, The Jewish Agency for Israel paid special tribute to the victims of the synagogue shootings in Pittsburgh and Poway

Tributes to the 12 Jews killed in the synagogue shootings of October 2018 in Pittsburgh and April 2019 in the San Diego-area city of Poway took center stage May 8 during The Jewish Agency for Israel’s memorial service for Yom Hazikaron, Israel’s annual day of remembrance for fallen soldiers and victims of terror attacks.

The special guests from Pittsburgh at Thursday morning’s ceremony at the Jewish Agency Courtyard in Jerusalem included Jewish Federation of Greater Pittsburgh President and CEO Jeff Finkelstein; and Marnie Fienberg, the daughter-in-law of Joyce Fienberg, who was murdered in the Pittsburgh synagogue attack. Fienberg lit a memorial torch together with Chairman of The Jewish Agency for Israel Isaac Herzog, who personally invited her to attend the service.

“On this day, the Jews of the Diaspora unite in grief with all the residents of the State of Israel. And here, too, in Israel, we are united in grief with the Jewish families in the Diaspora, those who lost loved ones in terrorist acts and those whose children chose to wear their olive uniforms and gave their lives, protecting Israel,” said Herzog at the ceremony. “Zionism and our shared fate have been sanctified with their blood. Lone soldiers, Jewish volunteers from all over the world, and new immigrants who sacrificed their lives and fought shoulder to shoulder since the beginning of Israel’s independence. Their beating heart is in each and every one of us, whether a citizen of the state or a Jew in the Diaspora.”

According to The Jewish Agency, more than 200 Jews have been murdered in anti-Semitic incidents and terrorist attacks across the Diaspora since the State of Israel achieved independence in 1948, with the 11 victims of the shooting at Pittsburgh’s Tree of Life Synagogue and the victim of the shooting at Chabad of Poway joining that list this year.

“The anti-Semites don’t care about our labels {Reconstructionist, Chabad, Conservative}, to them we’re all Jews,” said Finkelstein. “And to all of us, the work we do with the Jewish Agency and Federations has to be focused on building Jewish unity, because together we can defeat evil. Am Yisrael Chai.”

The Jewish Agency broadcast Thursday’s memorial service live on Facebook both in Hebrew and English, making it possible for Diaspora Jews to take part in the ceremony from afar. Other dignitaries in attendance included Aryeh Lightstone, Senior Advisor to U.S. Ambassador to Israel, David Friedman, Chairman of the World Zionist Organization Avraham Duvdevani, CEO of the Jewish Federations of North America Rebecca Caspi, CEO of Jewish Federations of Canada-UIA Yossi Tanuri, Director of Legacy and Endowments at Keren Hayesod Dani Viterbo, and Vice Chair of the KKL-JNF Fund Executive Yair Lootsteen.

“During this tragedy, during these awful times, something amazing has happened. At our lowest point, we weren’t alone. There was support, love, and strength from all over the world, not just from our friends, from Jews everywhere…we felt that love, and love is what gets us through every single day,” said Fienberg. “We are inspired by you Israelis – proud Israeli soldiers and citizens. You never back away from a fight and we aren’t going to either. We are stronger together, in Pittsburgh, in the United States, and here in Israel.”