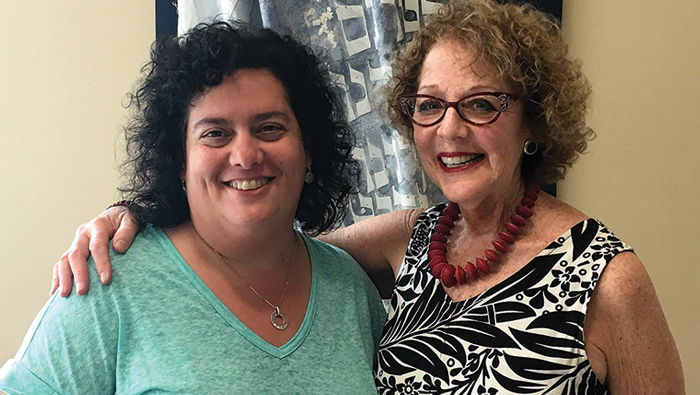 This spring, Congregation Neveh Shalom members Dale Oller and Sarah Coblens launched Yad b’Yad (Hand in Hand) to support mourners through the difficult process of grieving and adjustment during the first year after the loss of a close relative. Coblens believes Yad b’Yad is the only such initiative in the Northwest Jewish community.

As a part of the effort, Oller, a psychiatrist by profession, has authored a series of four booklets that offer advice to mourners and provide an introduction to Jewish rituals surrounding mourning for those who may not be fully acquainted with the details.

Oller and Coblens met at morning minyan shortly after each of their husbands had passed away. They each felt they had found a kindred spirit and began to discuss what more could be done to help others who had lost someone close. After brainstorming along with Rabbi Eve Posen and CNS Education Administrator JoAnn Bezodis, they decided to organize a band of volunteers who themselves had lost loved ones, and who would pair up with new mourners.

Yad b’Yad provides sustained, one-to-one contact beginning on the first day and continuing throughout the first year after a loss. After learning that someone in the CNS community has newly become a mourner, a Yad b’Yad contact reaches out as soon as possible and brings a challah along with a bottle of juice or wine the first Shabbat following the death. The representative keeps in touch throughout the year, preparing the mourner and offering assistance, especially at the various milestones along the way – the end of sheloshim (the first 30 days after the death), the quarterly yizkor (memorial) services, the unveiling and the first yahrzeit (anniversary of death). The nearly 20 volunteers meet monthly to support each other and discuss ideas for improving the process. They have found that the act of comforting others has helped them to further process their own grief, as well.

Oller began writing her series of booklets as a way to help process the sadness and fear of being a widow.  In a touching, empathetic fashion, she interweaves a discussion of the many variations of current Jewish practice with the story of her own experience mourning her husband, Earl.

As she writes in her introduction, “Judaism can offer a valuable road map to help you transition through your grief. Contained in this booklet are some suggestions and examples of ways to do this. Jewish tradition is committed to life and joy. It helps us acknowledge the sadness of loss, and also provides us with rituals to mark the milestones that help us to move through the mourning process. But Judaism also mandates that in this period, we move toward life and hope.”

The first booklet discusses the “The Three S’s: Shomrim, Shivah and Sheloshim;” the second addresses “The Grieving Process;” the third reflects on “The Middle Months of Mourning;” and the fourth covers “The Unveiling and Yahrzeit.”

Coblens, who lost her husband Ross to a brain tumor (and her mother to Alzheimer’s during the same period), also brings a great deal of experience and wisdom to the project. She first became a mourner at age 2 after her father passed away. Even though she was so young, her mother impressed on her the importance of attending yizkor. She feels that her life experiences have helped her to develop compassion. Coblens went on to a career as a public relations specialist in the medical field and now serves the National Brain Tumor Society as an advocate for families dealing with this deadly disease. Recently, she attended their annual “Head to the Hill” event in Washington, D.C., and met with congressional representatives and staffers to try to convince them to provide additional funding to battle the condition.

Oller and Coblens hope to continue building Yad b’Yad and look forward to offering expanded resources to mourners in the years ahead. For more information, contact the CNS office at 503-246-8831.

Neveh Shalom member Debra Shein is a faculty member in English at Portland Community College and a volunteer for the Oregon Jewish Museum and Center for Holocaust Education.