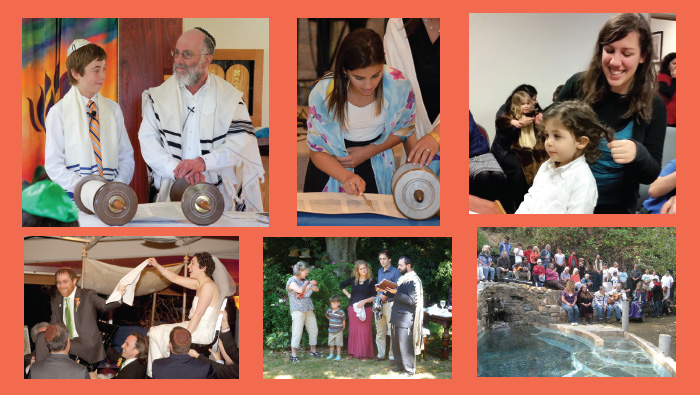 Jewish life is centered around the cycle of life. While daily spiritual living is cherished, it’s the unique moments that bring us together, bring tears to our eyes and remind us of what matters. These moments truly center us. In this review, I will not go into depth about “how to perform” Jewish life cycles. The diversity of traditions and the richness of details are far too comprehensive. Rather, I will touch upon the “why,” addressing the purpose of these lifecycle moments.

BIRTH
There are few moments more spiritually transformative and emotionally precious than the birth of a child. The first major ritual for a Jewish child is the naming. A name is considered by our revered sages to be much more than just a name. Rather a name is an aspiration, a calling. This generally happens, for a boy at the brit milah and for a girl at a minyan (prayer group) or at the simchat bat.

Brit Milah (bris) – Through this ceremony on the eighth day of life (conditions permitting), a baby boy enters the Jewish covenant just as Abraham did 4,000 years ago. G-d partners with humans to complete creation. The Chassidic masters teach that at the cry of a baby at a brit, the heavens are compassionately open for our prayers. It is considered a very sacred moment, not merely a health-based procedure of circumcision.

Simchat Bat – At a simchat bat, the baby girl is celebrated and named. This ritual is an anomaly – unlike most other rituals, the simchat bat has no strict ancient tradition, and thus there is tremendous room for creativity at this ceremony. Thus, the parents have room to create their own tradition in welcoming their baby girl into the world.

Adoption – The Talmud teaches that an adopted child is considered the same as a birth child. He or she, according to Jewish tradition, is considered to be a child of the adopted parents in all ways. It is one of the greatest mitzvot in the Torah to care for and adopt a child and to provide a home and family for one who would become lost to the darkness of an orphanage.

PIDYON HABEN
There is a ritual for a boy who is 30 days old to be “redeemed” with silver coins by his father through a Kohen (one of Jewish ritual priestly ancestry). This ritual is only performed for firstborn boys who were born naturally (no C-section) and whose father is not a Kohen himself.

UPSHERIN
Some wait to give their boy his first haircut until 3 years of age. This ceremony is called an upsherin. A primary kabbalistic (Jewish mystical) explanation is that a boy is trying to confuse the spiritual temptress of his gender. It is a joyous occasion marking a boy’s transition from only being able to receive to now being able to give.

BAR AND BAT MITZVAH
It is only in a limited sense that a 13-year-old Jewish boy and a 12-year-old Jewish girl become “adults.” Developmental psychologists actually now suggest that “emerging adulthood” occurs even later than previously anticipated, at 18 to 26 years old.

Rather, a bar and bat mitzvah (son/daughter of responsibility) are considered “adults” in the eyes of tradition. The core years of Jewish obligation and influence that their parents desperately embraced are now over. The adolescent is now expected to evolve from extrinsic motivation (a life of incentives and rewards) toward intrinsic motivation (driven toward the true, good, holy and just) and must now choose her or his own Jewish engagement with the continued guidance, support, and love of parents and the greater community. While one has not embraced any true milestones of adulthood such as having a full-time job, marriage, raising children, meeting financial responsibilities, etc., he or she is now responsible for having an impact upon the Jewish people and broader society.

WEDDINGS
A Jewish wedding has the potential to be one of the most powerful Jewish rituals. Having led many, there are few that I myself don’t tear up at. It is a reminder of the power of love and union. Families gather together for a happy occasion, which occurs all too rarely; the couple being married, their parents, grandparents, relatives and friends all contemplate their own married lives and look with anticipation to the creation of a new family. There are a few stages to a traditional Jewish wedding: erusin (betrothal on the wedding day), ketubah (statement of obligations), chuppah (the wedding canopy), nesuin (marrying with a ring and witnesses), yichud (marital seclusion and intimacy) and sheva brachot (the seven blessings and celebrations). A Jewish wedding is a celebration of a contractual agreement of shared obligation, responsibility and respect. Love is made concrete by committed actions. Though there are different opinions on the tradition, we break a glass at the end of the ceremony to remind us at the pinnacle of joy that there is brokenness in us and all over the world. It is another way to remind ourselves that while our marriages and families are inherently valuable, they are also vehicles toward enacting social justice and tikkun olam.

CONVERSION
The Jewish community is very open to accepting converts. These individuals who bravely embrace Judaism without having been raised Jewish are to be considered heroes and role models in the community. Jewish law demands that they are cherished, embraced and never shunned.

After completing Jewish learning courses, committing to Judaism and the Jewish people, dipping in the mikvah (spiritual bath) and getting circumcised (for boys), converts are celebrated in the community and are no longer considered “converts” but just “normal” Jews. Let us remember this when we encounter those who have converted, and not look with suspicion on them. They have joined with us in the unique and spiritually uplifting rituals of the life cycle.

DIVORCE
A divorce is actualized through the giving and receiving of a get (Jewish divorce document). While a divorce is innately a tragic event (a relationship has broken and attempts at repair have failed), it can also be a liberating experience and a source of relief and joy. The procedure is simple and quick, but should be performed by a mesader get (a rabbinic divorce expert).

Tragically, today, some “religious” men deny their wives a get, making them agunot (chained women unable to remarry). For this reason, in Orthodox circles, many embrace using a halakhic pre-nuptial agreement to prevent women from being chained to a broken marriage. In Conservative circles, many include the Lieberman clause into the ketubah that gives women an out from the marriage without a get. In most Reform circles, a get is not used at all and is not required to remarry.

DEATH AND MOURNING
One is buried with great haste and great modesty (humble burial shrouds, modest wooden casket, buried directly in the dirt). There is a mitzvah to join a burial society (chevra kaddishah) to assist the cleaning of the body and to guard a body (as a shomer). While always tragic, the Jewish rituals around death, funerals and mourning can be quite profound. The Jewish tradition understands that the mourning and recovery process from the death of a loved one is a long and gradual process. Unlike other traditions (for example, think of many corporations that expect employees to take no more than three days off for the death of a close relative), Jewish tradition makes the trauma of burial short, and the modest casket ensures that we do not feel obligated to spend huge sums to show our respect for the dead. Instead, we understand that after the burial, the full force of pain and loss hits those mourning with a tremendous impact. At this point, our tradition sustains us and helps us to gradually return to our regular lives through the following plan.

Aveilut – year of mourning. While one is an avel (mourner) for a full year for immediate relatives, one only says kaddish for the first 11 months of the year.

Unveiling – removing a veil to reveal the tombstone.

Yahrtzeit – observing the day of memory each year by saying kaddish and potentially also with tzedakah (charity) and visiting the grave.

MAKING LIFECYCLE MOMENTS MEANINGFUL
Very often today, many embrace the party and social aspects of life cycles (the $25,000 bar mitzvah and $50,000 wedding). Judaism, however, comes to stress the importance of having modest celebrations that focus on family, values, God and spiritual aspirations.

We need not spend so much on celebrations. The Talmud (Sanhedrin 29b) teaches that one is not to appear publicly in a way that flaunts his or her wealth, as this lifestyle not only leads to arrogance, but can also shame others and lead them to covet. Histapkut bamuat (being content with less) is a core Jewish value, and Ben Zoma taught that a wealthy individual is one who is content with one’s lot (Pirkei Avot 4:1).

The rabbis regulated spending. As a way of showing “deference to the poor” (Moed Kattan 27), even the richest people were to be buried plainly so as not to shame the poor, and on certain festive days, girls, especially those from wealthy families, were to wear borrowed clothes so as not to shame those who did not have.

Life cycle events should be a time of spiritual reflection creating an ambiance of love by bringing together sacred community. We should work to create more creative and holy celebrations that foster inclusiveness and community building. A wedding, birth, funeral and the like are all opportunities for great spiritual and ethical possibilities and are a time for families to engage in financial introspection (cheshbon ha’kis).

EXTENDING A LIFE
For Rabbi Shmuly Yanklowitz, author of this piece on the lifecycle, teaching
about Jewish values and traditions isn’t enough.
On June 16 Rabbi Shumly Yanklowitz donated a kidney to young Israeli playwright Yossi Azran. Azran, has suffered with kidney disease for 15 years and spent the past 2.5 years on dialysis awaiting a kidney donation.
Yanklowitz, 33, is the founder and president of the Modern Orthodox social action group Uri L’Tzedek and executive director of the pluralistic Valley Beit Midrash in Phoenix. He’s also the founder and CEO of the Jewish animal welfare institute Shamayim V’aretz.
His education and knowledge are extensive: He has master’s degrees in moral development and psychology, and Jewish philosophy; and a doctorate in epistemology, moral development and developmental psychology. He has three rabbinic ordinations: from New York’s Yeshivat Chovevei Torah Rabbinical School, from Efrat Chief Rabbi Shlomo Riskin and a private smicha from Jerusalem-based Rabbi Nathan Lopez Cardozo.
But learning and teaching is not enough; he felt he had to act on his belief about saving a life.
“I have been teaching about social justice and the value of human dignity and saving human life for many years,” Yanklowitz told The Times of Israel from his hospital bed at New York’s Mt Sinai Hospital.
Donating a kidney seemed the perfect way to put that concept into action