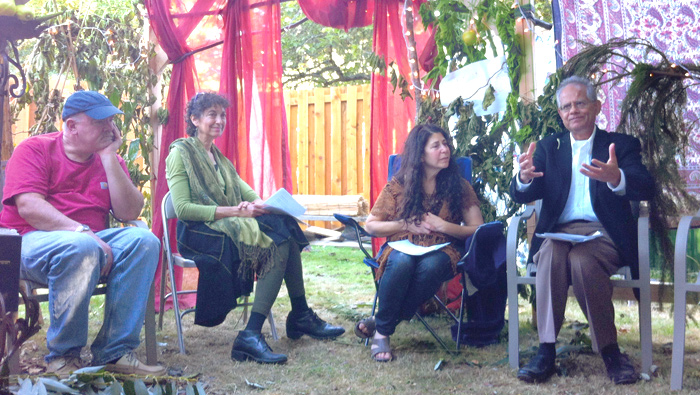 Last January, a friend from my congregation, P’nai Or, loaned me Naomi Klein’s latest book, This Changes Everything, Capitalism vs Climate. My friend had found the book too depressing to finish. The title had been scribbled on a piece of paper magnetized to my refrigerator door for months, so I borrowed my friend’s book. By page four of the introduction I was hooked and motivated to do something, anything! The festival of Tu B’Shevat was five weeks away, a holiday that marked both ecological and economic events. Perhaps, I thought, I could share some teachings from Naomi’s book.

P’nai Or is a Jewish Renewal community that is currently between rabbis and is being led by talented lay-leaders and Maggidot (Jewish storytellers and teachers). I volunteered to lead programming for Tu’B’shevat, the New Year of the Trees. Ancient Israelites counted the beginning and the ending of the harvest and tithing season in midwinter when the sap begins to rise. This was biblical tax day. It is also the holiday we celebrate with a seder that includes eating four different types of fruit to represent the four worlds of reality: spiritual, intellectual, emotional and physical.

Supported by our tikkun olam committee, I was determined to turn many of the ideas in Naomi’s book into a radio play and began writing “The Rising Sap,” which would be read aloud by congregants. The kavanah (intent) was to help raise awareness of the urgency of our situation, generate passion for taking action and hope that, together, we can successfully address climate change.

We wanted to share these teachings with our larger interfaith community, so my good friend, Beth Hirschfield, reached out to our Muslim, Christian and Native American friends, who would speak about the ecological teachings from their traditions.

To put it all together in five weeks felt impossible, but when Hashem plants a passionate seed within us, miracles can happen. At some point the first two lines of a song came to me to the tune of Gloria Gaynor’s song, “I Will Survive.” “First I read the book, and I was petrified … thought we were doomed and there would soon be no more azure skies.” I plunked out the rest of the words, and the play had suddenly become a musical. The heaviness of the topic was made lighter through song.

We had no idea who would come and simply planned for the space we had. Over 70 people showed up, filling every seat and having room for all. We read the play, sang, ate the fruits with their individual teachings and reflected on the ways we need to change our thoughts, emotions and our ways of life. If we are ever to have the insight, courage, strength and determination to face and deal with the ecological crises of our time, it is going to take transformation on all levels of our being.

Then what? To succeed in addressing climate chaos, Tu B’Shevat would need to be just the beginning.

Purim was next and we needed a theme. Haman became a fossil fuel baron planning to frack Shushan and advocating for the TPP, the Trans Persian Partnership. I played Mordecai. And after becoming the king’s new vizier, I wrote policies to help the kingdom switch to green renewable energy and laws to form the Shushan public bank.

I started a Naomi Klein book study group and for Pesach invited the group to my home for a Climate Change Eco-seder. That summer many of us showed up at the Shell No kayaktivist action to help detain the icebreaker Feneca and bring awareness to the Arctic drilling, which, baruch HaShem, has stopped. Heaven only knows what part our study, prayers and actions contributed toward that result. Torah reminds us that every little thing matters.

In Elul, the month leading up to the High Holidays, P’nai Or voted to support and promote Climate Change for Families and Plant for the Planet (ClimateChangeRecovery.org), which teaches children how to become ambassadors for climate action. This became the congregation’s yearly tikkun olam project. The group has two free academies for students in January; visit their website for details.

For High Holidays I wrote another little play, this time about a modern Jonah, followed by an environmental al cheyt (confession of sins). I’d been feeling a bit like Jonah, the way Jonah didn’t want to follow through with his calling because he thought everyone would just think he was nuts and God wouldn’t destroy the city of Nineveh anyway.

The seventh day of Sukkot we traditionally recite the Hoshanot, the prayers for God to help save us from drought, famine, pestilence and exile – the same things we are facing in these climate-changing days. Rabbi Arthur Waskow of the Shalom Center had been imploring congregations to hold a special event on that day, Sukkot Shalom vs. Climate Chaos. This was also the Sukkot of the Shmita year, the seventh year when Torah tells us we are to forgive debt. It was another opportunity to teach the connection between Torah and the economic changes we need to make to keep the worst of the climate disaster from happening and bring social justice to the world.

Climate change is not a theme for just one year. Climate change and the social movement that we all must be part of is the theme of our lives. As overwhelming as the problems are, I have learned there are economic solutions that can not only help solve the climate crisis and lead us to a sustainable way of life on our finite planet, but also hold the potential to finally bring the social justice to our world that we have not yet been able to achieve.

Want to hear the rest of the Naomi Klein song and the updated solutions to climate chaos introduced in the play? Come join us for a Tu B’Shevat seder with P’nai Or and Havurah Shalom Jan. 24 at Havurah Shalom. And be part of The Rising Sap!