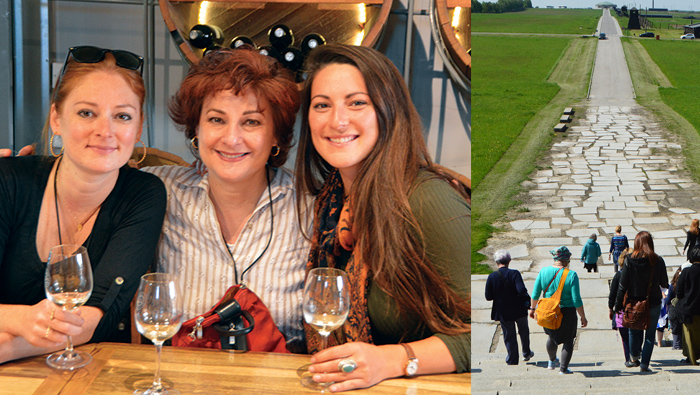 “This was the journey of a lifetime,” says Eve Levy, who organized the trip with the Portland Kollel. “It was so much more than we had originally envisioned.”

The trip itself was a whirlwind: eight days, four in Israel and four in Poland, covering 550 miles in a circle from Warsaw to Lublin to Krakow and Auschwitz and back to Warsaw. In Israel, the focus was on Jerusalem, with one daylong outing to Gush Etzion, just south of Jerusalem.

In Poland, along with centuries-old synagogues and graceful buildings, the group visited one of the largest Jewish cemeteries in Eastern Europe, the Majdanek and Auschwitz-Birkenau concentration camps, and other sites of Jewish suffering during the Shoah.

The diverse group included five mother/daughter pairs – including Levy and her mother, Harriette Fleising, of Toronto, for whom the journey had special meaning.

Though many of the group had grandparents or parents who came from Poland, all four of Eve’s grandparents were Holocaust survivors. Eve visited Poland when she was 19 with a small group but had resisted returning since.

So why now? Eve, who is director of women’s programming for the Portland Kollel, says participants in her ongoing “mothers’ trips” to Israel – conducted in collaboration with the Jewish Women’s Renaissance Project – had been asking for more in-depth opportunities. And the Kollel, looking for innovative programs and new opportunities for education, responded by launching the Poland-Israel Journey.

“We decided it would be meaningful to create a tour that followed the transition the Jewish nation has gone through for the past generations,” says Rabbi Tzvi Fischer, dean of the Portland Kollel. “And we also wanted to broaden the group of participants – opening the opportunity to more people.”

The first trip was an unqualified success, Rabbi Fischer says – in terms of participants’ responses, interest in those who followed the journey through blog posts (portlandkollel.org/blog), and inquiries from individuals and other communities about going on an upcoming tour in May 2018 (see box).

“This was the next step, the next level of information and experiences for us,” says Jennifer Ginther-Reboja, who shared the journey with her mother, Judy Ginther, of California. “Not just for myself and my mother, but for my three daughters, as well. It instilled more of a sense of ownership and empowerment and passion about Judaism – something that’s important for me to share with my family.”

For Judy, this was both a first trip to Israel and an exploration of her Jewish roots. “I didn’t have any opportunity for religious studies as a child, and it wasn’t something I pursued as an adult,” she explains. “Everyone was very welcoming and supportive, and it was so nice to see the bond between the other mothers and daughters. I would absolutely encourage people to make this trip.”

Stacy Cullen, who like Jennifer and others is a veteran of JWRP trips to Israel, says she felt a stronger connection with her Judaism as a result of the journey. “I felt the history – and the footprints – of the people before me.”

Sandy Kennedy Nemer was inspired to develop lesson plans on the Holocaust for her fourth- and fifth-grade students.

Sandy, Allison Sherman and others say some of the most poignant moments came in the gas chambers of both Majdanek and Auschwitz.

“In the gas chambers in Auschwitz, our (Poland) guide asked us to stop and think about how holy that place was,” Sandy says. “To take a deep breath, to close our eyes and to say the Shema.”

“It’s important that people have that tangible experience,” says Jennifer. “By physically being there, it touches your soul in a way you don’t get from a book or from a movie. It just grabbed my heart.”

“We all knew we were going to find something special on this journey,” adds Sarah Rosenberg Brown. “It was a profound and meaningful trip.”

Adriana Zaidenvoren Leibovich, who also went on the March of the Living before the Kollel trip, says the Kollel’s Poland-Israel Journey was a spiritual experience. “It made me connect with myself,” she says.

Adds Eve: “There is a power of knowing who you are and where you come from. It gives you so much more clarity about how to live your life.”

* For Oregon residents, the Kollel is offering a special subsidized rate of $1,800 per person, plus airfare

* The Kollel is exploring options for a tour for both men and women – but for 2018, it will remain a women-only tour.

Sura Rubenstein, a Portland writer, was a participant in the 2017 Poland-Israel Journey.