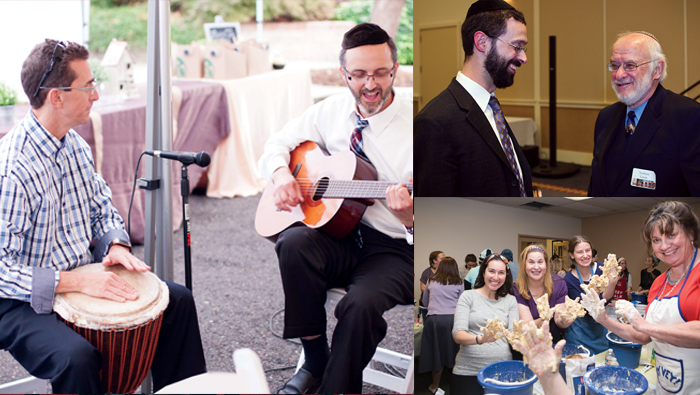 In 2006 Rabbi Tzvi and Esther Fischer, a young couple with three children, moved from Jerusalem to Portland, bringing with them a shared vision. A decade later, they – and the other young families of the Portland Kollel – invite everyone to join in celebrating “10 Years of Success.”

“We have connected hundreds of Jewish families to each other – and to their Judaism,” Rabbi Fischer says of the Kollel.

Those threads of connections – among Jews from across the spectrum of Jewish life – have strengthened the fiber of Oregon Jewish life and created new opportunities for exploration, education and celebration.

“The Kollel has been a blessing for the community,” says Marc Blattner, president of the Jewish Federation of Greater Portland. “They’ve brought an approachable, energetic and education-focused mindset to enhancing Jewish life here in Portland.”

The Kollel’s anniversary celebrations reflect the breadth of its vision: an elegant Wine & Art fête on May 5 celebrating local kosher wines, food and art, and a Family Shabbaton April 1-3 featuring a nationally noted psychotherapist, sessions on science and Torah, and special children’s and teen programs.

Today, the Kollel operates or supports more than a dozen initiatives, ranging from Oregon’s acclaimed NCSY teen program to the Oregon Kosher agency – which among other things supervises the kosher wines highlighted in the Wine & Art event. One of the Kollel’s newest efforts, a women’s program launched just over a year ago, so far has taken 55 women to Israel, with up to 60 participants slated for two trips this year.

This is in addition to the Kollel’s classes. “We’ve reached more than 1,000 people through 10,000 classes, with a total of 100,000 hours of Torah study,” Rabbi Yossi Goldblatt, the Kollel’s director of development and programming, notes with pride.

Rabbi Goldblatt and his wife, Sarah, worked at a Jewish school and orphanage in Belarus before joining the Kollel in 2012. “We help families find their Jewish connection,” he says of the Kollel’s approach. “Wherever you are in terms of observance or nonobservance, knowledge or lack of knowledge – Kollel helps you find the way that you connect.”

The Kollel today includes four couples – the Fischers, the Goldblatts, Rabbi Gadi and Eve Levy, and Rabbi Chanan and Meira Spivak, the other “founding couple” who arrived just weeks after the Fischers.

Meira Spivak immediately started working with Portland’s NCSY teen program, soon helping it transform into one of the fastest-growing chapters in the country. Within a few years, eight Jewish Student Union clubs, a Junior NCSY for middle-schoolers, and Jewish SAT prep and drivers’ education courses joined the mix.

In addition to working and teaching at the Kollel, Rabbi Spivak organizes The Q, a multimedia trivia contest and fundraiser for NCSY so successful that he now tours it to seven other U.S. and Canadian cities. This year, the Portland Q raised nearly $120,000 for youth programs.

Eve Levy, director of women’s programming, and Rabbi Levy, director of adult education, are the Kollel’s newest members, moving to Portland in 2014 from Denver. Within months, Eve led her first “Moms’ Trip” to Israel, launched a series of Rosh Chodesh and other events, and sparked creation of “Shine,” a group of women looking to encourage, strengthen and inspire each other in their Jewish journeys.

In May, she’ll lead a third tour group to Israel, and in June her husband will lead a second men’s tour.

“The Portland Kollel has brought life to my Judaism,” says Jodi Garber-Simon, who went on the 2014 Israel trip. “Through their programs, I have found a strong connection to Israel, to other families in the Portland community and to my faith.”

Sandy Nemer, who was with Garber-Simon in Israel, is equally enthusiastic.

“Kollel is such an amazing place to learn about Judaism and about how we can be better people, better parents and better friends to one another,” she says. “It isn’t a synagogue. It isn’t a place that has an agenda. … for me, it’s a place to grow so that I may be a better person.”

From the beginning, the Fischers and the Spivaks focused the Kollel’s efforts on building connections throughout and among Portland’s diverse Jewish community.

“When we came, the federation counted about 45,000 Jews in the greater Portland area – of whom about 7,000 were members of synagogues,” Fischer recalls. That meant that most of Portland’s Jews weren’t affiliated.

The Kollel taught classes and workshops in synagogues, to be sure, but members also met with people in their homes, in coffee shops and at places of work. “We looked for opportunities for both formal as well as experiential learning,” Rabbi Spivak explains. “We look for ways to let people know that – wherever they are – there’s a way to explore their Jewish connection.”

Lois Shenker, a Jewish community educator, speaker and life coach, is especially appreciative of the Kollel’s nonjudgmental approach. Among her many roles, she is the facilitator for the Portland Mothers’ Circle, a group for non-Jewish mothers raising Jewish children.

Most of her contact has been with Rabbi Fischer, whom she first met when he invited her to join a panel discussion on intermarriage. They’ve had many connections since, including an ongoing monthly Talmud discussion she and her husband, Arden, organized.

“Through Rabbi Fischer, I’ve come to know a truly observant Jew who has respect for Jews all along the spectrum of Jewish observance, as well as those not even Jewish who want to learn and be connected to the Jewish family,” she says. “I marvel at the breadth and depth of his knowledge, joy of teaching and sense of humor. What a gift.”

As the Kollel looks ahead to its next decade, Rabbi Fischer says, it will continue to grow – a growth determined in large part by the needs and character of the community.

The specifics may not be set, but the invitation is what it has always been: Come and discover your Jewish connection. Find your spark. And don’t forget to celebrate.

The Kollel is an education and outreach organization that offers a variety of programs and initiatives to help people discover and explore their Jewish connections.

What does it do?

Education: A number of classes, ongoing and short term, on topics ranging from parenting issues to holiday celebrations to Talmudic discussions.

Shine/Women’s Programming: Everything from monthly walks to Rosh Chodesh celebrations to visiting speakers. Aims to provide empowering and inspiring experiences in a nonjudgmental environment.

Teen Programming/NCSY: Portland NCSY is nationally recognized for its engaging events and successful programs. Also supports seven Jewish Student Union groups in area high schools. Kollel-affiliated, but an independent program not funded by the Kollel. New this year is a Passover cookbook. oregon.ncsy.org

Campus outreach:  Akiva on Campus, a program at the University of Oregon.

Community collaborations: The Portland Mikvah, the Portland Eruv and, the annual Purim Carnival at the MJCC.

Funding: Kollel is a 501c3 nonprofit organization with 75% of its funding coming from more than 400 local donors across the spectrum of the Portland Jewish community.

April 1-3: The Family Shabbaton at the Airport Sheraton