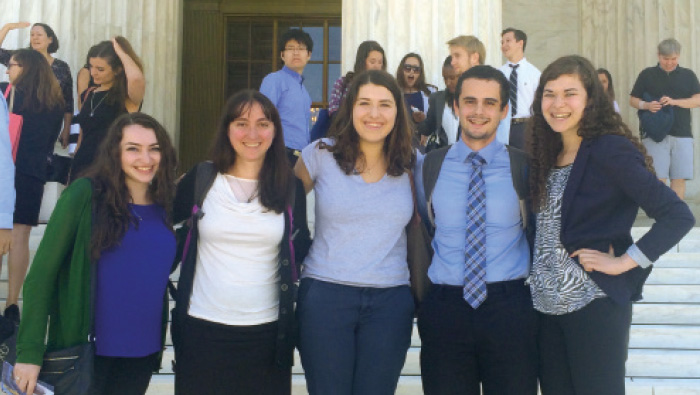 A summer internship in Washington, D.C., was an eye-opening experience for Portlander Talia Berniker, now a sophomore in the Robert D. Clark Honors College at the University of Oregon.

The daughter of David & Susan Berniker, Talia participated in the Machon Kaplan Summer Internship Program of the Religious Action Center of Reform Judaism. The RAC assigned Talia to intern for the Jewish Council for Public Affairs D.C. office.

“Machon Kaplan is an internship program for undergraduate students interested in Judaism and social justice,” according to rac.org. “It provides students with a meaningful social justice internship, the opportunity to engage in academic study related to their internships, and a community of like-minded students with whom to share their experience.”

Talia already had experience in D.C. having attended RAC’s L’Taken Washington Seminar with her confirmation class at Congregation Beth Israel. “I distinctly remember writing my lobbying talking points about climate change and getting the opportunity to share my thoughts with our Oregon senators,” she says. Additionally, she interned in Sen. Ron Wyden’s Portland office the summer before starting college and became really interested in politics and policy.

“I knew interning in Washington, through a nonprofit, would give me a new perspective on politics,” she says of her decision to apply for the Machon Kaplan internship. “I have always had a fantastic time through Jewish summer programs such as NFTY in Israel and Jewish summer camp, so when I got an email about the Machon Kaplan program I figured it would be a good fit.”

She liked the idea that most Machon Kaplan participants live together in the dorms at George Washington University and attend classes together at the RAC. Spending her summer as part of a community surrounded by other teens interested in social justice was especially appealing.

She found the lobbying experience meaningful and empowering. She had the opportunity to lobby in the offices of Sen. Ron Wyden and Rep. Earl Blumenauer about the Green Climate Fund, “an issue important both to me and to the Jewish Council for Public Affairs where I interned for the summer.

“Other highlights were joining in the festivities in front of the Supreme Court after gay marriage was legalized and going bowling in the White House bowling alley,” she says. “Attending the Generation Make Progress Summit, which featured speakers such as Elizabeth Warren, Nancy Pelosi and Joe Biden, was also incredible!”

Learning about specific political issues in D.C. was different from how she learned about issues in Portland. “For instance, when I began learning more about the bipartisan Summer Meals Act, I had the opportunity to attend a hearing from the Secretary of Agriculture in the House and then listen to the testimony of two food-insecure people who passionately detailed the impact that nutritional support programs have had on their abilities to feed their families as working, low-income mothers,” she explains. “Being able to hear these testimonials firsthand and to hear from social justice advocates in Washington reaffirmed my confidence in our political system – even when Congress is in a stalemate.”

Although Talia wants to work in a creative industry, she says the internship reaffirmed her desire to also be involved in politics or nonprofit work. She learned about the potential to combine the two through a program called RAC Café, which connects Machon Kaplan interns with MK program graduates.

“After speaking with my RAC Café match, I learned more about the field of political communications and the wide range of opportunities to connect politics and journalism,” she says. “Additionally, this experience reminded me of the importance of being politically active: writing letters to representatives, calling your senator’s office or volunteering with organizations whose values you agree with can make a difference and is often empowering on an individual level as well.”

Since she worked in a Jewish nonprofit, she also experienced the way nonprofits form coalitions to promote policies that support the missions of these organizations. And she saw the impact those organizations can have.

In a blog post during her internship, Talia examined her generation’s need to commit to reducing greenhouse gasses and climate change while reflecting on her “liberal, eco-chic upbringing in Portland.” Talia emphasizes that climate change is a phenomenon that affects everyone, and that Jews should take a leadership role in tackling this issue.

After her internship, she realizes just how important it is for the Jewish community to participate in the political process.

“Attending interfaith coalition meetings opened my eyes to the influence that the organized religious community can have on impacting our nation’s political agenda,” she says.

'Talia Berniker and Washington, D.C., Make an Impact on Each Other' has no comments