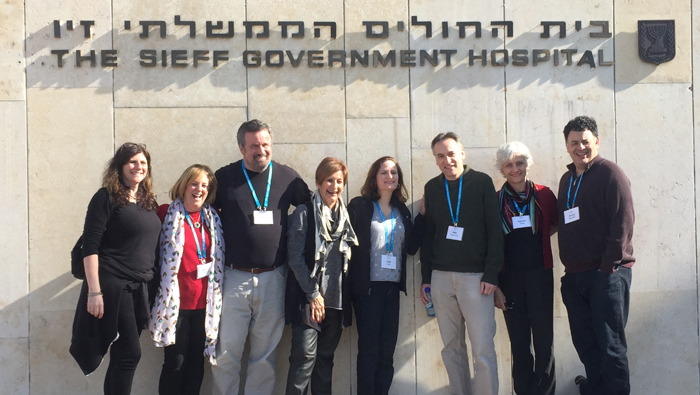 PHOTO: Bob Horenstein, third from right, was part of a JCPA mission to Israel that visited the Ziv Medical Center in Safed. The hospital has treated more than 700 injured Syrians smuggled from Syria into Israel by the IDF.

It’s widely known that Israel is often singled out for criticism and held to an unfair double standard. Nowhere is this more evident than in the relentless Boycott, Divestment and Sanctions campaigns seeking to vilify Israel and in the annual adoption of numerous one-sided, anti-Israel U.N. resolutions.

Now, when compared to the worsening atrocities in Syria, the assault on the Jewish state may have surpassed all previous levels of hypocrisy and absurdity.

During December here in Portland, for example, local pro-BDS groups were actively mobilizing. They were galvanized by what they consider to be the most serious human rights issue in the world, comprising, they say, the destruction of communities, homes and lives. Accordingly, you’re probably thinking that this urgent problem must be the humanitarian crisis in Syria, and that this was a call to action against a despotic genocidal regime.

You would be wrong, however. This campaign wasn’t about Syrian President Bashar al-Assad or his Russian and Iranian enablers. Rather, it was a call to action targeting the American corporation Caterpillar and by extension Israel, which uses Caterpillar bulldozers for military purposes.

At the precise time when a wholesale slaughter of civilians was being carried out in what remained of the Syrian city of Aleppo, these self-proclaimed champions of human rights were preoccupied with other matters: a last-ditch effort to get the Portland city council to divest from Caterpillar due to its “complicity” in alleged Israeli violations of Palestinian human rights. (In the end, the council didn’t put any companies on the city’s Do-Not-Buy list.)

Try suggesting to BDS backers that the Israeli-Palestinian conflict pales in comparison to the appalling bloodbath in Syria, and the response you’re likely to get is that although Syria is “undeniably tragic” (no kidding), it shouldn’t be a pretext for ignoring the plight of the Palestinians. And yet, that’s exactly what they’re doing: ignoring the plight of the Palestinians – in Syria.

Since the beginning of the grisly six-year civil war, 3,400 Palestinians have been killed in Syria as a result of bombings, artillery strikes, torture in prison, disease and starvation. Approximately 150,000 Palestinians once lived in the Yarmouk refugee camp near Damascus; today, fewer than 18,000 remain, trapped amid the internecine violence. Out of desperation, people there have resorted to foraging for leaves, cats and dogs, frequently trying to survive without electricity and water.

But since Israel can’t be blamed for these atrocities, they hold little interest for the BDS movement, thus exposing the blatant hypocrisy of those whose true aim in singling out Israel is to delegitimize the Jewish state.

While Israel advocates were dealing with BDS in Portland, there were also troubling developments at the U.N., where an automatic majority routinely censures Israel.

With all the attention on the late-December U.N. Security Council resolution condemning Israeli settlement activity, it may have been easy to miss the fact that of the 24 resolutions adopted by the U.N. General Assembly at its annual legislative session, 20 were against Israel (only one addressed the situation in Syria). Thus, even as Assad was massacring his own people in Aleppo, the U.N. saw fit to adopt a resolution, drafted by Syria, rebuking Israel for “repressive measures against the population of the occupied Syrian Golan.”

To understand just how perverse this resolution is, one need only look at the two realities that are Syria and Israel. In the former, more than 400,000 people have been killed, mostly by the regime and its allies, 1.7 million have been wounded and half of the population – originally 22 million – have fled the country or are internally displaced, dependent on international aid for daily survival.

Because the Syrian health-care infrastructure has been left in ruins, thousands of those injured have been brought to Israel under the cover of night by the Israel Defense Forces.

Recently, while on a mission organized by the Jewish Council for Public Affairs, I visited the Ziv Medical Center in Safed. Since 2013, Ziv has treated more than 700 Syrians, including 121 children, most of them suffering severe blast wounds from mines or rocket fire. Tragically, many of the children have lost at least one limb.

The cost of caring for the Syrians has been roughly $5 million, which has been almost entirely funded by the Israeli government. The U.N., which denounced Israel for “violations of the Geneva Convention relative to the Protection of Civilian Persons,” contributes nothing.

This scapegoating of Israel isn’t merely hypocritical – it’s obscene. But given the upside-down moral universe in which BDS and the U.N. exist, don’t expect things to change anytime soon.

Bob Horenstein is director of community relations and strategic initiatives at the Jewish Federation of Greater Portland. This article first appeared in the Feb. 7 issue of the Jerusalem Report.