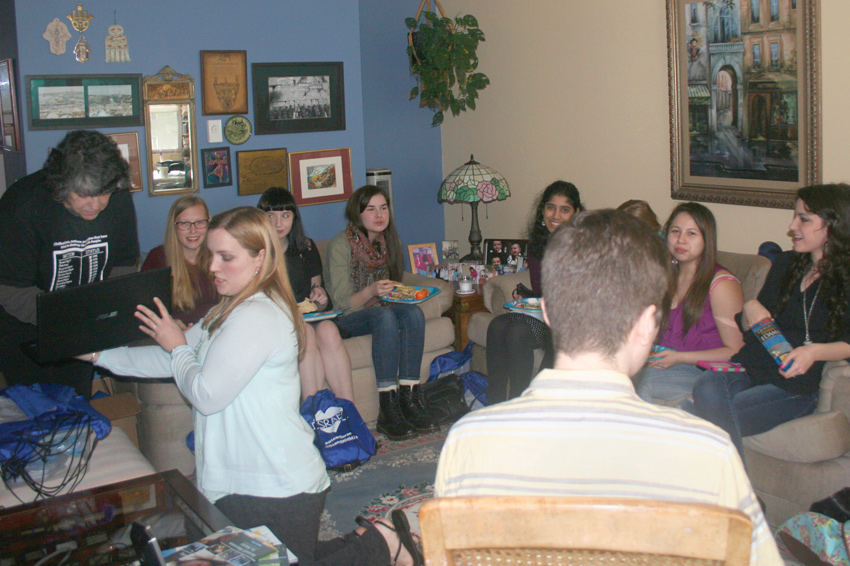 When West Albany High School teacher June Satak learned her students would represent Israel at this year’s Oregon Model United Nations program, she gave everyone thumbs up. The students’ top request? They wanted to separate fact from fiction by researching Israel’s stand on social and political issues. The students would be expected to debate relevant global issues, and they needed an expert to advise them.

June got Tamar Boussi’s name through contacts at the World Affairs Council and Mercy Corp. As former president of Portland Hadassah, winner of their 2007 Israel Advocacy Award and MJCC Exploring Zionism study group leader, Tamar would be a great help.

Student Model United Nations programs take place throughout the world. Oregon holds its three-day event (oregonmun.org) in Eugene, usually at the University of Oregon campus. This year’s program falls on April 9-11. According to June, students from 60 to 70 Oregon high schools mimic U.N. proceedings with councils and committees such as health, environment and women’s issues. Students strive to represent their countries’ positions, leaving their personal points of view behind.

A few schools offer yearlong classes, but for most, like West Albany High, Model U.N. is an afterschool club. Every year, each school submits a list of five countries it would like to represent and is assigned one. “Israel is in a controversial position in the Middle East,” June says. “The students are intrigued by that.”

Tamar Boussi hopped right to it when she got the call from June. “I decided to make them an Israeli meal and talk about how to talk about Israel,” she says. “You need to know important facts but also how to deliver those facts. You’ll have people yelling in your face.”

Tamar first met everyone via Skype. A former high school teacher herself, she began by asking what the students wanted to know. Since they would represent Israeli positions on various U.N. committees, interests ranged from women’s issues to live animal trafficking. West Albany High had represented the Marshall Islands, Turkey and North Korea in previous Oregon Model U.N. events. They said ethnic and religious conflicts including Palestinian issues repeatedly came up.

On March 20, nine students and their teacher arrived at Tamar’s Portland apartment for a full-day teach-in that included role-playing, question and answer, and the movie “A Case for Israel” by Alan Dershowitz. Tamar had prepared enough scrumptious Israeli delicacies to feed a small army, and everyone munched happily throughout the day. Yvonne Bartlett, the Stand With Us (standwithus.com) Pacific Northwest coordinator for high school programs, drove from Seattle to help.

“When I first came, I had the students sit in a circle and tell me one or two things they knew about Israel,” Yvonne says. “I wanted to see where their knowledge was. One girl knew there was mandatory army service, another about equality for women. They knew there was tension in the region between the Israelis and Palestinians. They are bright and asked good questions. They wanted to understand how Israel can be a Jewish state and still a democracy.”

Before saying goodbye, Yvonne said she hoped everyone would visit Israel. The one Jewish student had already planned her Birthright Israel trip (birthrightisrael.com). Others asked for Yvonne’s business card hoping to learn about trips for non-Jewish youth. “These are young people,” Tamar says. “They are the future. If they feel committed, we can’t do more than that.”