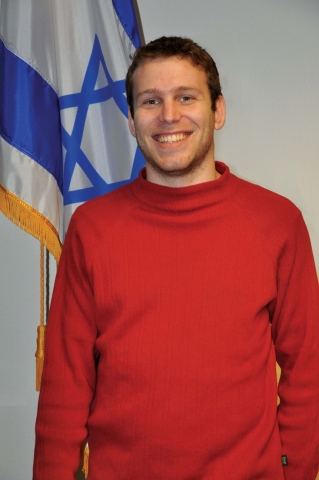 For the first time in about 30 years, Portland has a shaliach (emissary) from Israel, thanks to a grant from the Jewish Federation of Greater Portland’s Community Impact Grants. Amos Meron, 24, arrived in Portland Sept. 12, 2011, for his one-year assignment.

Since then he has met with a variety of groups and individuals to create understanding of, and strengthen local ties to, the Jewish state. We sat down with him recently for a question and answer session on the success of his first six months.

Can you briefly define the role of a Shaliach?

Shaliach is a Hebrew word for emissary. Originally a shaliach worked for the Jewish Agency to promote aliyah (immigration to Israel). Today most are not aliyah shlichim. I am an educator and representative of Israel. I connect the Portland Jewish community to Israel. Part of my job is to help people make aliyah, but I also help get people to Israel in general – on Birthright, an internship, a trip… Israel speaks for itself the best. Even a 10-day trip is better than any program I could do.

Do you reach beyond Portland to other parts of Oregon and Southwest Washington?

My work is based in the Portland area, but I’ve been to the University of Oregon and JSUs in Eugene high schools several times. I’ve visited Salem and Kol Ami in Vancouver.

Your position was funded by a federation Community Impact Grant, but are you also affiliated with the Jewish Agency?

All Shlichim are Jewish Agency Shlichim, but we work with a partnership agency. Here that is the Jewish Federation of Greater Portland.

Are you focusing on a specific demographic/age group in your work?

Part of the reason I wanted to come to Portland was the job description was working with young people … and I’m a young adult. I enjoy working with people more or less in my age group.

What kinds of groups have you met?

I speak at synagogues and to all kinds of Jewish organizations and youth groups. Part of the challenge is to outreach to those who are not part of an organized group, so sometimes I meet one-on-one or with a group of friends. Facebook is an amazing tool for shlichim.

But I do two types of outreach. I also talk to the general community.

I was the main speaker at a Salem Rotary event with about 100 people. In McMinnville, I spoke to Oregon Women for Agriculture about agriculture innovation in Israel. They asked me to speak about water problems in Israel and the solutions Israel has found. I talked about drip irrigation, which is well known. And I talked about desalinization. By 2013, most of Israel’s consumption of water will be from desalinization. Traditional desalinization techniques using heat are expensive and use a lot of energy, but Israel has improved the technology of negative osmosis where sea water is passed through a biological membrane to remove the salts and solids.

What has been your most rewarding encounter so far?

I met one young woman who recently found out her family was Jewish. Her knowledge of Israel was from the non-Jewish community and included a lot of bad lies about the IDF (Israel Defense Force) and what Israel does. After she met me, we started corresponding on Facebook. She started telling me how I changed her mind. You know the saying, “He who saves one soul (life), saves the world entire”? For me, she is that one.

What was your most difficult encounter so far?

When I was on a panel at a high school that hosted DAM (a Palestinian hip-hop group with many anti-Israel lyrics), one of the pro-Palestinian panelists tried to compare Israel to what Nazis did to Jews. I was close to standing up to leave. For me, it was a red line. It was very personal for me – I was an IDF officer and some of my ancestors’ brothers and sisters died in the Holocaust. It was one of the hardest things I had to deal with emotionally. I can talk about the way Israel is NOT similar, but for me it put the level of discussion so low and so personal.

Is there anything about American culture that has surprised you?

Spinach. Does that sound funny? We have spinach in Israel, but I don’t know the last time I ate it there. Here in the U.S., it is so popular. My conception about American culture in general is the same, but it’s the small things that interest me – spinach.

What is your deepest hope for people here to understand about Israel?

Israel is a normal country. Whether people think it is very religious or unsafe or terrible, my message is that yes, the conflict is complicated and we struggle with religious-state issues, but at the end of the day, Israel is a modern country where people have normal problems.

Amos Meron can be reached at amos10@gmail.com or on Facebook (Amos Meron Shaliach).