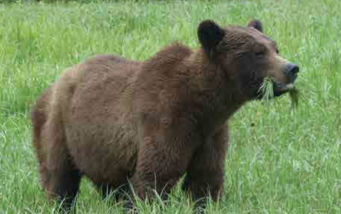 Danger doesn’t come from the direction of the water. So Big Mama, when not nursing her yearling cub, hungrily chews on long stalks of sedge grass just 10 feet from our zodiac. Dan Wakeman’s 20 years of observing yearly life cycles in British Columbia’s Khutzeymateen, North America’s largest grizzly bear sanctuary, has provided him the opportunity to visually bond with many of its grizzlies. Those decades of experience have enabled Dan to share his intimate knowledge of grizzly habits and many of their individual personalities with wildlife lovers – especially photographers.

After a 30-minute flight from Prince Rupert, the single-engine de Havilland Beaver float plane touched down in Khutzeymateen Inlet. Before we finished
unpacking our cameras, a blonde-colored bear sauntered along the nearby shore. Jumping into the zodiac, we noticed that the young male’s back was covered with bite scars. “She is one of Lucy’s,” the Khutzeymateen’s great matriarch offspring, explains Dan as he narrates our experience.

It’s early June and still mating season. This male is on the prowl for a female. Not being the dominant male (Barney is the Valley’s “stud”) he’ll have to “get lucky” to find an eligible female, one without a cub, one who is also in estrus. He might kill her cub, but he won’t mate with her until her hormones make her fertile.
“I’ve known these bears since they were cubs,” Dan says, adding that summers in the Khutzeymateen have been a “labor of love.” Life on the 40- foot sloop, Sunchaser, typically moored in Cedar Creek, is planned around the tide, when the water is deep enough to navigate up the estuary. High tide affords the best opportunity to view bears. Dan is dependent on Inland Charters to fly in his clients and many of his supplies.

That evening, Dungeness crab pulled from Dan’s trap were cleaned and boiled for dinner. Between the various food allergies and taste preferences, only three members of the group enjoy the seafood delicacy. The others eat chicken breasts, mashed potatoes and vegetables.

High tide arrives around twilight. Dan shepherds the five of us into the zodiac to head up Khutzeymateen estuary. In about an hour, we see nine bears. One large male, a sizable scar on its back, stomped on a dead log and hissed. “He’s warning us to back off.”The bear repeats this action a second time. Throttling the boat into reverse, Dan comments, “If we’d been on land, we’d be dead. This is HIS sanctuary.”

A cub swims across the estuary, another runs through the sedge and a large grungy male lumbers out of the woods. Dan surmises that he is coming to mate with the female on the beach. Seeing us, he growls angrily and lopes back into the trees. We continue to hear him in the forest growling. Obviously we have interfered with a romantic interlude.

Sun doesn’t set until after 10 pm in Northern British Columbia, but by 9 pm we were ready to crawl into our bunks for the night. Rain pounds on the skylight of our cabin. We awoke to a day of viewing “grizzles in the mist.” By noon, we’ve observed 11 different bears: a mating pair, several shy “runners,” a few yearlings, sub-adults, cubs, and both male and female adults. After the short June mating season, females will come out of winter hibernation with up to four recently born cubs. Later in the summer, the grizzlies’ coats darken in color when they start feeding on spawning salmon.

Weather again interferes with the rest of the day’s viewing plans. A torrential afternoon rain remains steady throughout the night. Layering in long underwear and fleece, I’m so happy that I brought lots of layers. All of us cozy up under blankets and quilts. The temperature is a mild 59o, but rainforest dampness is penetrating.
This season, Barney, the Khutzeymateen’s dominant male, had not been sighted yet. Motoring up the Khutzeymateen Inlet to search for him was unsuccessful, but we were rewarded with the sighting of a female with two cubs feeding on sedge. We felt that it was a perfect ending to a world class adventure.

Our third and final night Dan prepared barbecued steak and potatoes. Boarding the zodiac for a short evening tour, we returned for a closer view of the sow with two cubs. On our return, we spotted a dark-colored head in the grass near the forest. It was Barney! He was too far away to photograph, but close enough to wish us farewell.
Drifting off to sleep, the distinctive call of the loon reminds us that this spectacular place was in Canada.

IF YOU GO: Take layers of warm clothing including long underwear and fleece. Dan provides rain gear and rubber boots. I wish I had taken my own rubber boots.
Be prepared to overnight (in both directions) in Prince Rupert. My preference is Eagle Bluff Bed and Breakfast, eaglebluff.ca. Hawk Air and Air Canada fly nonstop from the gateway, Vancouver, British Columbia. If the stars align and there is no fog, it is possible to make a close connection on Hawk Air with no outgoing overnight.
Physical requirements include being able to climb in and out of the zodiac, over the sloop transom and down three steep ladder-type stairs to the cabin. There is little privacy, a marine head and a basic shower that was not offered to us.

While viewing is 10 to 20 feet from the bears, Dan can sense, and he backs off, when the bears feel threatened. Many hours are spent, sometimes in the rain, on the pontoon of the zodiac without back rest.