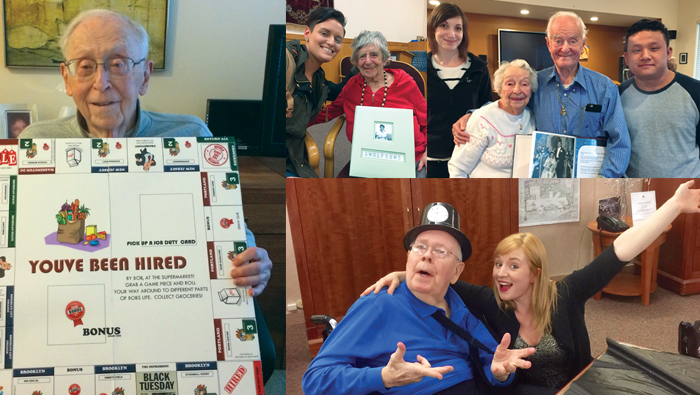 Wikia, a site that claims to be “the home of fandom,” lists hundreds of variations of the game Monopoly. Among my favorites: Ice Cream-opoly, Game of Thrones Collector’s Edition and Queue (Communist Monopoly.) Communist Monopoly? Inexplicably, the site doesn’t mention “You’ve Been Hired,” the personal Monopoly favorite of Portland resident Bob Lustberg and his family.

OK, to be fair, there’s only one copy in existence. But it’s pretty special. It’s the story of Bob’s life, all 96+ years of it, and it was created by Portland State University seniors Justin Howard and Paul Raglione. Wikia, take note!

The game was the students’ final project for a class called “Linking the Generations: Communication, Aging and Society,” one of various options for PSU’s “Senior Capstone” requirement. Cindy Koonz has been teaching this class for 18 years. Her syllabus says the course focuses on “the issues of aging and intergenerational communication” to, among other things, “address (students’) assumptions and stereotypes towards the aging populations and … barriers and success in … intergenerational communication.” In addition to classwork, pairs of students are matched with elders they meet with throughout the term, asking them about their life experiences and finding what they may or may not have in common. Cedar Sinai Park is celebrating its 18th anniversary as a community partner.

“It was not what I expected,” Justin says. “I thought they might be biased towards me because I am not Jewish, but (it) didn’t affect a single thing. The people were very nice, and I even developed a pretty strong friendship with one of the residents. It was pretty cool.”

Bob also had a great time. “We were all sports fans, and I have a big Portland Timbers banner on my sofa. That made it easy to get into a discussion.” Bob had done a similar project with his granddaughter years ago, and he was happy to reminisce again with Justin and Paul. They brought questions for Bob, and they talked and talked, mostly about Bob’s life and what it was like in the days of yore. Bob grew up with silent movies and no television. He remembers horse-drawn fire trucks. His first job was working on the 1940 census. His first computer job was hard for him: his eyesight isn’t good and all the zeros looked like 8’s because they had a dash through them.

The students’ final project presents what they learned in the form of a gift for the resident. Justin and Paul’s “You’ve Been Hired” Monopoly game was, Bob says, a very clever creation. “My career ended in the food business, and the Monopoly pieces are all food products, like bananas, pineapples and a cheeseburger. The cards included pictures of my family and me. We all played the game together, and when I picked a card to get my first job, I drew the janitor.”

Instructor Cindy Koonz is particularly pleased to see the friendships that form. “I come back with new classes (to a site like CSP) and see former students (who) continue to engage with residents or help with activities,” she says.

CSP has even hired former Capstone students. Melissa Bergeron is one such student-turned-employee. She was interested in social work and chose “Linking the Generations” because she thought she might want to work with seniors.

She and her class partner, Alline Biggs, were paired with CSP resident Gene Nistler. “We would come to have dinner with him and talk about his experiences,” Melissa says. “It was fascinating to learn so much about someone’s life. We met his daughter, Susie, and she was able to fill in some of the blanks. She got us pictures so that we could make a photo book for him and his family. We both got really attached because his story is so endearing and his family loves him so much. It’s easy to see why.”

Melissa also spent time with other residents, helping out where she could and filling in on game nights. “I never had a traditional grandparent experience. It felt like having 30 different grandparents,” she says.

In the end, her Capstone experience cemented her belief that she wanted to work with seniors. She graduated last June and started her job as the life enrichment coordinator at CSP’s Robison Jewish Health Center in September.

“We do case management, so there’s a social work element to my job,” says Melissa. “But we really enrich their lives. We have lots of programs. We do personal shopping for the residents. I do something called The Good Old Days where I read This Week in History and we discuss people and events. My coworker is taking some people out for Chinese food tonight. We’ll go to the Tulip Festival in April.”

Melissa was actually offered a job at another facility first, but it didn’t feel right to her.

“I didn’t think the staff was empowered to spend as much time with the residents as I would like, and the activities weren’t as exciting,” she says. “They had bingo and they got their nails done, but they didn’t go to the museum. They didn’t have a cellist come in on Sundays. Here, they do, and when I sit and visit with a resident, I am not stepping away from my job, I am doing it.”

If Capstone students learn important lessons about themselves, the residents and their families also value the experience. Paula Wolfson cherishes the memory book student Kelsey Vadnais made for her mother, Rhoda (z’l), last year.

“Rhoda herself used to conduct oral history interviews with seniors,” Paula remembers. “She strongly believed in helping affirm the life experiences of older adults. She was so proud to have met Kelsey and share her life stories. She beamed when sharing the beautiful book with others. It is now a Wolfson family treasure. Thank you, Capstone!”

'Senior Connections' has no comments