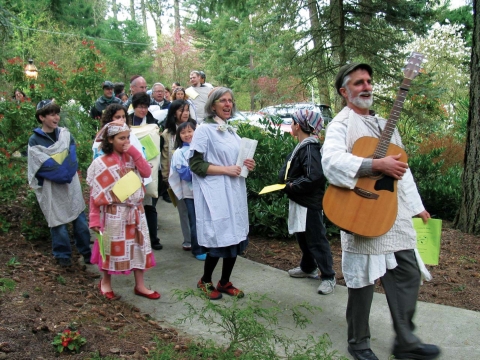 Passover is one of the most compelling Jewish holidays.

Jews have struggled to observe it during the most difficult of times and circumstances – whether in grinding poverty, on the battlefields of wars or at the peril of their lives in concentration camps.

Its rituals draw in Jews who have ceased other forms of religious observance, while the story of the Israelites’ journey from slavery to freedom has inspired countless other peoples in their struggles.

“People love the Seder,” says Emily Georges Gottfried, executive director of the Oregon Area Jewish Committee, which recently conducted its 13th annual Interfaith Seder. “It speaks to the universal ideas of freedom – of being together as a people, and becoming free.”

This Passover season, families and friends will gather together to tell the story, to share familiar and new foods, to celebrate old traditions and perhaps begin new ones. Some will polish heirloom silver and bring out special dishes and treasured melodies. Others may add a Miriam’s Cup, symbolizing Miriam’s Well, and perhaps an orange, symbolizing the fruitfulness of all Jews, including women and gays.

Whatever the specifics may be, the observance celebrates the themes not only of freedom but of family, community and connection.

“The Seder table involves the entire family and the entire person,” says Rabbi Motti Wilhelm, who expects more than 700 attendees at nine Chabad seders to be held throughout the state (www.chabadoregon.com for locations). “The richness of the experience and the potency of the message have reached so far into our psyche that this event is hard to miss.”

“Every year, I see the connection – the “dor l’dor (from generation to generation),” says Carol Danish, who this year will celebrate the holiday at her daughters’ homes. “When I look around the table and all my children are celebrating Passover, that is the most nachas (joy) that I get – that we’re still carrying on the tradition.”

Danish, whose family came to Portland in the early 1900s, sets the Seder table with an Elijah’s Cup from her grandfather, Israel Weinstein, who emigrated from Poland, and candlesticks from her grandmother, Pearl Leopold, who came from Odessa, Russia.

The foods, too, honor family: spinach latkes and two kinds of gefilte fish, one boiled, one fried, from each of Danish’s grandmothers. “It’s very important for mothers to pass either a recipe or something else along,” says Danish. “The heritage part of Passover is vital.”

Danish’s daughter, Debra Plawner, sees Passover as a “perfect mid-year review,” coming as it does six months after Rosh Hashanah. “It’s an opportunity to ask: ‘How am I doing? In what ways am I not free?’”

She developed a Haggadah to use with her young family and family friends to help make the holiday more meaningful. “It’s a lot of dialogue between grandparents and grandchildren,” she said. “And for the children, they have an amazing sense of pride when they are invited to recite the ‘Mah Nishtanah (the Four Questions).’”

For Charles and Jo Levy, Passover also is about tradition – but in their family, it’s a combination of Charles’ Sephardic Moroccan traditions and Jo’s American Ashkenazic customs.

As he describes the traditional foods, it’s easy to see why: fava bean soup with cumin and garlic; fish with preserved lemons and paprika, cilantro, garlic, ginger and saffron; five or six salads; two main courses, perhaps including lamb with Moroccan truffles, and so on. There will be both Ashkenazic and Sephardic charoset. (Some Sephardim eat rice and legumes during Passover; Charles Levy said that in his part of Morocco, only fava beans may be eaten during the holiday.)

One special Moroccan custom: “Right before we start the ‘Ha Lachma Anya (This is the bread of affliction)’ passage in the Haggadah, we take the Seder plate, raise it over each person’s head, and sing the same verse, ending in ‘B’nei Chorin (Free Men).’”

Matzah is particularly evocative for Levy. “Our religion is based on action,” he said.

“We took on the Torah even before we knew what it was. During Passover, we stop eating bread and we eat matzah. If you want something, you do it.”

For Rabbi Gary Schoenberg of Gesher, matzah is also a means of teaching the Jewish story: “That we were once strangers in a strange land, and that we identify with the most vivid search for home.”

Over the past 22 years, Schoenberg and his wife, Rabbi Laurie Rutenberg, have welcomed hundreds of non-affiliated Jews to their home for interactive, theatrical Passover seders that they hope will become a bridge to greater Jewish connection.

“A generation ago, Yom Kippur was the most observed Jewish ritual,” Schoenberg said. “Today, it’s Passover – because Jews today are more focused on Jewish nourishment and joy, and they need connection to family. Passover is at the center of the map for that.”

Gesher will hold at least four Seders this season (www.ourjewishhome.org for details), dramatizing the Jewish journey from bondage to freedom.

“Like Jews, each faith needs a tradition that celebrates nourishment, joy and a connection to a deep tradition of welcoming the stranger,” Schoenberg said. “Not everything in the world is fair, and with Passover, we identify with the struggle to make the world a more just and caring place.”

Their Seders, as all Seders, will tell the story, and be a link between the Jewish past, the Jewish present and our Jewish future.