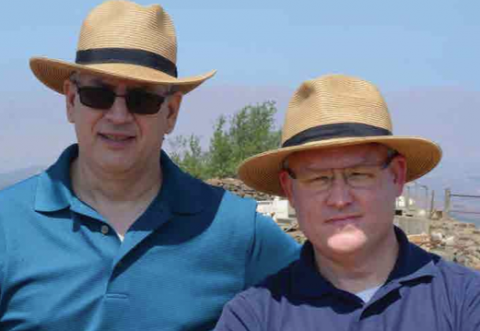 In September I traveled to Israel for a Port Security Educational Seminar sponsored by the American Israel Education Foundation, the charitable organization affiliated with the American Israel Public Affairs Committee. It was my first opportunity to travel to Israel, and, in addition to professional development relating to port security, I was interested in experiencing the situation firsthand given the United States’ long relationship with Israel and its people. I came to Israel with the typical American pragmatism of, “Well I shall finally get an understanding of what is happening, and then I shall be able to formulate a solution in my mind of how the problem could be solved.”

Pragmatism soon became a realization that the situation is extraordinarily complex. Complex in terms of understanding the significant and continuing presence of the Jewish people in the Holy Land through the pre- and post-Zionist aliyahs, the legitimate establishment of the State of Israel under the principles of international law and the subsequent defense and maintenance of the nation in armed conflict throughout the second half of the 20th century. This had to be compared with the story of Palestinian Arabs, who possess a different narrative regarding who has been in Israel and to whom it belongs. I think one has only to come to Jerusalem to understand the hope democracy promises for all. I saw many races and religions coexisting in relative peace. I confess the presence of the security barrier was a troublesome reminder of the price paid by those seeking to adhere to democratic principles, but who are terrorized from within their own population.

I was struck that Israel recognizes that the barrier is not a desired solution, but it is a reasonable solution when balanced against the efforts to ensure opportunities for those who reject violence to cross the barrier and participate in the nation’s economy. What I observed at every location we visited, whether a civilian security establishment or an IDF facility, was the youth of the nation serving. This leads to a direct connection and interest in the nation through their service. I was particularly struck by the universal experience of national service in one capacity or another among citizens both young and old, and how it created a common bond, dialog and investment in the nation. This bond was plainly apparent in all the people I met.

Whether they were involved in government or the private sector, they all shared this purpose in the life of the country. Israel’s commitment to democratic principles sets it apart from neighbors who have not made the transition to democracy and continue to rely on suppression, dogmatic application of religion and violence to achieve social stability. Certainly, Israel cooperates and collaborates with its international partners to defend its sovereignty. However, such efforts would not be possible without the commitment of a democratically elected government committed to carrying out the will of the electorate. I think it is imperative for anyone seeking to understand the situation that Israel faces to make direct contact with the country and its people in a substantive way. If people are unable to make the journey, there are a variety of ways to become educated about the current situation and the long history that has led to this point.

Whether through contact with people from Israel or through study of legitimate educational sources, all Americans should be familiar with the situation, should make their own educated decision about our country’s relationship with Israel and then should participate in our democracy accordingly whatever their opinion. It has become vogue in America to equate democracy with a disassociation from any form of government and a concerted effort to ensure government’s influence is reduced to the absolute minimal influence in the life of the individual.

What Israel shows us is that government – democracy – is a pact and partnership between the people and the institution and that each is codependent on the other; each requires the robust and deep interaction of the other to ensure continued progress toward peace and the maintenance of each person’s individual freedom and well being. The recent war was still extraordinarily fresh in the minds of all of the people we visited. This, combined with the brief amount of time since the cease-fire, caught Israelis at a unique moment. They were able to communicate the fear and uncertainty during the indiscriminate rocket attacks, their faith and support in the government action to bring the attacks to end, and an ability to reflect on their place as Israelis faced with the continuous fear of attack, if not from Gaza, then perhaps Syria and the conflict there. I was struck by the resilience of the people and their commitment to life and liberty, particularly in the shadow of such uncertainty, danger and loss of life. In the United States it is not uncommon to hear that freedom and democracy are hard work.

In Israel these words rang true; due to the recent war I felt able to understand how committed and dedicated the Israeli people are to the principles on which their country was founded. I feel I now have the foundation to understand Israel, its people and what they are achieving in a beautiful land for all citizens, Jewish and non-Jewish alike. We in the United States faced analogous challenges in our early history, and I feel a new affinity for a country hacking out and realizing a democracy in their own unique “wilderness.” I note finally that recent events in Jerusalem again test the Israeli people and government. I hope for continued restraint from all quarters and a repudiation of terror. It is time for all legitimate parties seeking a solution in accordance with international law to reject terrorism and indiscriminate violence.

Friendship, partnership and collaboration are crucial. Friends will not always agree, but a special relationship based on respect and trust that will seek and achieve common goals of peace and coexistence in the region is my hope … and that those who are willing to fight and sacrifice for peaceful democracy are welcomed to join in partnership with Israel and the United States in these endeavors.

Geoffrey Owen is marine security manager for the Port of Portland.