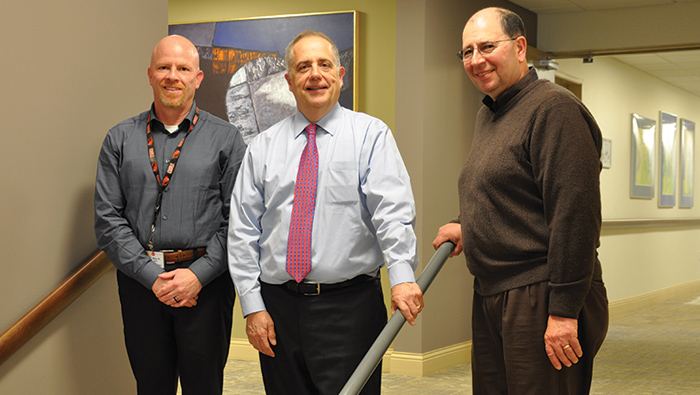 Robison Home has reopened as a state-of-the-art, short-stay rehab center.

Cedar Sinai Park’s legacy building still houses the synagogue, which is open to all CSP residents and guests, and Adult Day Services in an attached building. But the hallmark of Robison Health & Rehabilitation Center is a modern rehab center with 44 private rooms featuring en suite bathrooms with walk-in showers.

“This is a change in the mix of Cedar Sinai Park services,” says David Fuks, who served as CSP’s interim CEO from May through September and is continuing to assist with the transition. “Our goal is to help people succeed with the lowest (possible) level of care.”

The rehab facility will help people return home as soon as possible after a significant health event such as a heart attack, stroke, broken bone or other trauma. Most patients will stay only two or three weeks.

“Rehab is a natural fit for this campus,” says Robison Administrator Mike Martynowicz. “We have assisted living, housing with services and in-home care. This will help patients coming from the hospital get back to those areas. It’s a big gap if we didn’t have this.”

The new facility and equipment are “beyond compare,” says Mike, who has worked in post-acute care most of his career. “I haven’t seen anything like it before. Every little detail has been thought of.”

Before taking the reins at CSP as CEO on Sept. 25, Martin Baicker served as CEO of a Jewish senior campus in Massachusetts that offered a similar range of services including post-acute care.

“This (rehab) is a needed service for the community,” says Marty. “It helps with the mission of the community, and it helps the financial side.” He notes that in Massachusetts about 80% of the rehab patients were covered by Medicare, and the remainder had private insurance to cover the cost.

“This increases the likelihood that Robison will be able to break even,” says David, adding that the goal may take about a year to achieve. As a nursing home, Robison Home typically operated at a deficit, because 60% of the residents were on Medicaid, which pays about 25% less than the actual cost of care. Community support has made up the gap.

CSP residents on Medicaid and others who need long-term care now live in the new Harold Schnitzer Center for Living, which has four households, each with 12 residents. “They are living in homes,” says David.

“Robison will be useful to our residents in Rose Schnitzer Manor (assisted living) and the Harold Schnitzer Center,” says David. “It will be easy to access rehab. They don’t need to change their room, they can come in and get rehab.”

Residents from CSP’s four affordable housing buildings in downtown Portland will also be able to come to the new rehab center to assist their transition from hospital to home.

The need for post-acute rehab centers arose from the shift in medical care in the United States in recent decades.

“After surgery, you used to get rehab in the hospital,” says David. “These days surgery is outpatient or very short stay.”

At Robison, patients can deal with their health issue and get physical and occupational rehab to develop the skills to return home. “This is designed for short stays,” says David. “People do better if they go home.”

David, who returned from retirement to lead CSP during the search for a new CEO, says that the community now has two formidable leaders. Marty is CEO of the campus, and Mike is administrator of both Robison and the Harold Schnitzer Center for Living.

“Marty is a seasoned administrator who knows his way around all aspects of health care within the Jewish community,” says David. “Mike has already improved the care in this organization and is pulling together teams that will fulfill the quality of care this community has always been known for.”

Through leadership, fund-raising and commitment to the Fifth Commandment, the community has enabled the three men to advance CSP’s mission to serve the elderly. David says, “We are the conduits of the mitzvah this community has performed.”

Retaining the name Robison is an important reminder of that mitzvah according to David.

“Hannah Robison deserves to be honored because of what she represents in this community,” he says. “During the Depression – and I had this story confirmed by Jerry Stern, z”l, who lived in the neighborhood – Hannah went around the neighborhood with two cloth bags. Anyone who had food put it in, and anyone who needed food took some out. It was totally anonymous. She went to every house, and no one knew who put in and who took out. … For us to continue to honor her memory as we move into a new phase of health care is brilliant.”

Other names are also being honored with the refurbished facility. The synagogue, scheduled to reopen later this month, is being named in honor of Sara Cogan, who was killed by a car during her term as CSP president. Jim and Susan Winkler made a gift with the opportunity to name Adult Day Services, which is scheduled to return to the legacy building late this year, will honor the Winkler family’s gift from Jim and Susan Winkler.

A formal dedication of the renovated facility is being planned for some time in the spring.

'Robison Home reinvented as rehab center' has no comments