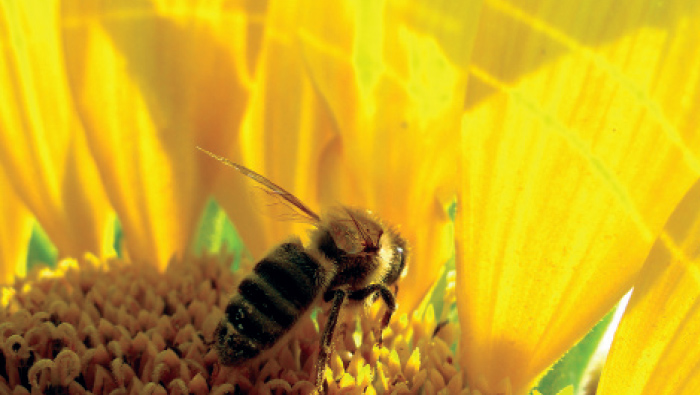 The signs of fall are everywhere. The leaves are turning vibrant shades of red and gold, the scent of pumpkin lattes wafts gently on the breeze and the crisp, cool nights grow long as the Pacific Northwest prepares for winter. Even for urban dwellers, the Earth and its seasons help to define time for us.

For the ancient Israelites this connection was woven deeply into the fabric of everyday life. The rhythm of the seasons was inextricably linked with religious observance while the Temple still stood in Jerusalem. Many of the holidays and festivals, including Rosh Hashanah and Sukkot, have roots in the agricultural cycles of ancient Israel.

It’s no coincidence that the cluster of autumnal Jewish holidays occurs in the Hebrew month of Tishrei, the start of the rainy season in Israel. Long ago these holidays would culminate in a plea to G-d to send rain to the Earth. The seven-day festival of Sukkot was immediately followed by the holiday of Shemini Atzeret (which means eighth day of assembly in Hebrew), an ancient day of prayer for rain that is still observed by some. In Oregon we tend to take rain for granted. Often it is just another thing to kvetch about. For our agrarian ancestors, however, rain was often the difference between life and death.

This year, the High Holiday season officially kicks off with the arrival of Rosh Hashanah at sundown on Sunday, Oct. 2, as we usher in the New Year of 5777. In our time, the most important days on the Jewish calendar are the Days of Awe – 10 days of introspection, reflection and soul-searching neatly bookended by the twin pillars of Rosh Hashanah and Yom Kippur. In the Temple era what we call the High Holy Days were merely a prelude to the far more auspicious harvest festival of Sukkot, which was widely known as the Feast of the Ingathering, (Chag HaAsif). In fact, some historians believe that during the time of the First Temple (957-586 BCE), Rosh Hashanah and Yom Kippur were not separate holidays at all but rather part of the Feast of the Ingathering.

Rosh Hashanah was considered the start or “head” of the new economic and agricultural year. The day was observed in the Temple by the high priests, who would make a burnt offering (animal sacrifice) to G-d. Trumpets and shofars were blown and there was a cessation from work for the people. On Yom Kippur, the priests would make a sin offering to G-d on behalf of the entire house of Israel. A scapegoat was released into the wilderness bearing the symbolic sins of the community upon its head, thus freeing the people to embrace the coming year.

The main event for the Israelites, however, was the seven-day festival of Sukkot. One of three annual biblically ordained pilgrimage festivals, this ancient harvest celebration honors the “ingathering,” or the processing of the fruits of the harvest. Grapes are stomped and made into wine; wheat is taken to the thresher and other crops are made ready for storage and consumption. Sukkot is also known as the Feast of Booths because it commemorates the 40 years that the Israelites wandered the desert in search of the promised land. Pilgrims from all over Israel would travel to Jerusalem to worship at the Temple, praise G-d and rejoice in the harvest. Sukkot was also believed to be the time of year when G-d would judge the world and decree how much rain would fall. Each morning during Sukkot the high priests would conduct a water-drawing ritual called the Water Libation (Nisuch Ha-Mayim). Water would be poured upon the Temple’s altar in a demonstration of faith that G-d would provide rain for the coming year. This ritual was an occasion of great joy for the people, who would watch with anticipation as the water was carried to the altar, accompanied by musicians and much merriment. The final day of Sukkot is known as Hoshana Rabba, when to this day, in an echo of ancient Temple ritual, Jews will beat the ground with willow branches and recite prayers for rain and a bountiful harvest. Following Sukkot on Shemini Atzeret, the high priests would plead to G-d to send just the right amount of rain for the coming year. Not so little that crops would wither and die and not so much that the world would be drowned in torrential floods.

In modern times we have become disconnected from the land and from the Earth that sustained our ancestors. Fortunately, in Oregon it is easy to become reacquainted with an old friend. There are many ways that we as 21st-century Jews can reconnect with our past with an eye toward the future. Community-supported agriculture is a very Oregon way to support local farmers and food producers. Farmers offer shares of the expected harvest to subscribers, who receive periodic shares of produce along with eggs, dairy and other foods. Tuv Ha’aretz is a Jewish food box that partners with local farmers, wineries, breweries and bakeries to bring the fresh local and kosher food to you. For the High Holidays a special Rosh Hashanah box contains a round raisin challah from Portland’s Challahman, local organic apples and honey. Tuv Ha’aretz is a great way to reduce your carbon footprint while discovering the bounty that our wonderful state has to offer. Enhance your Shabbat table with locally grown and produced kosher wine from Pacifica winery and beer from Leikam, Oregon’s first and only certified kosher nanobrewery! Learn more at tuvhaaretzportland.com.

While you are enjoying your apples and honey on Rosh Hashanah, be sure to spare a thought for the bees that helped to make it all possible. The bees need our help. Currently, honeybees are threatened by colony collapse disorder, which kills millions of bees each year. Humans and other animals depend on bees to pollinate all sorts of crops, including apples. You can do your part to help save the bees by making a donation to Friends of the Earth to ensure that future generations of Jews will have apples and honey to usher in all the sweet New Years to come. Check them out at foe.org.

Another great way to connect with the Earth is to pack up the whole tribe and go apple picking in the Columbia River Gorge. The Hood River Fruit Loop is a scenic 35-mile loop chock-full of farm stands, wineries and u-pick farms. Visit hoodriverfruitloop.com for more information. Those apples and honey will taste even sweeter when you’ve picked them yourself.

Sometimes it seems as if the entire time between Labor Day and Halloween is one nonstop yom tov (Jewish holiday). We Jews have been ringing in the New Year with a month-long bash for over 3,000 years! Apparently our ancestors knew how to party.

The Jewish holidays, while biblically ordained, have evolved over time, with layers of depth and meaning added by the high priests and later the rabbis and laypeople. For our distant forebears, the “head” of the year was a time to rejoice in the harvest and pray for rain. It is written in the Talmud that during Sukkot when the Temple still stood, the high priests would sacrifice a total of 70 bulls, which represented the 70 known nation-states at the time. The plea to G-d was universal, on behalf of all humanity, on behalf of all the Earth. Rashi, the 11th-century rabbi and Talmudic scholar extraordinaire, said that the 70 sacrifices were made during Sukkot “to bring forgiveness for them so that rain shall fall all over the Earth.” So when that Oregon rain starts to come down this fall, remember the generations who depended on that rain for their very lives.