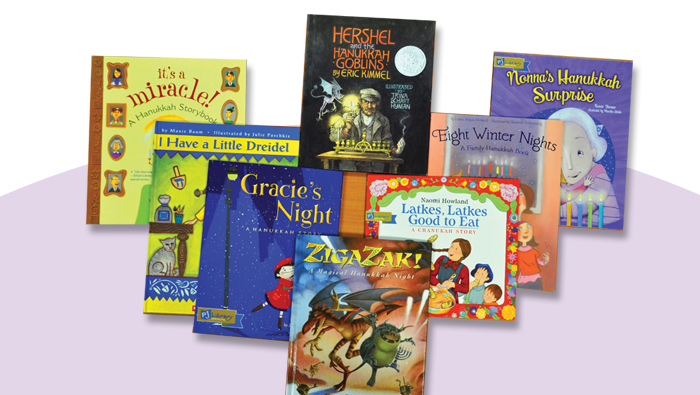 For most of Jewish history, Hanukkah was a relatively minor festival, technically requiring little more than the lighting of the menorah and recitation of the blessing. However, in the years following the first world war, American Jews began to reinvent the holiday by borrowing from some of the more commercial aspects of Christmas. After decades of decline in observance, Hanukkah experienced an unprecedented resurgence in significance.

As Jenna Weissman Joselit explains in The Wonders of America, “For much of its history, Hanukkah fared poorly in the New World, a victim of neglect.” However as a new consumer culture began to take root in the 20th century, Hanukkah began to emerge as a holiday on par with the American Christmas celebration. Madison Avenue, eager to capitalize on this new opportunity, wasted no time embracing it. The publishing industry noticed, too, and soon bookstore shelves were overflowing with books that taught the story of Hanukkah to young children.

The Hanukkah story is an epic tale of good versus evil. Much of what we know of the story comes from the Roman-Jewish historian Flavius Josephus, who chronicled the history of the Maccabees in his book The Jewish War.  In the second-century BCE the Greek-Syrian King Antiochus IV ruled over the vast Seleucid empire, which included the province of Judea. Antiochus, in an attempt to Hellenize the Jews there, had outlawed Jewish worship throughout the province. The observance of both Shabbat and Kashrut, circumcisions and sacrifices to G-d at the Second Temple in Jerusalem were all forbidden under pain of death. The Syrian army looted the Temple and in the process extinguished the ner tamid or eternal light, desecrated and destroyed the Torah, sacrificed a pig on the Temple’s altar, and in a final insult dedicated the Temple to the Greek god Zeus. Then just when things seemed bleakest for the Jews, a hero arose who fought like an avenging angel of the Lord, a mighty warrior by the name of Judah “the Hammer” Maccabee. Judah gathered a ragtag band of misfits known as “Maccabees” to revolt against King Antiochus and his mighty army. Against all odds the Maccabees prevailed and defeated the king and his men. The defiled Temple was restored and dedicated (Hanukkah being the Hebrew word for dedication), and the meager single day’s supply of oil for the Temple’s menorah miraculously lasted for eight. Since those ancient times Jews have commemorated the Festival of Lights with story, song and celebration.

The story of Hanukkah is a celebration of the tenacity of the Jewish people. That Jews around the world continue to commemorate a victory that occurred more than 2,000 years ago says a great deal about the Jewish soul and the veneration of memory. A powerful tale of resistance and redemption, the Hanukkah story must be handed down L’Dor VaDor, or from generation to generation.

What better way to teach your children about Hanukkah than with the gift of books? Support your local bookstore and spend some Hanukkah gelt. There are so many great Hanukkah books out there, not to mention coloring books, sticker books and even Hanukkah-themed Mad Libs! By the way, Hanukkah Mad Libs are a great way to let your kids have some creative fun. Here are eight fun and fascinating Hanukkah books to read with your kids during Hanukkah, one for each night.

1) Hanukkah at Valley Forge by Stephen Krensky: Wonderfully told and beautifully illustrated, this stirring tale of independence and freedom is drawn from General George Washington’s personal recollection of meeting a Polish-Jewish soldier at Valley Forge in 1777. In this fictionalized account of a historical event, General Washington learns about Hanukkah from the soldier. Shifting between the time of the Maccabean Revolt and the American Revolution, the author draws wonderful parallels between the two conflicts. The book gains a heightened sense of realism by incorporating George Washington’s own writings as dialogue. As Washington explains to the Polish soldier over the glow of the Hanukkah lights, “The fight for liberty is an ancient one.”

2) The Golem’s Latkes by Eric Kimmel: Charming tale of golems gone wild written by Portland, OR, author Eric Kimmel. When the Rabbi of Prague must visit the emperor, he leaves it to his housemaid, Basha, to prepare the house for Hanukkah and make the latkes. The rabbi allows Basha to work with his golem, a mythical creature made of clay. “Mix, chop, peel, fry” is the golem’s constant refrain as he labors without cessation. The dull, yet seemingly satisfied expression on the face of the golem as the latkes pile up all around him and Basha’s acerbic wit and confident incompetence combine to make this book a true Hanukkah gem.

3) Hershel and the Hanukkah Goblins by Eric Kimmel: Yet another masterpiece from the undisputed king of children’s Hanukkah books. When Hanukkah is under attack by grumpy goblins, only Hershel of Ostropol can save the day. A mischievous trickster, Hershel employs cunning and guile to outwit the Hanukkah goblins and trick them into celebrating Hanukkah with him. A hero of Ukrainian folklore, Hershel of Ostropol was an actual historic figure who lived during the late 18th and early 19th centuries.

4) Runaway Dreidel by Leslea Newman: This whimsical parody of “Twas the Night Before Christmas” has a decidedly Old World shtetl feel to it. When a spinning dreidel runs amok through the neighborhood, chaos ensues as the entire town pursues the rogue top. Before long the village is turned upside down as children, parents, grandparents, aunts and uncles all chase the runaway dreidel. This book will especially delight younger readers.

5) Hanukkah in Alaska by Barbara Brown: This charming tale of a young girl’s Hanukkah celebration that is crashed by an uninvited moose has a sweet, gentle rhythm to it. The shadowy illustrations of the moose and the eerie depiction of the snowy daytime darkness really help to convey what it is like to be a kid growing up in Alaska. The story ends with a display of the aurora borealis, G-d’s own festival of lights.

6) Hanukkah Hop by Erica Silverman: The warm, sunny images of happy Hanukkah revelers will surely break the winter chill. Fun rhymes and a retro tone come together in this Hanukkah jewel. The singsong rhythm of this book will have your little ones doing the Hanukkah Hop in no time.

7) The Borrowed Hanukkah Latkes by Linda Glaser: This touching tale of a young girl reaching out to her lonely elderly neighbor and helping her share in the joy of Hanukkah teaches children the true spirit of the season.

8) A Different Light: The Hanukkah Book of Celebration edited by Noam Zion and Barbara Spectre: The definitive Hanukkah resource book for adults and children alike. This book bills itself as a “how-to guide to a creative candle-lighting ceremony: blessings, songs, stories, readings, games and cartoons to engage adults, teenagers and children on each of the eight nights.” There really is something for everyone, from a fascinating chapter on the history of Hanukkah, delicious recipes from across the Jewish diaspora, essays on modern-day Maccabees, writings by contemporary Jewish thinkers, and sections on the origins of both gelt and dreidels. There is even a FAQ with answers to some commonly asked Hanukkah questions, such as “Which is the correct direction for lighting the candles?”

Richard Geller is a freelance writer. He lives in Portland with his wife and three children. His son Leo (age 9) contributed to this article.