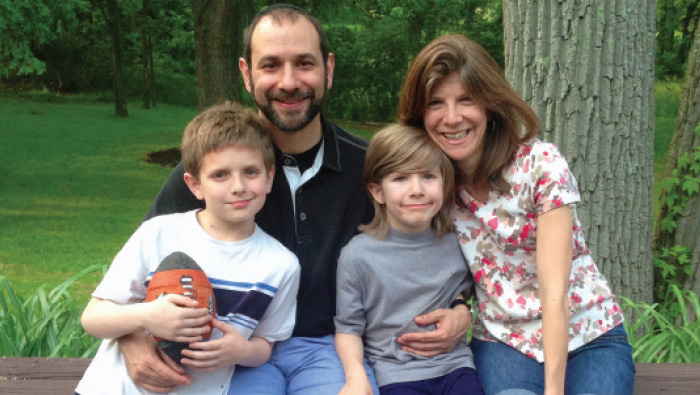 On Aug. 15, Rabbi David Kosak became the third senior rabbi of Congregation Neveh Shalom since the congregation was founded by the merger of two Conservative synagogues in 1961.

Rabbi Kosak considers it a bonus that the congregation has such a rich history with its previous leaders.

“The way to succeed is to follow successful people,” he says. “People have positive experiences and relationships with their rabbis, so I don’t have to overcome any antipathy. Tremendous work has been done by my two predecessors … and I’m blessed they are still in the community.” He adds he intends to turn Rabbi Joshua Stampfer and Rabbi Daniel Isaak, both of whom continue to serve the congregation as rabbis emeritus, for “insight and history.”

Previously the senior rabbi of Congregation Shaarey Tikvah in Beachwood, OH, a Conservative congregation of about 250 families, Rabbi Kosak says his career aspiration was “to get the honor of helping a larger congregation.” The fact that Neveh Shalom is in Portland, his wife Laura’s “fantasy place to live,” sweetened the deal.

“This work is about fit, whether you feel you share an outlook,  and human relationships,” says Rabbi Kosak. “Being in a larger community, my goal is to help us pursue shared visions. … I feel we have an ‘A team’ of professionals (at Neveh). To have talent and passion will be really helpful.”

Calling this an exciting time in Jewish life, he wants to use the tradition to enrich people’s lives. He feels Judaism has a lot to offer to both Jewish people and the world in general. “Jews gave the world ‘the weekend.’ The Romans made fun of Jews for taking a day off.” Now he feels the world can likewise benefit from the Jewish tradition of avoiding technology one day a week. “In this electronic era, people – Jews and non-Jews – are choosing to spend one day untethered. A day dedicated to community, to family, to appreciation is healthy for everyone.”

He also believes the Jewish tradition of the maggid, a storyteller, has a lot to offer the modern world.

“I think we are in an overly cerebral age,” he says. “I think stories and myths work in archetypes and have a way of informing us and cutting through our spiritual, emotional and even intellectual defenses.”

Generally he doesn’t believe that his role includes that of political commentator. Unless a Jewish lens “will shine light on an issue,” he does not intend to be involved in political issues. Though he notes he has been involved with Keshet, an LGBT advocacy network, for a number of years. Since “the law of the land is the law of the land,” the Jewish stance on gay marriage has been simplified.

“My job is to bring the inspiration of Jewish tradition to as many people as possible,” he says. “My goal is to bring Jewish light and wisdom tested over thousands of years to help people live their lives better.”

As a former professional chef, he says he sees his second career as a rabbi as having a great deal of overlap; he has moved “from feeding bodies to feeding souls.”

He has a bachelor’s degree in philosophy from New York University and a master’s in rabbinics from the American Jewish University (formerly the University of Judaism). He pursued advanced studies at Mechon Schechter, Hebrew University, Yakar Torah Center for Tradition and Creativity, and the Hartman Institute, all in Jerusalem. He received his rabbinic ordination in 2006 from the Ziegler School of Rabbinic Studies in Bel Air, CA.

Laura has degrees in Jewish education and family and systems therapy. She is a family therapist with a background in human resources.

In July the couple moved to Portland with their two sons, ages 8 and 10, and Siberian forest cat (one of the few hypoallergenic breeds of cat in the United States). Finding a home that is just a short walk through the woods to get to the synagogue was a pleasant surprise.